A STAGED re-entry into the tragic Pike River mine may start as early as next month – with the New Zealand government okaying a plan to explore the main tunnel. 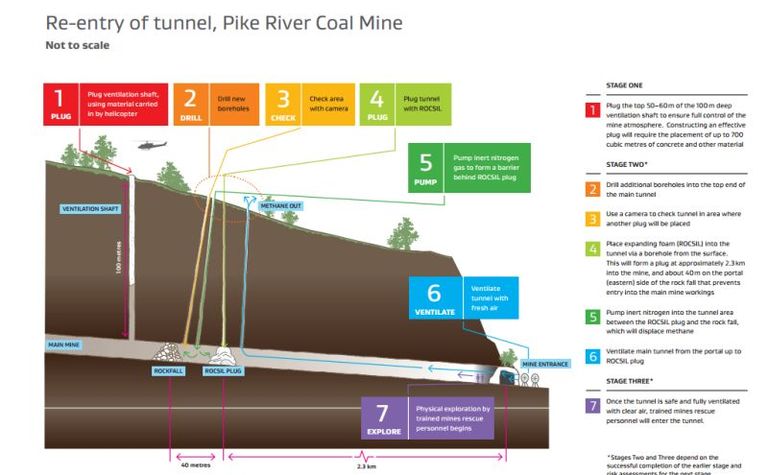 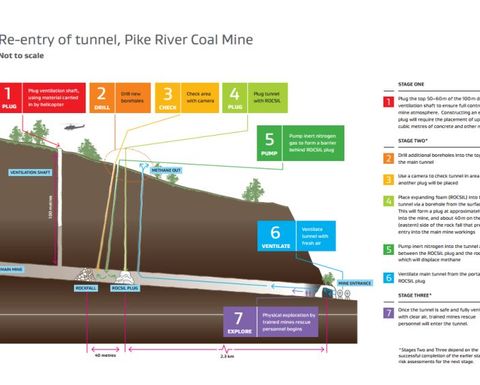 A diagram depicting the planned re-entry of the Pike River tunnel.

Energy and Resources Minister Simon Bridges announced Tuesday that the government would fund the re-entry, which was expected to cost about $NZ7.2 million ($US5.6m).

State-owned Solid Energy took ownership of the mine following the November 2010 disaster that killed 29 men. The company said Tuesday that it gave an undertaking when it bought the assets of the former Pike River Coal company that it would do its best to develop a safe plan to explore the main tunnel.

For the families of the victims, waiting three years for a chance to attempt to retrieve the bodies of their loved ones has been agonising.

Spokesman for the Pike River families Bernie Monk told ILN that the families knew all along that the job could be done.

“It was great to be in the meeting today and see a few tears shed, and smiles on the faces of the mothers and the wives. It has been a long time coming.

“All the families basically want … is one shot at going down the mine to retrieve their men if they were in the drift.

“No one has ever done it and until it is done they will never be happy. And you can understand that.”

The plan was approved last week by the board of Solid Energy and the government's High Hazards Unit.

“Our criteria are that any re-entry into the tunnel up to the rock fall is safe, technically feasible and financially credible. Safety is paramount, and the High Hazards Unit of the Ministry of Business, Innovation and Employment has reviewed the plan and is comfortable with it,” Bridges said in a statement Tuesday.

The re-entry will be conducted in three stages and, dependent on the success of the first two, could see a team of trained New Zealand mines rescue personnel travel 2.3km into the main tunnel, also known as the drift, close to a rock fall blocking the entrance to the main mine.

During stages one and two, the mine’s ventilation shaft will be plugged, while new boreholes will be drilled for surveillance and gas drainage. The end of the tunnel will be filled with a barrier of expanding foam, called ROCSIL, before being pumped full of nitrogen to force out any methane.

Finally, before rescue personnel enter the mine, the tunnel will be fully ventilated with fresh air.

Solid Energy chairman Mark Ford said approvals by the Solid Energy Board and ongoing monitoring would be required for all stages of the project to ensure the safety of those going in.

"We have to be satisfied that the mine atmosphere can be effectively managed before we let anyone back into the tunnel.

“As we will be working with uncertain outcomes at every step of the way, any major variations from the original plans will have to be re-assessed as to their relative safety and any major variations will also need to come back to the Solid Energy board for further evaluations of the risks and their acceptability,” Ford commented.

Bridges reiterated that this operation does not include entry into the main mine workings and the possibility of that exploration cannot be confirmed yet.

“The government cannot comment or speculate about re-entering the main mine until the tunnel re-entry has been successfully achieved,” Bridges said.

But the families, Monk says, are focused solely on their current opportunity, and not what lies beyond it.

Monk added that the families are hopeful that some of the men’s bodies will be found in the drift.

“Well you have to realize that two men got out alive. There is a big possibility that with the end of shift, there could be bodies in the drift.

“My son is in my heart always and if I don’t find him, I can accept that but I will do my utmost to get everyone else’s bodies out. Over the last three years my life has been to do what the families want me to do and I am going to do that right to the end.”

Bridges said the work is weather dependent but it is hoped it will start in October. The duration of the work will depend on how each stage proceeds but Monk said it is hoped that stage one, the plugging of the ventilation shaft, will be completed by Christmas.

New Zealand police will review any information that comes out of the mine, opening up a window for the police to lay charges against Pike River Coal.

A police investigation that concluded in July announced that they would not lay any individual criminal charges over the disaster due to “the lack of any causative link to the specific events which led to the explosion” but said that the decision was based on currently available information and there may be a chance that the case could be reopened if more information was unearthed.

“It is possible that at some point in the future re-entry to the mine might be achieved allowing a scene examination to be completed,” Detective-Superintendent Peter Read, who led the inquiry, said.

"However, I stress there is no certainty that this would produce any new relevant information. Even if new information was identified, there is no guarantee that it would lead to a future prosecution.”