A tough week for coal

IS THE closure of BHP Billiton Mitsubishi Alliance's Norwich Park mine in Queensland a warm-up act for the rest of the Australian coal industry? Hogsback hopes not but events this week point to tough times ahead.

In the US, major coal companies are watching their profits disappear as cheap natural gas extracted from once unproductive shale wins an increased share of the electricity generation business.

In Australia, rising costs and the threat of a fresh government attack in next week’s budget have caused Rio Tinto, one of the country’s biggest coal producers, to threaten the cancellation of the planned $2 billion Mount Pleasant project.

In Europe, the price of thermal coal at the Dutch port of Rotterdam slipped to $US93 a tonne, its lowest in 18 months.

It is thanks to an oversupplied market caused, in part, by US miners chasing export markets.

There was some good news in a gloomy week with coal demand in China and India showing no sign of slowing.

The combined demand from the fast-growing leaders of Asia’s industrial revolution is likely to require an extra 300 million tonnes of thermal coal annually and for the pace of demand growth to remain strong.

Looked at dispassionately, coal can be seen as a barometer of the way the power (and wealth) of the world is migrating from the west to the east.

Not that this aerial view of global politics is of much comfort to people working in the coal industry today.

What they want to know is whether Asian demand will compensate for the two big negatives bearing down on coal demand.

Put another way, can India and China compensate for the natural gas boom rocking the US energy market and the severe economic decline of Europe.

There is no easy answer, which is why The Hog reckons the next few years could be tough for coal as the twin forces of supply (too much) and demand (perhaps not enough) push prices around, making it hard for management to know the best place for capital allocation.

In Australia, the challenge is to find a way through the complex equation of rapidly rising costs and the threat of additional handicaps in the form of the carbon tax and budget changes, such as the rumoured end of the diesel-fuel rebate.

Costs caused BHP Billiton to pull the plug on its jointly owned Norwich Park mine.

In briefings with analysts ahead of Rio Tinto’s annual meeting, Albanese is reported to have listed a series of cost rises that have hurt the company’s coal operations, including rising wages, inflexible labour rules, the high Australian dollar, the carbon tax and competition from other segments of the resources sector for skilled professionals.

Like BHP, the key issue for Rio Tinto is where to get the maximum return for its shareholders.

The US challenge appears, at first glance, to be different.

It is not. The problem for big miners such as Arch and Alpha is their profit margins have been hit hard by cheap shale gas.

Back in the 1980s, coal accounted for 57% of US electricity generation.

Today that number has dropped to 42%.

It is tipped to continue falling as power companies switch to gas, which has collapsed in price from more than $US12 per million British thermal units to around $2/MBtu.

Exports have become critical to the survival of US coal companies. In doing that though, they have helped drive down the global price, which is why the Rotterdam price fell to $93/t this week and why the price at the Australian port of Newcastle is hovering around the $100/t mark.

So far unsaid in any of the commentary on the moves by BHP and Rio to prune their thermal coal business units in Australia is the potential “importation” of the natural gas problem, which has severely damaged the US coal sector.

That development, an Australian version of the US shale gas industry, could be moving closer, with investment bank Morgan Stanley doubling its estimate of the level of investment in shale gas exploration in just six months.

Last June, the bank reckoned $500 million would be spent on the Australian shale gas search.

Last week, it upped the estimate to $1 billion.

It will take several years for shale gas exploration to convert a theory into the production of a fuel which will compete with coal.

However, it would be unwise of the coal industry to not start planning for that event.

A window was broken and a golf ball-sized rock landed near a person in the car park. 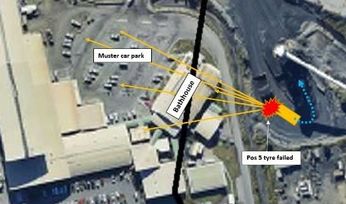 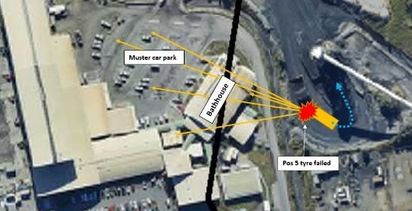 Idemitsu turning old Muswellbrook mine into a power plant