German pipe manufacturer Hamacher put a range of high-pressure pipes offering an alternative to flexible hoses on show at MINExpo in October.

German pipe manufacturer Hamacher put a range of high-pressure pipes on show at MINExpo in October. The pipes offer an alternative to flexible hoses used for pumping stations and shield support in longwall mining. To date no installations of the pipe have been made in Australia but a major Australian coal producer is understood to be assessing the products for future application in a longwall mine.

"This Hamacher high-pressure system has for the first time made it possible to lay pipes underground all the way to the coalface. Since 1998, more than 30 faces are running in Germany, Poland and the United States with these HyPres pipes on the face."

The first complete installation was at the Auguste Victoria mine in Germany. The results show a reduction in pressure losses of 30-50%, Fusser said.

Hamacher's pipe system combines the advantages of zinc-coated pipe with those of a stainless steel or polymer pipe, while excluding the negative aspects of both. The new HyPres inliner system is produced by drawing a thin stainless-steel pipe or inliner through a hot galvanised pipe which is designed to cope with the required levels of pressure. The inliner is then forced under high pressure against the inner wall of the galvanized pipe, creating a double-walled pipe system.

Because the inliner's only task is internal protection, it can be made to a thin wall thickness, which makes the prices about 80% less than conventional stainless-steel pipe. The external zinc coat protects against external corrosion while the stainless steel inliner prevents internal corrosion and eliminates problems caused by zinc soaps.

Fusser said the modular structure of pipe components, which fit together with ZK couplings, make transport and installation of the pipe substantially easier.

"The strength of this system is its ability to combine the advantages of all the various elements: minimum pressure losses, optimum safety, long service life and maximum compatibility, while at the same time offering cost reductions of up to 50%."

Makes HDPE pipe on site and spools it out where it is needed. 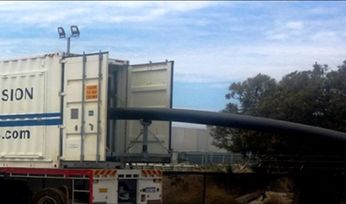 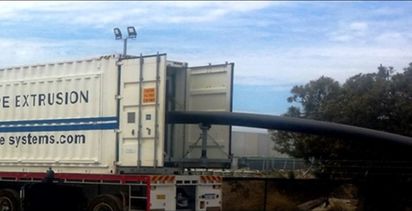