AFFINITY Coal has copped the brunt of the Mine Safety and Health Administration’s June impact report, racking up 13 citations, 10 unwarrantable failure orders and one imminent danger order during one inspection.

In its July program MSHA handed out 149 citations and 16 orders during special impact inspections at nine coal mines and four metal/nonmetal mines.

MSHA said when it arrived at Affinity Coal’s Affinity mine in Raleigh County, West Virginia, it secured communications from the surface to prevent the possibility of advance warning.

The imminent danger order was issued when inspectors entered the mine and witnessed a foreman riding as a passenger in the bucket of a rubber-tired scoop in a wet, rough and uneven entry.

Riding in a bucket violates an MSHA safeguard issued during 2012, as the miner could be thrown from the bucket and crushed.

There have already been two fatalities involving scoops this year at the Affinity mine.

Five of the unwarrantable failure orders were issued for violations of the mine’s ventilation plan.

“These conditions have the potential to result in methane and dust accumulations that may result in an explosion or fire and expose miners to conditions that can lead to black lung.”

Other similar conditions of airflow significantly below the mine’s ventilation plan requirements were found by MSHA inspectors.

Inspectors identified 10 areas where the operator failed to apply rock dust along the mine roof and ribs for up to 80 feet, creating conditions that exposed miners to potential ignition and explosion hazards.

The mine was cited for inadequate pre-shift examinations.

On top of this, one unwarrantable failure order was issued for a violation of the roof control plan where the operator did not install reflectors to signal the last row of roof supports.

Warning signals are required to prevent miners from entering areas where the mine roof is not supported and could collapse on them.

The monthly inspections, which began in April 2010 in response to the fatal explosion at the Upper Big Branch mine, involve mines that merit increased agency attention and enforcement due to their poor compliance history or particular compliance concerns.

“While many mine operators have improved working conditions at their mines, we continue to see unacceptable conditions at some mines that put lives at risk,” MSHA assistant secretary Joseph Main said.

“The types of conditions found by inspectors during this surprise inspection are the type that can expose miners to methane and coal dust explosions and black lung and cannot be tolerated in the mining industry.”

AFFINITY Coal has copped the brunt of the Mine Safety and Health Administration's June impact report,... 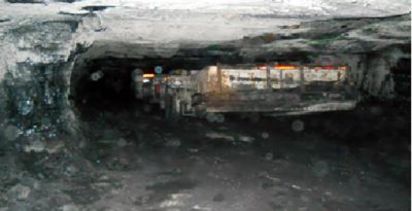