SPECIALIST lubricant supplier, Quaker Chemical, has just launched a new synthetic longwall fluid, Quintolubric 818-03, which the company hopes will provide a step-change over other comparable technologies.

Quaker Chemical (Australasia) general manager, Harold Kraus, said the new fluid is a true solution, not an emulsion, and is readily biodegradable. It is very stable in all water types, and contains no mineral oil. That lowers the environmental risk and improves occupational health and safety by eliminating bacteria contamination risk.

The fluid, with OEM approval, was introduced into BHP's Kenmare longwall mine in October last year. After six months usage, equipment reliability and availability has significantly increased.

The impetus for the product’s development was a problem with premature failure of solenoid valves in the roof supports of a major equipment supplier. International research between the OEM and Quaker chemists over a two year period found that oil-based emulsion fluids were contributing to the valves sticking by corroding the internal surface of the valve, and forming corrosion products which restricted its free movement. The new fluid has been found to be highly protective of solenoids and provides a simple chemical solution to the problem.

Quaker differentiates itself from its major competitors by offering value-added products that are highly protective of equipment and offer high environmental protection. Kraus said the cost of fluids was like the tip of an iceberg. The hidden costs of less competent fluids included production delays ($500-$1500 per minute) high filter consumption, and premature overhauls or replacement.

The Quaker Chemical Group is listed on the NYSE and has a turnover of $US 270 million per annum. The company established a presence in Australia 1964 on invitation of BHP to supply quality critical lubricants into Australian steel mills. After entering the Australian longwall market in 1985, the company now supplies fluid to 30% of Australia’s longwall mines. Kraus said the company is the fastest growing supplier in the industry and hopes to increase its market share to 40% over the next few years as the advantages of technical excellence in longwall fluids is more widely appreciated.

Kraus said the Westcliff longwall, installed in 1982, was still in use and had completed 50,000 cycles, partly attributable to the use of Quaker longwall fluid.

Quaker longwall fluids are sold through an alliance agreement with Shell who can then offer total product supply of fuels and lubricants to longwall operations. A typical longwall will use between 100 tonnes and 400t of longwall fluid per annum. Kraus said consumption levels were dependent on maintenance attitudes, equipment size, geological conditions and the cost of lost production incurred to repair leaks. 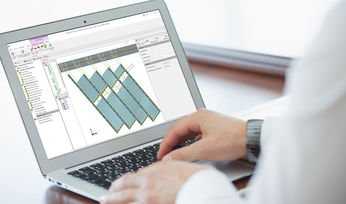