On the circa-$1 billion acquisition of Rio Tinto’s vast Clermont coal mine in Queensland (October 2013), Freyberg said Glencore paid a good price and generated “huge value”.

He said $240 million of net present value was achieved by Glencore at the operation with $100 million from expanding production by 1 million tonnes per annum to 13Mtpa and $80 million coming from a decision to bypass using the wash plant through blending and other strategies.

Long-standing issues with a crusher at the mine could be resolved in forthcoming months with Freyberg revealing that this expensive equipment might effectively be replaced by two to three dump trucks.

In regards to the recent JV struck to achieve synergies between Peabody’s Wambo operation and Glencore’s United mine, Freyberg said a double digit internal rate of revenue was possible that started with a “three” – indicating a startlingly IRR of beyond 30%.

He commended the Glencore team that eventually got New South Wales environmental approval for the Bulga optimisation project. The coal chief credited open and honest community engagement for overcoming the complex, “cumbersome” planning regime in the state.

Freyberg said the Ravensworth North project was delivered on time and below budget. The Ulan West underground coal project, also in NSW, was in this category too.

Freyberg further said this project had the “best ramp up of any longwall we have ever had”.

He joked that the mine had to be slowed down for “over producing” in reference to the looming three-week Christmas shutdown Glencore has in place for all of its Australian coal sites this year.

On the “bad time right now” in coal markets, he said Glencore’s global average target of $US50/t cash cost for thermal coal production had been “overshot” due to “currency weakness”.

This also showed that about 25% of seaborne thermal coal supply remained cash negative, with Glencore’s American billionaire trading chief Tor Petersen confirming that this data was up to date in relation to Monday’s oil prices and foreign exchange rates during question time.

The key takeaway was that a fair degree of global seaborne thermal coal supply could still “fall off in a permanent way” in the words of Freyberg.

In terms of metallurgical coal, Glencore is forecasting a more than 2% fall in global demand over the next two years leading to “further supply reductions”

However, Peterson viewed that demand for hard coking coal such as that produced from Glencore’s Oaky complex was increasingly tight while there was particular oversupply in the low volatile PCI-grade of metallurgical coal.

Seabed mining off the NT could become a reality. 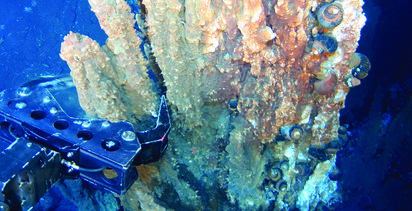 Glencore gets into COVID-19 vaccine hunt