THE controversial Carmichael coal mine and rail project in Queensland’s Galilee Basin, has employed more than 1500 people and awarded more than $1.5 billion in contracts – defying the negative effects of the COVID-19 pandemic. 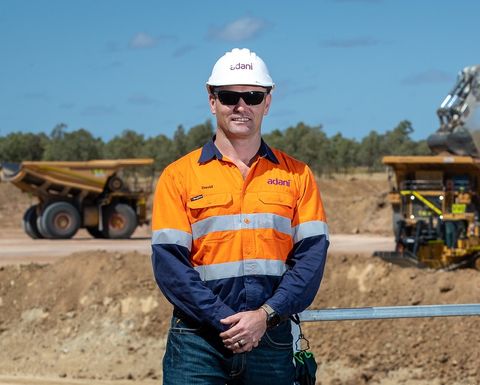 Adani Mining CEO David Boshoff at the Carmichael mine site in Queensland.

Adani Mining CEO David Boshoff said with Carmichael's construction set to continue through into 2021 Adani expected that the number of people employed to exceed 1500 direct jobs.

"We are proud to have made good on our promises to Queensland, and especially regional Queensland," he said.

"The Stop Adani movement said our project would never go ahead and would never create a single job. We have proved our opponents wrong."

Boshoff said because Adani worked with smaller, private, and Queensland-based contractors and suppliers it had been able to keep working through the COVID-19 pandemic with appropriate measures in place.

"More than 88% of our contracts are being delivered in Queensland and have been spread across all corners of the state to give as many regions as possible the opportunity to benefit from our project, while also enabling us to tap into the highly-skilled construction and resources industry workforce that Queensland possesses," he said.

The project's contractors and suppliers are from almost every corner of the state.

The rail camp operations are based in Collinsville; earthworks and civil works contractors are from Townsville and Rockhampton; fuel supply from Townsville; telecommunications from Mackay; rail track laying and rail camp construction from Rockhampton; and quarry contracts have gone to Toowoomba.

The construction of the Carmichael Project has been underway in earnest since approvals were obtained in June 2019 and the project is on track to produce coal in 2021.

"Our mine and rail camps are nearing capacity, and altogether we have more than 1500 people working on the project at site, and at our Brisbane, Townsville and Rockhampton offices.

"And this is just the construction phase.

"The permanent roles will come with the operation of the mine and rail, bringing prosperity to the people and economies of regional Queensland for decades to come." Boshoff to move to Adani