Another player is looking to break into the large mining tyre market, and it looks like coming from an unexpected place. By Noel Dyson When the mining boom was in full swing, tyre makers were coming from everywhere to try and get a piece of the action. Belarus, China. Firms were springing up everywhere.

Now, with the mining boom a fading memory, an Indian firm is poise to try to break into the market.

Some may think it left its run a bit late but, as any visitor to the sub-continent will attest, they do things differently there.

Take the media event to “launch” BKT’s state-of-the-art tyre plant in the west Indian state of Gujurat. There was the Gujurati pipe band slyly slipping that lesser known Scottish battle hymn We Will Rock You in alongside more traditional Highland fare such as Scotland the Brave. Then there were some media members who, after a couple of days of living off good Indian food, found a new appreciation of a certain Johnny Cash song.

For BKT, its marketing proposition to the market is simple.

It plans to go for the middle ground, positioning itself below the market leaders Bridgestone and Michelin but above the numerous low cost options that abound.

If it can get its costs per kilometre figures close to those of the market leaders it could have a winning argument.

In these days when procurement officers are looking to cut costs wherever they can, it could prove to be a winning argument. That argument relies on the tyres performing as well as BKT claims they will.

The one thing standing in the way is the glut of tyres out there.

Things are far changed from the days of the mining boom when miners were so desperate to get tyres they were even digging up old ones from dumps in the hope they could use them to keep their trucks going. With so much equipment parked up, there are plenty of tyres to be had. Indeed, Michelin recently idled a plant in the US.

At the moment the BKT plant only turns out large mining tyres up to a 45 inch radius. The company does have presses that can handle up to 51 inch tyres and may even go up to 57 inch if the market demands it.

Those 57 inch radius tyres are the kind that go on the industry staple 220t payload trucks.

BKT technical director Dilip Vaidya told Australia’s Mining Monthly that the company did not have any plans to produce 63 inch tyres – the type that go on the largest haulers – because the demand just was not there.

For BKT its plant 17km outside the Gujurati town of Bhuj and about 60km from a port has been a bit of a gamble.

From this plant Indian tyre company BKT, which started out making bicycle tyres in the 1950s, aims to take on the off-the-road tyre market and gain up to 45% of its business from mining tyres.

It is, however, early days for the large mining tyre side of the BKT business.

The first batch of 45 inch tyres has gone to Caterpillar for testing.

To get the plant off the ground the BKT board first had to be convinced. Once it was on board and had signed off the $500 million investment came the challenges developing such a remote plant in a desert region devoid of infrastructure brings. Just keeping people to work on the plant was difficult. There were no roads, no water, no electricity. Oh, and with Gujurat being a dry state, there is no booze in Bhuj.

When things were starting to take shape it was discovered the volcanic soil the plant would be sitting upon could not provide a sufficient footing. About 6m of it had to be dug up.

However, BKT persevered and ended up with a pretty impressive plant.

It boasts equipment from European and Chinese manufacturers and attention has clearly been paid to quality. Each batch of compound goes through stringent tests before it can make it to the tyre making machines. The plant’s floor was pristine.

In the large mining tyre area there is both x-ray and sherography testing facilities.

The plant is producing 125 tonnes of tyres per day but could produce much more.

Not all are mining tyres of course. The company makes a host of tyres for a range of industries, including agriculture.

The plant will also have a research and development centre – it was partially completed when AMM visited in December – attached to its own test track.

That track has been used to put a range of agricultural tyres through their paces already.

What could have been misconstrued as the BKT precision tractor driving team going through their paces, weaving through cones on the track, was actually some tyre durability testing. 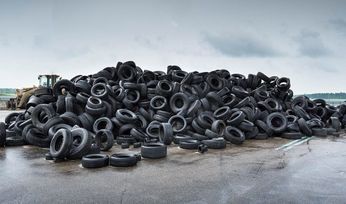 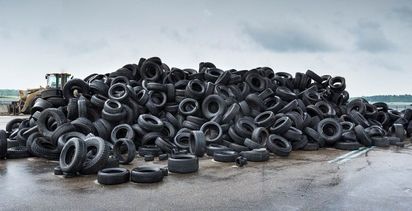 Ausdrill to tread warily in Americas

Hovermap takes flight where even angels fear to tread