KOMATSU Australia has released its largest ever electric-drive haul truck the 980E-4, which has a 363t payload capacity – the magic 400 in short tons. The most obvious question about the truck is why? It seems the most popular size is around the 220t payload which the Komatsu 830E and the Caterpillar 793 trucks fill so well. Caterpillar has stepped away from producing the 363t MT6300 trucks it inherited through its purchase of Bucyrus, leaving only a handful of producers in the market.

The simple answer is demand.

Komatsu Australia national product manager, mining Scott Harrington told MiningMonthly.com that there had been demand for that sized truck in Australia.

“Customers with long-term outlooks and mine plans understand the economies of scale larger trucks bring,” he said.

There is also the match a truck that size has with some of the loading tools coming out.

Harrington said there were rope shovels on the market with the capability to deliver 120t in a pass and hydraulic shovels that could deliver up to 90t in a pass.

Then of course, there was the fact that Komatsu did not have an ultra-class truck of its own. Its nearest was the 960E, which boasts a 325t payload. That is only about 20t shy of Caterpillar’s 797 haul truck.

One of the obvious markets for a 363t truck is the oil sands and Komatsu already has some of its 980Es running around there.

Australia’s coal industry is another interested in such a large capacity truck.

“The first commercial fleet of the new 980E-4 has now begun delivery at an overseas mining operation with an initial fleet of 30-plus units to be delivered this year,” Harrington said.

“We are also working closely with a number of Australian customers for the introduction of this new model in the near future.”

MiningMonthly.com also understands CITIC Pacific’s Sino Iron project has showed interest in the trucks. It runs Terex MT6300s – it was the only Australian customer for them – and is looking to replace some of that fleet. The 980E-4 could make a good replacement.

Most of the components on the 980E-4 are common to the 960E. The 980E-4 does have larger wheel motors and different hydraulic components.

Those GDY108C wheel motors, based on GE Mining’s GDY108B design are longer, to accommodate the 980E-4’s 1117.6mm rims and incorporate a number of gearing and bearing design changes.
The truck is powered by a Komatsu SSDA18V170 Tier-2 engine rated at 2611 kilowatts. In combination with its GE Mining dual insulated-gate bipolar transistor electric drive system that provides a top speed of 60kph.

Harrington said the Komatsu engine provided one of the lowest brake-specific fuel consumption figures in this truck class.

As with other trucks in Komatsu’s ultra-class electric drive haul trucks range the 980E-4 was designed, developed and manufactured by Komatsu America Corp at its Peoria operation in Illinois.

“Komatsu was the first to introduce AC drive systems for ultra-class mining trucks in 1996 and has ever since continued to demonstrate to our customers in Australia and globally the incomparable performance and reliability that Komatsu trucks provide,” Harrington said.

He said the hoist cylinders, steering cylinders and suspension cylinders all had increased capacity.

Harrington said Komatsu had continued its maintenance-friendly approach through such design features as:

The 980E-4 can also be fully integrated with management systems such as Modular Mining’s Dispatch and Minecare products.

The Mackay potash project is in central Australia on the WA-NT border. 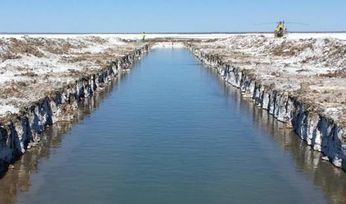 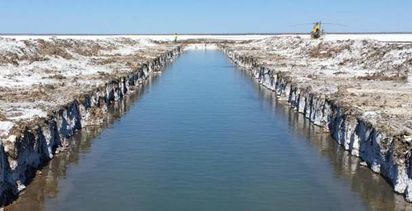