Do you really know how hot your coal is?

THIS was the question raised at the March Bowen Basin Geologists Group meeting on coal quality held at Stanwell Power Station by Dr Basil Beamish, senior lecturer in mining engineering from the University of Queensland (UQ). Beamish is also currently visiting research fellow at SIMTARS.

Most people in the audience were expecting a tired old rendition on calorific value of coal, but were pleasantly surprised to hear about the pros and cons of identifying the hazard of spontaneous combustion in advance of mining.

Beamish pointed out that it was crucial to understand these kinds of risks as stated in the report from the Moura Inquiry: "In response to the Moura No 2 incident … there will no doubt be an early spate of training, the conduct of seminars and symposia and, probably, the production of more publications. The immediate past track record is that these measures will be effective for somewhere around a decade with fundamental problems beginning to re-emerge somewhat earlier." (Windridge, 1996).

The fundamental problems may be with us already, according to Beamish, with dilution of corporate knowledge through technical staff turnover, redundancies and a lack of transfer of technical knowledge to the workforce.

“Training is one thing, but understanding the complexity of spontaneous combustion has not been reinforced,” he said. “There is a technical gap between current training courses and meaningful results for hazard assessment in advance of mining. Recent reviews on this topic are already out of date. Technical personnel are being left behind to work with partial data and are not being catered for to advance their professional development in this area. The big risk here is that the industry will repeat itself as prophesised in the Moura report.”

Beamish went on to describe appropriate tests for coal combustibility and what the numbers really mean. Currently in Queensland, there are three scales of adiabatic testing available. These are small-scale (100-200g samples), medium-scale (40-60kg samples) and large-scale (16t samples).

At the small-scale the common laboratory tests are average self-heating rate (R70), crossing point temperature (CPT), relative ignition temperature (RIT) and a calculated value of minimum self-heating temperature (SHT) based on coal analytical data. The most realistic of these tests to a heating is the R70. It simulates the worst case scenario. Some operators view this value with scepticism, as they say "we have a so-called high R70, but have never had a heating". Beamish said what this really means is, “congratulations, you are doing everything right to control the coal and prevent it from self-heating. This information needs to be shared with the rest of the industry.”

R70 research at UQ, in collaboration with Callide Coalfields, has been able to show distinct relationships with rank, mineral matter and moisture content of coal. The results are very precise and as a result have made it possible to model the self-heating hazard of Callide coal in advance of mining. These tests take in the order of a couple of days to complete.

At the medium-scale, a 2 metre test column is now available at UQ that uses approximately 57 litres (40-60 kg depending on particle size) of run-of-mine sample. This equipment is ideal for simulating coal in goaf areas, stockpiles, power station bunkers, seam profiles and blending of coals. By using as-received coal, effects of moisture and mineral matter in the spontaneous combustion process are shown and true off-gas is monitored during the heating development. Hotspot migration through the column towards the air inlet is also clearly shown and the time to thermal runaway measured.

A typical Callide test is shown in the figure. General timeframes for testing are in the order of days to weeks.

At the large-scale end, a 16 tonne chamber is available at SIMTARS. Again bulk samples are tested as-received and monitoring of heating development is performed at various locations throughout the chamber. General timeframes for testing are in the order of months.

Beamish summed up by showing that UQ and SIMTARS are working in collaboration to establish clear links between the three scales of spontaneous combustion testing. By doing this they will be able to provide industry with better guidelines for spontaneous combustion hazard assessment planning. In 2002 mining student projects are using the 2-metre column at UQ to assess:

In addition, work on Callide coal using fresh cores for R70 testing and ROM coal for column testing is continuing. Research applications are also being submitted to the ARC Linkage Projects Scheme and ACARP with support from several mines and Callide Power Station. UQ and SIMTARS are also promoting two new initiatives as part of their commitment to a National Strategy on spontaneous combustion as recommended in the Moura Inquiry. These are:

1. A one-day workshop on “Progress in Spontaneous Combustion Testing” to be hosted by UQ and SIMTARS in Brisbane early 2003. The workshop will provide coal industry personnel with the opportunity to see first-hand the range of test work being conducted at SIMTARS and UQ, both in a fee for service capacity and as teaching and research tools. Site visits to inspect tests in operation at small- (150g), medium- (45kg) and large-scale (16t) are planned.

2. A two-day Symposium – SPONCOM 2004, on “Managing the Hazard of Spontaneous Combustion in the Australian Coal Industry”. This has been registered as part of The AusIMM Symposium series and will provide all interested parties with the opportunity to present and exchange ideas on spontaneous combustion.

“It is almost eight years since the last major coal mine disaster at Moura in Queensland. The coal industry needs to move forward on the issue of spontaneous combustion and the collaborative test work between UQ and SIMTARS provides the opportunity to obtain some practical answers for both coal producers and coal users,” Beamish said.

Anyone interested in any of the areas covered in this article should contact: Dr Basil Beamish, Senior Lecturer in Mining Engineering ,Division of Mining and Minerals Process Engineering, The University of Queensland, BRISBANE Q 4072 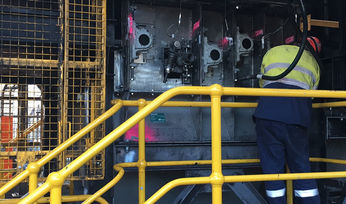 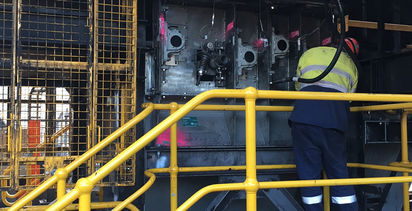