KGL Resources’ Jervois copper-silver project could pay for itself in 3.2 years, a second feasibility study has shown. 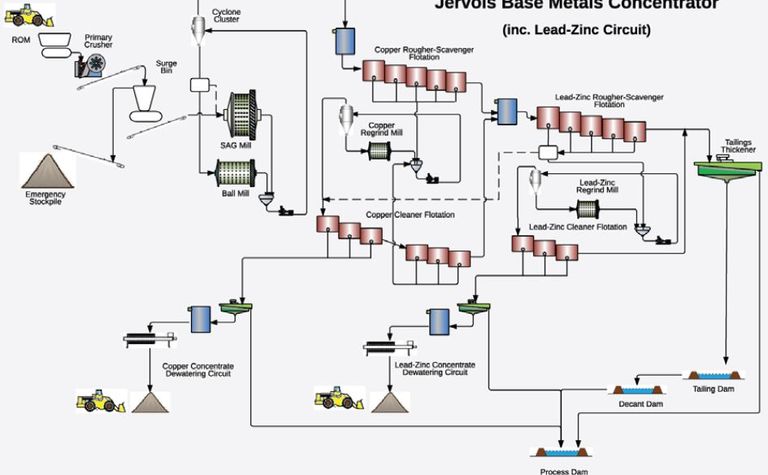 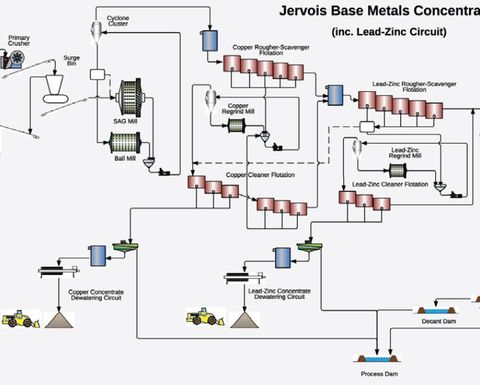 The proposed concentrate production flow-sheet for the Jervois copper-lead project.

The initial PFS, announced in December 2014, found Jervois to be technically and commercially feasible.

This study has put a bit more meat on the resource bones and found the project will have a capital cost of $A189.5 million.

It shows Jervois to be a conventional copper flotation project with strong economics, a cash cost of US88c/lb ($A1.20/lb) and a C3 – including depreciation, amortisation and royalty – cost of $US2.13/lb.

With the PFS completed, PricewaterhouseCoopers will start the hunt to find a project equity level partner to help KGL develop Jervois.

The plan is to complete the bankable feasibility study in 2016, start construction in 2017 and have first concentrate produced in 2018.

KGL managing director Simon Milroy called Jervois, which is about 380km by road north east of Alice Springs in the Northern Territory, “among the lowest cost of the world’s probable new mines”.

He said the PFS benefited from upgrading the mineral resources and increases in silver, lead and zinc tonnages.

Milroy said Jervois was a relatively cheap project to develop.

“We’ve noticed a small reduction in capital cost items and labour,” he said, noting the biggest benefit for the project came from its high grades.

“It will be a small plant producing more copper,” Milroy said.

“We’ll be feeding 1.5% copper into the plant from the open pit for the first couple of years. Milroy said that was a high grade for an open pit project in Australia.

“When we go underground the grade doesn’t go up much but we get by-product credits,” he said.

The project will consist of open pit mining of several deposits followed by underground mining.

Those mines will feed a 2.2 million tonne per annum plant producing 80,000 to 100,000 tonnes per annum of copper concentrate plus a separate lead-zinc bulk concentrate.

This equates to an annual average production 21,000t of contained copper an 1 million ounces of contained silver.

Jervois will also produce about 179,000t of bulk concentrate at a grade of 43% lead, 17% zinc and 1069g/t silver over the life of the mine.
Open pit mining is proposed at Marshall-Reward, Green Parrot and Bellbird. The life of mine waste to ore stripping ratio for the pits is 7.3:1.

It is expected open pit mining will run for the first 6.25 years of the mine’s life.

The surface mining schedule uses a fleet of 90 trucks loaded by a Hitachi EX1900 and a Hitachi EX1200 excavator.

Mining is scheduled to start three months before steady state production through the processing plant to ensure sufficient stocks are available on the run-of-mine pad to maintain a throughput base case rate of 2.2Mtpa once processing starts. It will also aid in the blending preferences for transitional ore.

Underground mining at Bellbird has been delayed for five quarters after the completion of the Bellbird open pit to delay the capital expense associated with underground mine development.

This limits the size of the ore stockpile while maintaining a high proportion of high-grade mill feed.

It will also mean a shorter period where both open pit and underground mining contractors are on site.

Given its proposed scale it is likely larger twin-boom jumbos will be needed to develop all headings.

Ore will be bogged out with 17t load haul dump vehicles.

Those LHDs will also be needed to backfill stopes with aggregate fill and potentially cemented fill.
KGL envisages 50t haul trucks will be needed to transport material from underground to the surface stockpile or waste dump.

A large long-hole rig will be used to drill all production holes.

A dedicated charge-up unit, integrated tool carriers and a grader will be required as a support fleet.

Ground control in the proposed stopes will be a combination of installed ground support in the form of cable bolts, pillars being left in the narrower or lower grade areas of stopes and backfill, either cemented or aggregate fill, depending on the stopes’ locations.

KGL anticipates a stope ore loss of about 9% from island and sill pillars and some stope under break.

A 10% mining dilution is expected during underground mining operations.

The processing plant is designed to treat a number of ore types including the primary copper ore, transition copper ore and lead-zinc ore.

The primary product will be copper sulphide concentrate, which will also contain variable amounts of bismuth, silver and gold, depending on the ore source.

The process plant will incorporate a conventional comminution circuit comprising a primary crusher, followed by a semi-autogenous grinding mill and a ball mill. These will operate in closed circuit with a cyclone cluster. There is also the provision for a pebble crusher to be installed in the future.

Milroy said KGL was looking at a 12 megawatt LNG-fired power plant, with a 9MW average power consumption on site.

He said the company had been in discussion with various energy providers and would buy power from them “through the fence” at 23c/kilowatt hour.

The LNG will have to be trucked to the power station from Alice Springs and 14-days storage will be built on site to mitigate against any fuel supply risk during a significant rain event.

The flotation circuit design has been based on test work done by ALS Metallurgy.

The concentrate transport study concluded the use of sealed half height containers to be the most cost effective and safest way to transport concentrate from the site to Darwin or Adelaide.

Under the plan they will be trucked to Alice Springs and then sent by rail to either Darwin or Adelaide for export to Asian smelters.

This should remove the need for any enclosed warehousing at both Alice Springs and the export port.

Milroy said there was the possibility that lead-zinc concentrate from Jervois could be railed directly to Port Pirie and used in the newly-upgraded smelter there.

Copper was discovered at Jervois in 1929 during the muster of stray cattle on a track leading from Tobermorey on the NT-Queensland border.

In the 1950s the leases covering the area were bought by Kurt Johannsen, who mined copper carbonate on a small scale for the fertiliser industry and later as a flux used in the smelting process at Mt Isa.

New Consolidated Goldfields conducted the first modern exploration of the ground from 1961-65. The project was bought in 1980 by Plenty River Mining and a treatment plant designed to treat Green Parrot lead-zinc-copper-silver ore was built in 1982. The plant was commissioned but placed on care and maintenance a year later due to the sharp decline in the lead price.

Over the years companies including Normandy Poseidon, MIM Exploration and Jinka Minerals searched the ground.

KGL bought Jinka in 2011 for $12.8 million and, since then, has spent about $21.3 million increasing the size and confidence of the resource.

Resource definition drilling and geophysics at existing resources at Marshall-Reward, Bellbird, Rockface and Green Parrot has identified targets along strike and at depth that will be tested by drilling.

The PFS showed Jervois would give strong financial returns. 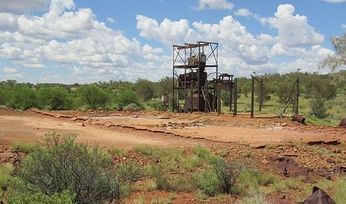 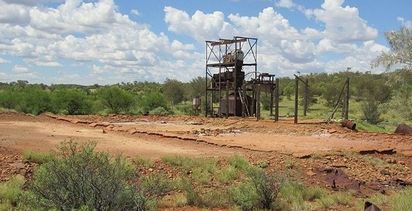 Copper on NT horizon from Jervois