MINING rates are set to accelerate, mining costs are coming down and milling throughput is set to increase at the Tropicana Gold Mine 370km northeast of Kalgoorlie, Western Australia. 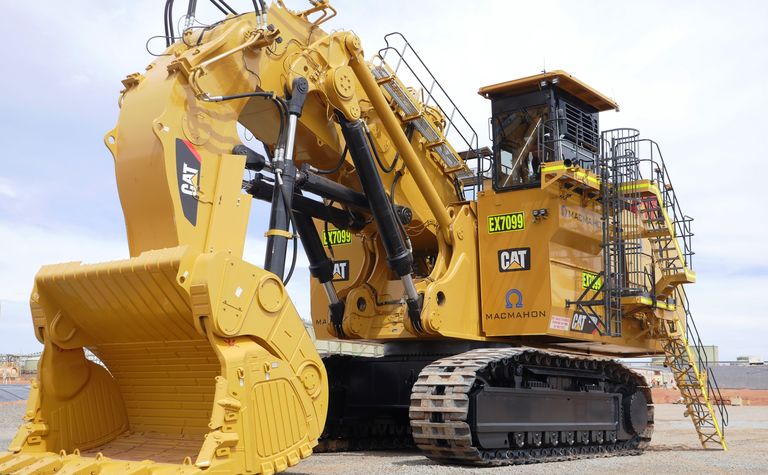 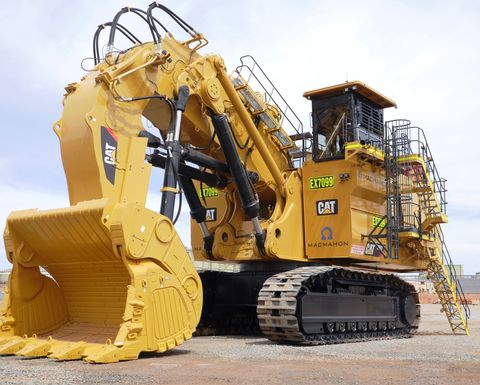 This Caterpillar 6060 could get a sister if the Tropicana Long Island plan goes ahead.

Joint venture partners AngloGold Ashanti and Independence Group have been working to maximise and optimise the operation.

An accelerated mining plan is on track to bring forward more than 200,000 ounces of gold into 2017 to 2019 through reintroducing grade streaming.

Mining rates of about 90 million tonnes per annum using conventional mining practices have delivered a 37% reduction unit mining costs since 2015 to $2.95 per tonne.

Those mining practices included adding a Caterpillar 6060 600t class hydraulic shovel, which was commissioned in November.

Should the Long Island plan go ahead that shovel will be joined by another one and another two Caterpillar 793 trucks.

Mill throughput has increased to 7.5Mtpa from original nameplate capacity of 5.8Mtpa – or 5.5Mtpa on fresh rock. There is potential to increase that mill throughput rate to 7.6-7.7Mtpa when plant improvements are completed.

The work to lift mining rates to 90Mtpa have also de-risked the increase to the Long Island mining rate of 100-110Mtpa.

Capital requirements of bringing Long Island on are expected to be in the order of $18 million. This is primarily for the expansion of the mining camp and heavy vehicle workshop infrastructure.

The Long Island plan is based on a strip mining approach similar to that used in coal mining to significantly reduce waste mining costs.

It will use short horizontal hauls to backfill the open pit void instead of the conventional longer hauls out of the pit to remote elevated waste dumps.

Should the joint venture give Long Island the green light mining rates will increase slightly through the 2018 calendar year to a maximum mining rate of about 105Mtpa during CY19.

This rate increase will require the introduction of a second 600t face shovel and adding two more Caterpillar 793 haul trucks. The additional equipment is to be supplied by mining contractor Macmahon Holdings.

The Long island plan has three key decision points over the life of mine with eight planned strips.

The first phase of Long Island will consist of strips at Boston Shaker and Havana South extensions.

Surface short tip options will be used through to the second half of CY19. By then the Tropicana pit will be mined out and backfilling of the void can begin.

Independence Group managing director Peter Bradford said the company was getting positive outcomes with the Long Island Study and making good progress in identifying how to unlock further value from the Tropicana mineral resource.

“The proposed mining approach is anticipated to commence in CY19 subject to final approval by the joint venture,” Bradford said.

“Grade streaming through the continuation of the accelerated mine plan will result in elevated mill head grades of up to 2.4 grams per tonne in CY19.

“In parallel to the Long Island Study and the continued implementation of operational excellence initiatives a number of other exciting work programs and studies are continuing to further unlock value.”

Three areas for future value creation are in the processing, underground mining and regional exploration areas.

A pre-feasibility study has been completed on the addition of a second ball mill of about 5 megawatt size, which is expected to lift throughput to 8-8.2Mtpa and deliver recovery improvements of about 89%-92%.

That is expected to cost $20 million.

The study will advance to feasibility and detailed design over the coming months with the aim of making a commitment to proceed in the December quarter.

On the underground front diamond drilling is due to start in the September quarter to test continuation of the Boston Shaker high grade ore shoots beneath the Long Island Study pit design.

Underground mining studies will start in CY18 with the aim of potentially providing supplementary high grade production from 2020.

Regional exploration will focus on the mineralised corridors during 2018 with a focus on identifying open pit resources.

Contractor reaping benefits of a tyre repair facility it has developed at Tropicana. 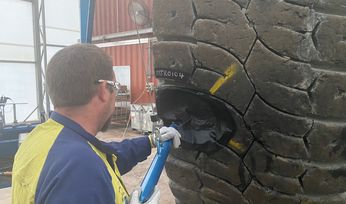 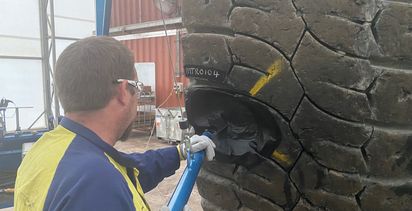