A COMMERCIAL version of a system that could disrupt the way high density polypropylene pipes are installed on mine sites is ready to go to work. 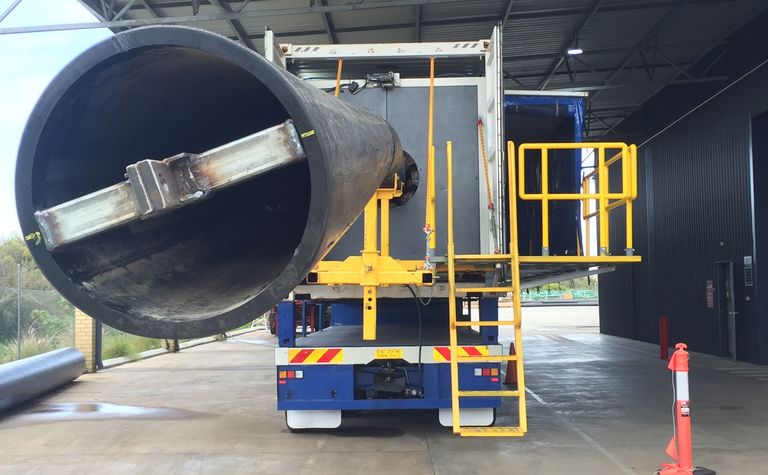 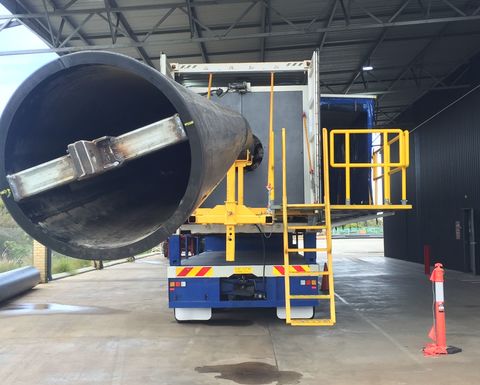 Pipe being produced by the PPS unit.

Polyline Pipe Systems has developed the system, which can turn out HDPE pipe for 315mm in diameter to 630mm with walls of varying thickness.

The company, based in the Perth southern industrial suburb of Jandakot, has the unit fitted onto four trailers for easy mobility.

The idea is the trailers are driven to site, linked together and then pulled along pumping pipe out the back. If need be that pipe can be spooled into a trench.

There will be no need to send the HDPE pipe to site in sections, lay it out where it is needed and weld it.

The problem with those welds is they introduce weak points to the pipeline.

With the PPS approach the pipeline comes out in one piece to the length needed.

The first trailer unit has a generator to produce electricity to heat the resin to make the pipe and then cool the pipe as it comes out.

When Australia's Mining Monthly witnessed the PPS system in operation only one of the cooling units was in operation because it was only turning out a small diameter pipe. Nevertheless, that unit was enough to take the 220C material down to a temperature that was just pleasantly warm to the touch.

That cooling is crucial. Without it the pipe would come out at a temperature where it could collapse under its own weight or be damaged by the clamps pulling it out.

The other three trailers are essentially there to form and handle the pipe.

PPS is using off the shelf HDPE producing technologies and generators. The trick lies in how they are put together to create a pipe factory that moves to where the pipe is needed.

The company is working on converting an excavator base for use as a hauler for the system. Until that is ready a dozer will do.

There are a couple of wheels monitoring how fast the pipe is being produced in the PPS system, which can be relayed to the dozer operator to ensure the "factory" is being pulled along at the right speed.

The system also takes 280 readings per second on the pipe being made to prepare a report for the customer on the quality of the pipe.

The unit AMM saw in operation will likely go through a shipping container full of resin in about one day if it is making a 630mm diameter pipe.

The trailers the system is mounted on have been built in China. Difficulties with the global shipping market led to delays in getting them to Australia.

That meant plans to have the unit ready for use in April could not come to pass.

However, those issues are in the past and the system has been assembled and is ready to go to work.

PPS managing director Ian Dorrington said a number of the mining company representatives who had seen the system wanted to know what PPS' first two jobs were.

So much for the old mining rule of being the first to be second. These days it seems it is first to be third.

Dorrington said that aside, most who had seen the system had been impressed.
While the PPS system is mobile, it seems likely the company will make several of its PPS extruders to cover different mining regions. After all, it is about 1000km from Perth to the iron ore mines in Western Australia's Pilbara so setting one up in the region would make sense.

Two income streams could flow from that.

The first is to go to the customers site and produce pipe to the length the customer needs where it needs it. The other is to just turn out pipe in set lengths for customers to take to site and join up themselves.

An initial public offer is still on the cards, although that may be in 2022.

PPS is already a publicly unlisted company with 956 shareholders.

A purpose-built pipe-production hub could also be developed that recycles old pipe into new pipe. 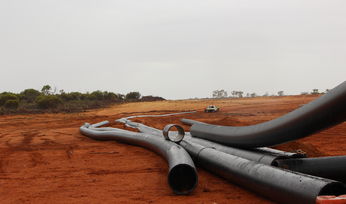