SHE may be older than her longwall counterparts in the rolling hills of southwestern Pennsylvania, and similar in many ways to sister mine Enlow Fork, but Consol Energy's Bailey operation has practice in place for its own strong future with plenty of wisdom on productivity, process and safety to share.

The mine outside the small community of Wind Ridge commenced production in April 1984. About 18 months later in November 1985, the operation pulled coal from its first longwall face.

More than two decades later the mine is still a strong force in the longwall and room and pillar sector with dual panel faces and a staggering 11 entry mains. The Bailey mine certainly teaches others in the mining community about respecting their elders with a budgeted 10.665 million ton production budget for 2008.

As of January, the operation was well on its way to meeting that goal, with 870,000t clean (1,066Mt raw) already on the books before many others realized the year had begun.

Mining at Bailey is done under 400 to 800 feet of overburden, accessed by elevator. Once at the bottom of Crabapple Portal, which opened for use in early 2003, the ride to the 9I or 11H longwall faces takes about 30 minutes by one of the mine's fleet of 75 Brookville, Eimco or Fletcher mantrips that vary in capacity from two to 15 passengers each. The vehicles are powered by diesel, battery and trolley.

One the way, it is clear Bailey is undergoing a big change – a switch over to diesel equipment, according to general manager and superintendent Robert Wise. About 25 pieces are currently active there, primarily personnel carriers and locomotives.

The two longwalls at Bailey work within a cutting height of 84 inches, and the Pittburgh 8 seam height ranges betwen 66 and 72in. Average panels measure a healthy 1,100ft wide and 12,400ft long.

Officials at the mine casually refer to the two panels as "the Joy face" and "the Eickhoff face", as the 9I employs the use of a Joy 7LS shearer while its 11H counterpart runs an Eickhoff SL300. Both have 60in drum diameters and 38in webs with installed power of 4160 volts. Maintenance crews note that the geology at the faces allow for bit changes about every three shifts.

As mining advances at an extraction rate of about 750t clean per pass, 192 DBT 840-ton load yeild PM4-controlled shields move forward in support of the face, each with a working range of 41 to 91in. One pass takes an average 40 minutes, Wise noted, which incorporates manteinance and downtime. The latter is occasional, he added, as the longwall availability rate overall is about 95%.

Other supporting equipment is primarily provided by DBT, including the BSL and crusher. The panels' face conveyors are one-meter DBT units with twin 42mm Thiele Motors Louis Allis chain moving along at 346ft/minute.

Mine management said that like many of its neighbors in northern Appalachia, gas was really not a significant issue at Bailey. "Our ventilating system effectively dilutes and renders harmless all gases," managment said, adding that pre-drainage processes were not necessary either.

Given the operation's rapid retreat of about 75ft daily with an average daily tonnage of about 40,000t, roof control is an issue common to the region that is not shared by Bailey. "We have a defined roof support plan tailored to our mine," said Wise.

As coal is cut from the panels, the output is carried off on main gate conveyors rated for 3,500tph, and portions of the nine miles or so of conveyor in use at Bailey carry coal to the mine's 7,500t bunker with 4,000tph outby belt.

One significant feature of Bailey's beltline: the 10,000tph, 84in main belts inby the bunker. An uncommon choice for underground use, it is more than justified by the generous amount of room reserved for the belt infrastructure as well as the mine's high level of production.

As with many of Bailey's other processes, much of the mine has everyday protocol down to a time-tested science. Longwall moves planned by the operation's longwall production and maintenance coordinators are no exception.

An average switch takes seven days. This includes the placment of 30ft of mesh for recovery bolting and supplemental cable bolting installation at the gates. This is primarily due to the availability of four complete systems the mine owns to keep its two longwalls running smoothly. Only the shields need to be moved during panel changes.

While Bailey's longwalls alone create an impressive vision of the mine's magnitude, there is another side to this production giant – a fleet of seven full-face continuous miners have cut three entry headgates and 11 entry mains for mine development.

Each is equipped with Voist Alpine ABM 14 or Joy 12CM continuous miners, Joy loaders and shuttle cars, Fletcher and Galis bolters and Stamler feeders with seven 10-man crews active on the machines at any given time.

When complete, the mine's typical roadway/pillar dimensions measure 125ft and 60ft entry centers with 275ft crosscut centers in the gates. In the mains they are cut to 80ft by 200ft centers. Roof control is fairly typical, with Bailey employing triple eight-foot Jennmar and Excel bolts with steel straps on 4.5ft centers.

Consol's big sister operation utilizes layered maintenence procedures, with a full Sunday each week devoted to upkeep underground and a master mechanic as part of mine staff.

Once output is at the surface, it is primarily delivered by rail to the company's 25 customers after making its way through the 7,000tph Bailey preparation plant. The plant, which handles an average 80,000 to 85,000t of output daily, employs 29 hourly and 23 salary personnel and utilizes a full wash, wet seperation (heavy media bath, heavy media cyclone, hydro spiral and froth flotation) method for cleaning.

The 490 total crew members at the Bailey mine (126 salary) work three eight-hour shifts to keep the mine running efficiently and effectively to produce 15.5% of parent Consol Energy's total underground production. With more than 310Mt of reserves remaining, management calls the future of this force "excellent" and estimates at least another 26 years of life.

Wise said that the mine's team members were committed to Consol's company-wide safety goal of zero incidents. As of late January, that record was intact, where it held for all of December 2007 as well. 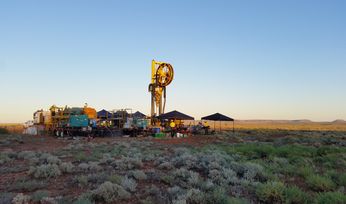