MONGOLIAN coal producer SouthGobi Energy Resources will acquire a 19.9% stake in Aspire Mining, one of the few Australia-listed explorers in the country, for $A20.1 million.

Under the binding agreement, Aspire will issue 105.7 million shares at 19c each to Vancouver-based SouthGobi.

Aspire said this deal was an 8% premium to the seven-day volume-weighted average price of its shares.

The cash will be used to advance exploration at its Ovoot coking coal project through to a feasibility study.

Aspire recently set a maiden resource of 330.7 million tonnes at the project.

About 75% of this resource in the Ovoot Coal Basin was at a depth of less than 250 metres from the surface, while 93.3Mt was measured and 182.4Mt was in the indicated category.

The resource was confirmed by consultancy CSA Global and came from 44 holes drilled for 8364m.

Aspire said more than 90% of coal was within two main seams and one of the holes intersected 42.3m of coal at a depth of 74.8m.

Commercialisation studies are underway while an additional drilling program is planned for 2011.

Aspire acquired the Ovoot and Nuramt coal projects in February and drilling started in the Ovoot project in April.

SouthGobi listed in Hong Kong in February, raising $US432 million, and currently holds cash reserves of around $744 million.

The company plans to develop an underground operation at the Ovoot Tolgoi mine, which began open cut operations in 2008. 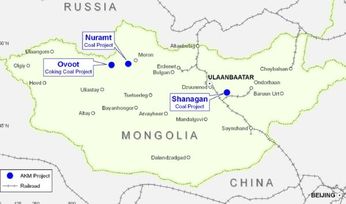 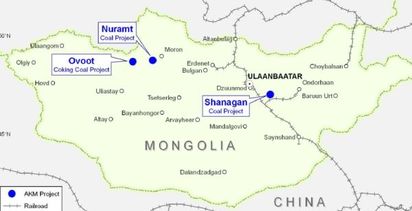