PIKE River Coal CEO Peter Whittall said at the 2006 Underground Coal Operators’ conference in Wollongong that a real-time monitoring system would be established at the mine, but the extent of the monitoring before disaster struck is yet to be determined.

For weeks ILN has sought comment from Whittall and Pike to confirm what gas and ventilation controls were in place at the mine before the first explosion last month.

ILN is yet to find any industry sources who can confirm whether a real-time continuous gas-monitoring system was in place at the mine.

With plenty of Australians assisting the recovery operation, ILN has heard that Whittall had stated he was “getting round” to installing a continuous gas-monitoring system before the first explosion.

During one of his media briefings following the disaster, Whittall revealed there was no tube bundle monitoring system at the mine.

Gas chromatography gear and specialists were flown over from Queensland after the first explosion took place.

Back when he was general manager, Whittall provided gas and ventilation details in his research paper, Pike River Coal – Hydraulic Mine Design on New Zealand’s West Coast.

He noted the Brunner coal seam had a medium to high gas content throughout the resource area, with methane at levels higher than 90%.

“Gas contents are generally low throughout the seam with total in-situ contents of 3 to 6 cubic metres [per tonne] generally,” he said.

“Recent sampling has determined a seam gas content of 7 to 7.5 cubic metres per tonne at the proposed seam entry location. This is at a depth of 85 metres.”

But Whittall also saw the need for real-time gas monitoring several years ago.

“A real-time monitoring system will be established for all gas and ventilation parameters underground,” he said back in 2006.

“The system will report to the mine’s control room and will also be web-interfaced to allow interrogation by mine officials remotely via the internet.

“This will display all details of gas monitoring, underground ventilation and main fans, as well as the mine’s pumping system.”

Whittall has previously told ILN that the gas-monitoring systems at Pike were of the same standard as those used in mines in New South Wales and Queensland.

But other reports based on text messages from Pike deputy Conrad Adams, one of the 29 miners killed, revealed there were problems with gas and the main ventilation fan at the mine.

One of his friends, former Pike worker Brent Forrester, subsequently came forward and discussed gas problems at the mine in a televised interview.

Back in 2006 Whittall envisioned that the main fans would be operating within an envelope between 1 kilopascal and 1.6kPa at air quantities from approximately 135 cubic metres per second to 240cu.m/second.

But Pike was forced to make adjustments to its ventilation model after a rockfall blocked the main ventilation shaft in February 2009, forcing the mine to complete a smaller bypass shaft to restore full ventilation.

Pike slashed its production forecasts two months ago and took measures to increase ventilation and lift the pace of roadway development.

“We have recently completed commissioning the first of our two main underground fans that has increased ventilation by around 30 per cent,” Whittall said at the Pike annual general meeting a few days before the first explosion at the mine.

“This allows us to run the hydro [mining] system as well as three roadway development units, which was not previously possible.”

Process gives a sneak peek at what's happening inside a gold production plant in real time. 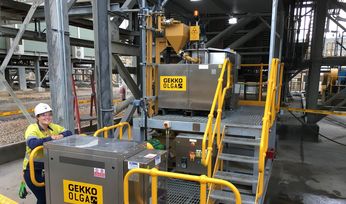 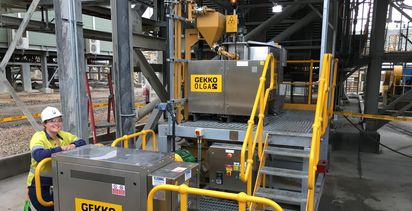