Martin Engineering, Port of Seward team up in growth endeavor

The Port of Seward has completed a conveyor system upgrade for its coal handling operations that has raised throughput by an estimated 20%, allowing Alaska’s largest coal producer to better compete for international customers.

By installing the new EVO Conveyor Load Zone from Martin Engineering, the terminal has increased the average load rate for the entire ship loading process from 700 metric tons per hour to 858t/h.

With throughput increased, ship loading times are being reduced, driving down costs and making the exported coal more affordable to overseas buyers.

“Basically, we should be able to knock one day off our loading time for each ship,” Usibelli Coal Mines business development vice president Steve Denton observed.

In fact, the terminal has progressed from an absolute maximum of 18,000t per day with dry coal and optimal loading conditions to more than 20,000t/d on average – including operations in poor weather and less-than-ideal operating conditions.

“Over the course of a million tons per year, that’s a major saving for our customers, as they’ll be able to enjoy better free-on-board (FOB) prices. We also save on the cost of ship demurrage, which helps pay for the cost of the conveyor investment,” Denton said.

Since 1985, the Port of Seward has shipped over 16Mt of coal, all of it originating at the Usibelli coal mine 400 miles to the north, that currently exports more than 45% of its annual production. UCM and its affiliate Aurora Energy Services (operator of the Seward coal terminal) have no doubt the port plays a key role in their future.

With one of Alaska’s few year-round ice-free harbors, Seward has the ship-loading resources to feed the expanding international export market. It’s also the southern terminus of the state-owned Alaska Railroad, with terminal facilities owned by the railroad and operated by AES.

A major obstacle to expansion was the port facility’s aging infrastructure, which had seen few improvements prior to 1999. Upgrades began that year when Alaska Railroad purchased the terminal, but despite best efforts, by 2008 the facility had become a logistical bottleneck and a source of occasional dust complaints.

One of the issues was the ship loader itself. With a view to expanding Usibelli’s export market share, AES began taking steps to increase throughput at the port facility, but initial efforts to reach 2,000t/h proved almost entirely unsuccessful.

“Working with what we had, we could only reach 600 to 700 metric tons per hour,” AES terminal general foreman Vic Stoltz noted.

“We made some improvements and got up to a steady run rate of 750 metric tons per hour, but there were still some major issues with coal backing up in the chute.”

The company reports that the recent chute upgrades have virtually eliminated spillage and dust issues.

The need to increase throughput at Seward while protecting the region’s air quality and natural splendor led AES to investigate new conveyor technology from Martin Engineering. After testing the Usibelli coal to determine its flow properties, Martin used Discrete Element Method modeling to design a chute capable of properly handling the coal.

“When we got back the computer models, we saw that we were able to pass 1500 metric tons per hour and still control dust, all while keeping within our capital budget,” Stoltz said. “When our management realized that we could increase throughput, increase safety and reduce our environmental impact all at once, they were completely in favor of implementing the suggested upgrades.”

The new transfer point makes use of Martin Engineering’s Inertial Flow Transfer Technology, with the entire chute custom-engineered and modeled in 3D to provide the optimum design for the material and flow rate needed.

The “hood” controls the flow of material from the discharging conveyor, maintaining a coherent material stream and minimizing induced air. A smooth loading chute, or “spoon”, places the stream of coal onto the ship loader’s boom conveyor at the proper speed and angle with minimal impact, reducing material degradation, belt abrasion and the expulsion of airborne dust.

AES also mounted EVO External Wearliner on the load zone’s existing skirtboard for improved sealing. Because it is attached from the outside, it is easier to install, inspect and adjust than conventional seals, without requiring confined space entry.

The first thing the AES crew noticed was an improved material load rate. During the initial shakedown run, operators noted the conveyor’s weigh scale pegged at 100%, but the belt didn’t shut down.

The old system peaked at 1000t/h (including ship and hatch moves), but with new components in place, the system now hits peaks of 1500t/h.

“We don’t have slowdowns due to the chute clogging up, which previously was a constant battle,” Stoltz added.

“The clean-up time has been reduced by more than 40 man-hours per shipload,” he noted.

“The longer it takes to load a ship, the greater the chances of creating dust.”

Denton summarized the experience: “The work that Martin Engineering did eliminated a chronic bottleneck for us. There were many things we were doing to increase our throughput, but it was impossible to realize the full benefits until we cleaned up our loading operation with the installation of the new EVO hood and spoon transfer chute.”

Stoltz added: “With these upgrades, we’re earning our money back every time we start it up.”

The CS2 helps reduce the cost of ownership for mining, processing and quarrying. 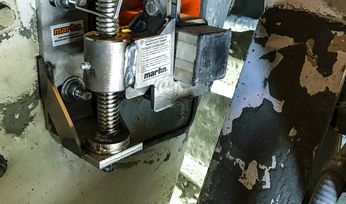 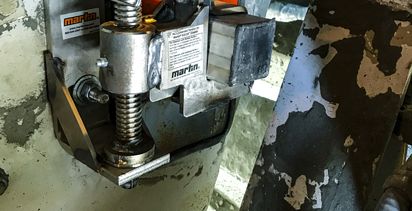