ONE of the newest underground mines in the US, Remington Coal’s Winchester mine – which in July became a holding of Patriot Coal following its takeover of the mine’s owner, Magnum Coal – has the ideas, commitment and technology to carry it forward for years to come.

Sitting amid the foothills of the Southern Appalachian mountains, the mine is part of a collection of operations in rural Kanawha County, West Virginia. A clean supply yard and transport vehicles that still maintain a shine are evidence that Winchester began cutting its first coal in December 2007, after about eight months of development work.

The mine sits beneath about 600-700 feet of cover with estimated recoverable reserves of 22 million raw tons – a healthy outlook even before it is considered that there’s more room to grow, according to general superintendent Byrd Hairston. He estimates that the mine’s 80 employees will have at least the next 10-12 years in the 50-inch Hernshaw seam before the neighboring reserves are considered and exploratory drilling performed.

After a 10-minute ride to the active sections aboard one of Winchester’s fleet of mantrips by Brookville, Damascus and Johnson Industries, miners step out into a standing-room cutting height of 65in. The room and pillar mine’s two supersections pull coal with four Joy 14CM15 continuous miners, which spill onto Phillips Machine shuttle cars for transport to the Cougar Mine Supply section belt feeder.

Each continuous miner unit is budgeted for 1600ft daily. This is 200ft of advancement each of the four CMs over two of the mine’s three shifts (maintenance is performed during the third shift daily and every other Saturday). To date there have been no issues with the mine’s immediate roof of sandy shale, but to ensure secure support the mine has a solid plan of bolting in a 4ft by 5ft pattern on 4ft spacing using Fletcher roof bolters to install the fully grouted 4ft and 6ft roof bolts. Winchester’s main panels are driven on 70ft by 70ft center pillars with room pillar dimensions of 55ft by 55ft.

Gas is also not an issue. “No methane gas has been detected,” according to safety director Robert Hill, and so far the common regional problem of water has eluded them. For ventilation, the operation designed a split system for the face and a blowing fan system overall.

Once coal is pulled from the two active sections it is carried using the fleet of face equipment, which includes battery scoops by Southern Mine Service, Continental Crushing & Conveying belt systems installed with Fenner Dunlop belting featuring 2000 tons per hour capacity.

Section belting is 48in wide while the main portal belt measures 60in. According to Hill, there are no issues with belt systems or obstacles, and work is ongoing for a new overland conveyor system that will carry the output to Catenary Coal’s Toms Fork preparation facility.

One benefit to the mine’s output is its flexibility, noted Hairston, as it can be used as either a met or a steam product. That has made the tonnage leaving the preparation plant by train and barge to its customers very attractive.

Winchester’s management has taken cutting-edge available technology and put it to work for better production and safety underground. The centerpiece of the control room at the portal office is a Pyott-Boone AMS monitoring system that keeps running tabs on belts, fans bearings, belt drives, motors and more.

The Work Log software program is used to track components as well as equipment repair costs. Careful monitoring of the mine’s everyday performance and maintenance needs keep this new mine’s equipment availability up to an average 85%.

Just this year, the mine installed something that few other operations in the county have, at least yet – a wireless communications and tracking system, this one by Active Control Technologies.

While still pending federal approvals, the state-approved ActiveMine system saw its second US installation at the Winchester mine in February this year. While it is being utilized primarily for communication monitoring, Hill said the decision to purchase it was made because of its capabilities into the future.

The Wi-Fi features of the wireless system were particularly attractive to the operator because almost every facet of the mine’s needs could be satisfied more efficiently, including maintenance and monitoring, laptop use underground, camera installation beneath the surface and more. “It has future advantages,” he said.

The dust has barely settled at Winchester as it approaches its first year anniversary, but already crews are making their mark in production and safety at the room and pillar operation. The mine is budgeted for 650,000 clean tons this year, and as of July 31 that year-to-date total was 108,000t.

Hill admits that one issue the mine is suffering is a significant problem for all operations in the region: a shortage of skilled laborers, particularly those with experience. Workers are moving from mine to mine in the area, enticed by the promise of more money, better benefits and work hours suited to their needs.

However, Winchester’s biggest advantages are its ideal conditions and security – as a brand new operation, it still has the best years ahead of it, management notes. Right now the mesh of staff is good, with a mixture of younger workers and older veterans. Hill noted a positive trend with the experienced workers who are taking newer recruits under their wing to train and encourage safe practices.

The mine has also not suffered a lost-time accident since coming online nearly a year ago, noted Hill, something that makes management very happy with the crew’s commitment to safety. “The mine philosophy is not to depend on luck for our safety performance – safety is an effort that is not to be taken lightly.”

Only company to make the cut on the Parity.org list. 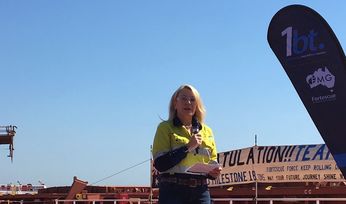 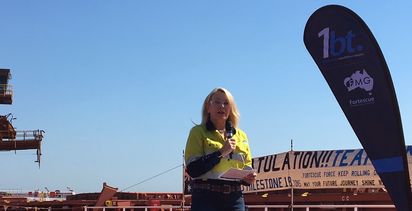 Ramp up at Maules Creek as Whitehaven prepares for Winchester South