A GRIFFIN coal executive claims that the Collie-based operation is faring better since the December quarter where it lost more than $A3.6 million per week.

Recent quarterly results by Griffin’s Indian conglomerate parent Lanco Infratech revealed that the Griffin thermal coal business in Western Australia lost more than $44.5 million in the December quarter – with Carna Civil and Mining terminating the mine operation contract towards the end of this cash-poor period.

However, Griffin general manager of project development and corporate relations David Trench told The West Australian the company was since faring much better with Lanco paying off longstanding Griffin debts after selling a power station in India.

He said mine production levels had rebounded after Carna's exit, with coal deliveries resuming to major customers Worsley and Cockburn Cement.

Griffin’s next challenge is to settle a new enterprise agreement with a workforce that is prepared to strike over planned cuts to wages and big changes to work rosters.

"We're not trying to pick a fight," Trench told the newspaper. "The issue is if we don't do anything then it goes pear-shaped."

The worker was fatally injured while attempting to access the shovel's electrical stop switch. 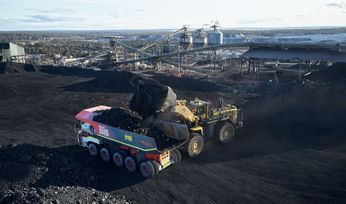