ACARP has completed an investigation to establish whether diffraction analysis would allow identification of the location of small faults within 2D and 3D survey data.

The study involved computer generated synthetic seismic data and actual survey data from high resolution seismic surveys from Australian coal mines. It was anticipated that new processing techniques might need to be developed.

Faults cause breaks in continuity of seismic horizons and at these discontinuities, diffraction patterns in seismic waves are generated.

This is a well understood phenomenon but modern seismic acquisition and processing techniques are mainly directed towards providing high resolution images of the reflecting layers in the subsurface. Diffraction behaviour is largely ignored.

The potential for a diffraction analysis to reveal the locations of small faults and dykes that can impact on underground coal mine operations is therefore a fertile area for investigation.

Pre&#8208;stack depth migration was shown to collapse diffractions and make the detection of small faults difficult. However, in conventional post stacked sections, diffractions are preserved and can be extracted by utilising relatively straightforward procedures aimed at removing reflection events from coal seams with relatively shallow dips.

By comparison with stacked sections produced after the reflection data were removed from the shot records, it was found that normal moveout corrections and stacking do not adversely affect the diffraction behaviour.

BMX Fragmenter generates millions of 3D data points and reviews up to 200 photos per hour. 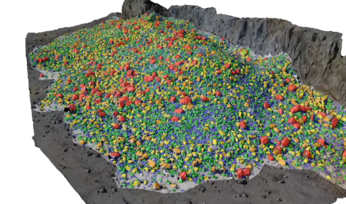 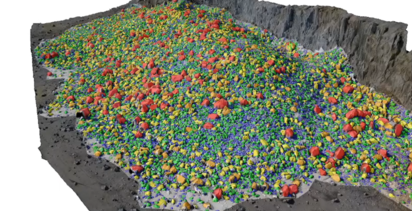