For site testing the system was packed in an impact box with charger, operation manual, risk assessment and a feedback form to be completed by the person operating the device.

To date there is positive feedback from the operators. Future development will address ergonomic aspects, portability and reducing the manufacturing costs to make PAT commercially attractive, according to ACARP.

ACARP Project C21009 report has been developed by the Engineering Department of Custom Fluidpower to present the stages or product development materialized in producing four working prototypes that have been used for testing on site and for evaluation of the intrinsically safe certification.

Since 2009, ACARP had an important contribution to sustain the project financially offering guidance for each stage of the development represented by Bevan Kathage Research Coordinator at ACARP Underground Queensland. Also of a great value was the contribution of Industry Monitors Barry Moore from Centennial Coal and Keith Cardew from Peabody Energy.

Project C21009 is part of the Occupational Health and Safety group of projects and the primary objective was to address the risk of injury when servicing hoses in an underground environment.

Following a contractor fatality in July 2006, ACARP looked to help develop a portable device that can test the pressure in hoses before they are disconnected.

The exact operation of a portable device that can detect pressure in hydraulic hose by having no contact with the oil was not known because no device was available on the market.

Following a meeting between Bevan Kathage Research Coordinator from ACARP and Neill Martin - Business Development Manager at Custom Fluidpower a proposal was made to investigate ways that a concept will be researched. Liviu Schintee - Engineer Custom Fluidpower proposed a device that will deform the hose and measure the resistance to deformation.

The information is compared with known values and displayed as High Pressure or Low Pressure to the operator. A press with calibrated instruments was used at first to prove the concept. Then the decision was made to make a portable device later called PAT - Pressure Alert Tester.

First portable prototype was developed in 2010 and Custom Fluidpower applied for a patent. In an effort to develop one device capable of testing any hose between nominal size ¼ inch and 2 inch.

Different prototypes have been developed to test the operability, electronic components, mechanical reliability and battery life.

The hose pack return hose was damaged by a piece of coal as the roof bolter head extended. 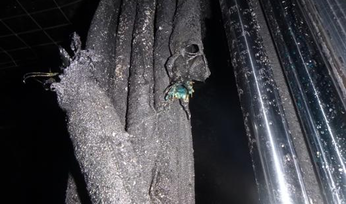 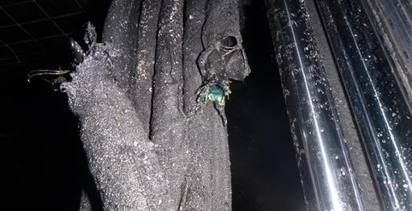