Drilling in the right direction

Newstan, which was placed on care and maintenance in May 2009, has continued to operate the Newstan Colliery Surface Facilities Area for the handling and processing of coal from other Centennial operations.

Development work is about to recommence at Newstan.

There is a dedicated haul road to Eraring Power Station and the Cooranbong Coal Handling Facility and it is just 25 kilometres to the Port of Newcastle, both for exports and a bi-directional rail loop that enables loading and dispatch of trains south to Port Kembla Coal Terminal.

Mastermyne had an existing contractual relationship with the mine and was the logical candidate to take on the exploratory directional drilling for the mine at its southwest corner, Mastermyne NSW state operations manager Col McIntosh said.

“It came out of the negotiations for a roadway development contract,” he said.

“They had a requirement and we were already there doing the conveyor job. We were negotiating a development contract, and [drilling] was a service we could provide with our new equipment. We have a good relationship with Centennial at Newstan and it made good commercial sense for us to do this work.”

Newstan mine manager Mick Cairney told Australian Longwall Magazine the mine was willing to give newcomers Mastermyne a go at the long hole drilling at the mine as it was as a specialist area.

“We don’t have long hole drilling equipment...so we secured Mastermyne for the job,” he said.

“It’s a new rig. While new to the game I’m happy with their approach to the job and the results that we’re getting.

“It has delivered us some really good metres. There were a few issues with a bit of the geology but the boys negotiated this pretty well. The rig and the team has performed well.”

The company had done statutory coverage and trades work at Centennial’s nearby Mandalong mine as well as belt installs and outbye work at Newstan so its reputation with Centennial was well established.

“Our team at Newstan has done substantial remediation work to the underground infrastructure to prepare the colliery for production,” McIntosh said.

“We’ve got a simple operating philosophy. We provide a quality service to our clients, focused on being self-sufficient and removing headaches for our clients, not creating them. Through this process we develop long-term relationships through partnerships with our clients.

“How we deal commercially is the same way. The whole black-and-white thing [company culture] is still the underlying theme with Mastermyne.”

“Newstan has a very good culture – the way people interact. Mine manager Mick Cairney wants a very professional culture and we’re very confident we will help him achieve it.”

Mastermyne directional drill manager Jeff O’Keeffe said drilling equipment and personnel were mobilised from the company’s Mackay, Queensland operation, while offsiders from NSW were trained on the job.

“It was quite a seamless transition to bring everything down from Queensland,” he said.

“We formed a good working relationship with the Centennial engineering team in working through the process to introduce the equipment to site.”

Mastermyne took delivery of the LMC90 rig in October 2010.

“Like any new equipment, we had to change a few things around to suit our specific needs,” O’Keeffe said.

“But at the end of the day we were very well supported by the OEM who is very good in what they do – they were very helpful around the compliance issues.”

The drill rig has a design hole length of 1500m – previously 1200m was the maximum available. The only other drill rig of this capacity is based in the Illawarra and owned and operated by a mining major.

Mastermyne has no plans to exceed the current 1200m hole length, however this increase in capacity provides redundancy in the event of arduous conditions, where increased thrust and pull is required to recover equipment.

Having this additional thrust and pullback torque will increase productivity and allow consistent penetration rates at full distance.

Reduced setup times are also a feature of the new rig, thanks to the onboard stingers and the track-mounted power pack/feed frame.

“Depending on the situation the rig is capable of drilling out to 1500m,” O’Keeffe said.

“For our rig 1200m is a good comfortable and workable reach, compared to many of the current rigs where 1200m is working on the maximum limits. Once you get out of those depths and you get it into trouble you’re really at a loss for any redundant capacity to retrieve the drill string.”

McIntosh said: “A lot of people are constrained by development, and with pit planning getting out that extra bit of distance could buy a lot of time. Drilling off to get approvals to go off-mains or prove where there is a fault – that extra 300 m capacity could buy significant development time.”

Mastermyne wants to develop and grow an inseam directional drilling business with dedicated experienced people, cutting-edge equipment and a management system that is robust and flexible.

It aims to deliver and sustain a reputable drilling alternative for the underground coal community.

To prove its commitment to its customers, the company has made a significant investment in developing the rig and offering it with value-added extras, McIntosh said.

“It is a brand new rig with the right documentation and right training in place before it went out,” he said.

“We consider this a substantial investment and have maintained our commitment of owning and supplying good quality equipment, so you won’t find any second hand components in our whole drilling spread. We’ve done this to let our clients know that we are serious about this work.”

O’Keeffe said the company had invested in a full set of recovery gear, which was like an insurance policy for the unit that reassured the customer and demonstrated a commitment to providing a quality service with the right backup.

Mastermyne has also differentiated itself in the directional drilling services market by working to the RII nationally accredited training program developed and registered (Certificate 2 and 3 in Underground Coal Drilling Operations) for its operators.

Certificate 2 is for the offsiders, certificate 3 is for the driller, a step process to be classified as drillers. Certificate 4 is built around supervision, flight plans and financials.

“It’s not just swinging a few levers and pushing a bit of steel in the ground, it’s understanding why you are drilling in a certain way,” O’Keeffe said.

From the safety aspect, the information that comes back from the driller at the face is critical for the client, said McIntosh.

“The operator’s competence has a direct impact,” he said.

McIntosh believes horizontal drilling is a niche market and that the demand for drilling for gas – especially in NSW’s south coast mines – will be a constant.

“Mastermyne is always looking to broaden the scope of services which it provides, with the recent acquisition of a ventilation company a recent example,” he said.

“Directional drilling was the only mainstream service we were not providing.

“Many of the bigger mine operators are trending towards umbrella contracts and wanting more services from the one contractor so it was a no-brainer.”

While some of the more gassy mines carry out their own gas drainage, in the future it may prove commercially advantageous to contract out the process to companies like Mastermyne, McIntosh said.

“The NSW south coast mines use small equipment and a lot of it has aged so we consider there will be many more opportunities for our services,” he said.

“If it is a cost-per-metre service; the mine owners have a known cost base, which simplifies their budgeting process as well as minimising the potential for overruns.

“We’ve set up this business as a standalone operation. We’ve got all our own recovery gear. Everything is quick and easy to set up and we carry all the recommended OEM spares for the rig. We carry two of everything, all except the guidance tool. I’d like to think it’s a quality product.

“We’ve worked a lot with AMT’s guidance technology and what you get out of that has a lot to do with your success.”

O’Keeffe agrees: “It is a robust bit of kit and to date we have had no issues with it.”

McIntosh is encouraged by the smoothness of the start-up of the rig at Newstan and the cooperation of all parties in commissioning it and keeping it running at optimum capacity. The experience leaves him confident about the future take-up of directional contract drilling in NSW and Queensland.

“We’re bringing something new to the table,” he said. 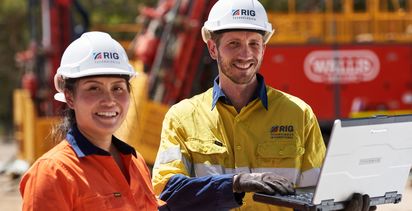