THE anticipated sale of the Springsure Creek longwall project this year will help resolve infrastructure uncertainties for Acacia Coal’s nearby Comet Ridge project in the southern Bowen Basin.

A 20-year mining lease is expected to take about a year to be approved, although project development timeframes are uncertain at this stage given that estimated costs of production are around $US120 a tonne – well below existing coking coal prices as the downturn continues.

The collapse of Bandanna Energy served up another challenge to the Comet Ridge project.

Acacia managing director Gavin May told ICN he was expecting a sale of the Springsure Creek longwall project this year and was hoping it would take place in the September quarter.

This longwall project was also slated to use the Wiggins Island Coal Export Terminal for export, with WICET liabilities and a delayed approval process forcing Bandanna into voluntary administration last year.

Macquarie Capital, who were appointed by Bandanna’s administrator PPB, aims to complete a sales process in September ahead of a creditor’s meeting in October.

What will help motivate a sale is that WICET is expected to start shipping at the end of April with take-or-pay obligations anticipated in the following month.

“In some respects it’s a great asset because you could get it cheap, they’ve only got to finish off the mining lease approval process and they’ve got an approved project that is potentially unencumbered,” May said of Springsure Creek.

The Comet Ridge project is targeting up to 350,000 tonnes per annum of coking and thermal coal production under the MLA at a potential ratio of 80% coking coal versus 20% thermal. Development is expected to require a construction workforce of just 50 people.

Bandanna was targeting an initial 5.5 million tonnes per annum of capacity from its Springsure Creek project with first longwall coal expected in the second half of 2016.

Bandanna also flagged the option of doubling output and first output from a proposed second longwall was expected in 2020. 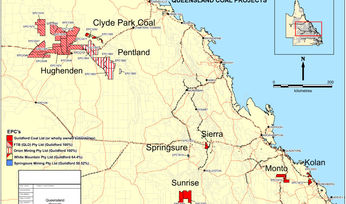 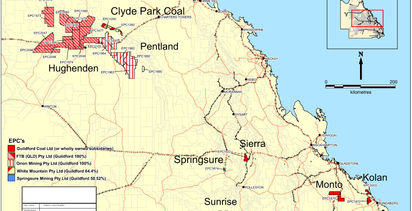