Anglo's Grosvenor tunnels for the future

Anglo American’s decision to use a tunnel boring machine for the drift of its $1.95 billion Grosvenor project in Queensland’s Bowen Basin has paid off for the company. 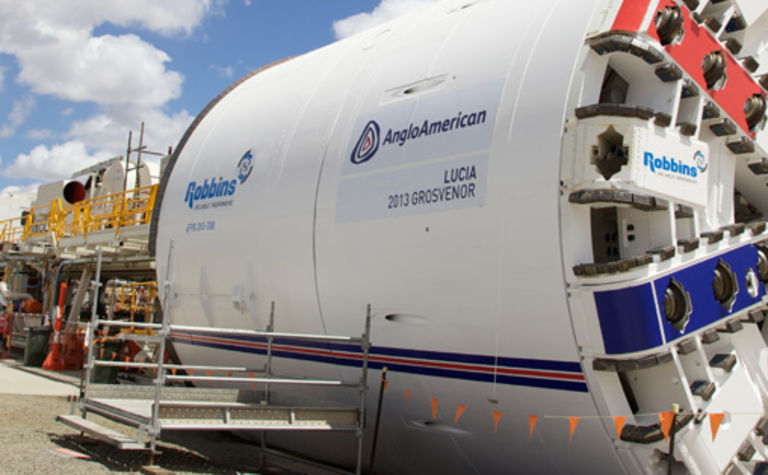 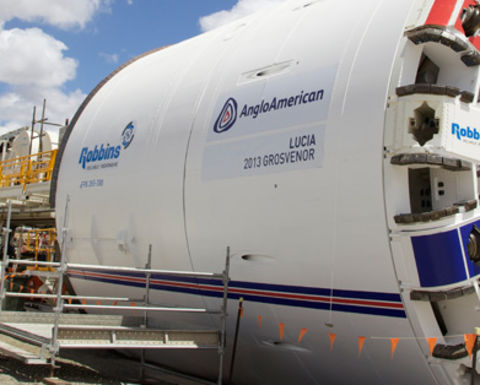 The mine is now one of the few new longwall projects to come on stream in the country.

The company is now using its knowledge of the area’s geology and technical expertise and innovation honed at the nearby Moranbah North mine to prepare to go into full production next year.

Grosvenor is a greenfield underground coal project in Moranbah, Central Queensland, which will produce about 5 million tonnes of coking coal each year for export using the conventional longwall mining method.

Coal will be transported via an overland conveyor and processed at the Moranbah North mine. The project has created more than 750 construction and 350 operational jobs.

Since construction began in 2012, extensive civil and earthmoving works have been completed with almost 2.5 million cubic metres of spoil moved to prepare the above ground site, and the construction of the 7km overland conveyor which will transport Grosvenor coal to Moranbah North once operational.

Anglo’s head of underground operations Glen Britton – who has been instrumental in turning around the fortunes of Anglo’s Moranbah North mine – is well aware of the operational significance of the Grosvenor project for the Australian coal mining industry.

“I think Grosvenor is the future of underground mining particularly in Australia,” Britton said.

“A lot of effort has been done to make sure that everything is fit for purpose and it’s industry leading.

“To be part of that from day one can only be good.

“For an old hand such as myself that has a few years under my belt, it’s also very exciting because you’ve seen where the industry has come from and potentially where it could go.

“Moranbah North is showing that we can mine it and mine efficiently and to be the best in the world.”

Britton said the company knew the mining conditions at Grosvenor because of its experience at the nearby Moranbah North mine.

Grosvenor, which is now Anglo’s flagship metallurgical coal operation, hit a major milestone earlier this year with the first coal sale loaded on the MV Spring Aeolian bound for India.

Just over 19,000 tonnes of Grosvenor’s coal product was shipped after being transported from the site in Moranbah to Dalrymple Bay Coal Terminal near Mackay, a 195km journey.

The Grosvenor product was part of about 78,000t of Moranbah North hard coking coal loaded on-board the MV Spring Aeolian which completed the 22 day voyage to India.

This coal sale was a cause for celebration and relief for the Grosvenor team which had worked tirelessly to establish the underground roadways, conveyors and mining panels in preparation for the longwall mining machinery installation.

The tunnel boring machine completed a second 1km long drift for people and equipment for the Grosvenor underground mine with the tunnelling breakthrough came 29 days ahead of schedule.

Effectively the tunnel boring machine (TBM) excavated the first 750m conveyor drift for the mine in six months.

Just after midnight on 10 February, 160m below the ground, the Grosvenor team in Australia saw the entrance of “Lucia” – the nickname for the TBM – as she broke through to complete the second drift for people and equipment.

The construction timeframe was shortened by using the knowledge gained from work on the conveyor drift, which was tunnelled last year.

Following the tunnel boring machine breakthrough in February this year, the longwall is on track to be in full mining production in 2016.

“Our $1.95 billion investment in Grosvenor is the cornerstone of our asset portfolio and growth, and seeing the first commercial benefits from our investment is a very important achievement,” he said.

The tunnel boring effort was a highly co-ordinated project between Anglo employees and contractors.

Grosvenor underground construction manager Adam Foulstone said the team collaborated effectively with the contractors and the key to the outstanding increase in productivity came from lessons learned during the conveyor drift construction.

“From an industry perspective we have achieved the highest levels of collaboration and production through tunnelling, which provided a safer environment than conventional tunnelling methods,” he said.

“On our best production day we installed 18 concrete rings to support the tunnel, so about 25 metres, and our best week was 78 rings, or 110m.”

Redpath Mining had the three year $264.5 million contract to construct the drift using the TBM.

The scope of works was to construct temporary office and workshop facilities, install two portal arches, backfill boxcuts and infrastructure, excavate by EPBM method 967m of 1:6 gradient conveyor drift and 1258m of 1:8 gradient transport drift, development of 2520m of pit bottom area roadways and development of 10,550m of the first longwall tailgate.

Engineering, architecture, environmental and construction services company GHD had an active role to play in the deployment of the TBM – a first for the Queensland coal mining industry.

This is the first time an Earth Pressure Balance (EPB) TBM has been used in a coal mining environment in Queensland and one of a few times a TBM has been used in the Australian mining industry. The new method was designed to help Anglo American improve safety, achieve higher quality drifts and expedite project development.

A production-halting roof collapse at the conveyor drift Anglo’s Moranbah North mine in 2011 was seen as one of the reasons it embraced the civil construction technology – with TBM-driven drifts expected to last five times longer than those are conventionally driven in Australian coal mines.

GHD tunnel manager and principal engineer Brendan Henry said: “One of the advantages of the EPB TBM is its ability to excavate through weak, water- and gas-bearing ground without exposing workers to these hazards.

“The TBM reached daily advance rates of 18 tunnel rings, or 25m of fully lined tunnel, driving through minor coal seams charged with methane of pressures above 1.5 Bar. The front section of the TBM was designed as explosion proof to operate in these conditions.”

Anglo American Coal CEO Seamus French said the Grosvenor team’s effort in driving the TBM through the second tunnel significantly ahead of schedule was outstanding.

“This great result is down to the outstanding commitment of the team who came to grips with the new tunnel boring technology last year and applied our operating and engineering experience from underground mining to lift the TBM performance over the last 12 months,” he said.

“The use of this technology is a first not just for coal mining in Anglo American but for the Australian coal mining industry and the team can rightly feel proud that they are the pioneers of this new technology in coal.

“The team will keep building on the valuable lessons learned as they progress to the next project milestones including extraction of the TBM and commissioning of the longwall at the end of 2016.”

GHD’s tunnel team in Brisbane has been providing tunnelling design and construction phase services for the project since mid-2012 and will continue with site surveillance work throughout the remainder of 2015.

“The transition from the TBM tunnels into the underground mine workings was designed by GHD utilising a combination of standard coal roof support techniques and 3D analysis due to the large spans and high walls required.

“This is a very exciting project for our team.

“We are taking design and construction experience from large civil engineering projects into the mining industry, and adapting our skill set to the design of underground coal workings.”

Once extracted from the drift, the TBM will go into storage for future projects.

The investment in the Grosvenor project comes at a time of historically low coal prices and growing unemployment in the coal mining industry even in its heart land of the Bowen Basin.

The Grosvenor project, which is 100% owned by Anglo American, forms a major part of the group’s strategy to triple metallurgical coal production by 2020.

In its latest annual report Anglo noted that import demand from China has stalled on the back of slowing steel output growth and increased domestic production.

“At the same time, a depreciating Australian dollar, the ramp up of new projects and a productivity focus at existing operations supported overall year-on-year hard coking coal supply growth from Australia,” the company said.

“These largely offset the impact of announced capacity closures there and elsewhere.”

French said that establishing the Grosvenor project demonstrates Anglo’s commitment to Queensland and focus on growing its metallurgical coal business in Queensland.

“The project involves developing a greenfield underground coal mine, producing up to 7 million tonnes per annum of run-of-mine coal, which would be processed to produce about 5Mtpa of coking coal for export,” he said.

“Grosvenor will use the longwall mining method to mine coal and will have an anticipated mine life in excess of 30 years.

“It is our objective to develop a high-quality operation adjacent to our existing Moranbah North facility that will offer benefits to the community, the state and the people we employ, while at the same time enabling Anglo to continue to provide our customers with the high-quality metallurgical coal this region is renowned for.”

The pressure is now on Grosvenor to perform for Anglo because the company has announced that it had concluded a review of its Australian coal portfolio and would be selling its ownership interests in two open cut coal operations, its 51% stake in Dawson mine near Moura and 70% stake in Foxleigh mine near Middlemount, both in Queensland’s Bowen Basin.

The sale of these two assets is in addition to the already announced sales of Callide mine in Queensland and Dartbrook mine in New South Wales, bringing the total sale portfolio to an annual 12.2Mt of export production and 8.4Mt of domestic production, and a combined resource base of over two billion tonnes.

French said that the proceeds from the sales of these assets would be redeployed into strategic focus areas for the business and would contribute to achieving the Anglo American group’s long term net debt target.

“While we are exploring a sale, we will be disciplined in our approach and if offers we receive are below what we consider fair value, we will not sell these assets; these are good assets,” he said.

“In the meantime, it will be business as usual for the operations. We will work through the sales process with the utmost respect for our workforce and will work with them to maintain our safety and productivity focus for the foreseeable future. Beyond the divestment program, Anglo American is focused on sustaining and maintaining our current priority assets and our long-term growth portfolio in Australia.”

The next milestone for the Grosvenor team is the commissioning and installation of the longwall system underground.

This will involve a number of stages over six months including a surface build of the equipment, appropriate recruitment and training for operators, an underground commissioning phase and performance testing prior to operation.

“Anglo American is fully committed to our world-class $1.95 billion Grosvenor project in Moranbah which is on track to longwall production commencing in late 2016, our ongoing operations at Moranbah North mine and the further development of the Capcoal complex in Middlemount,” French said.

The 400 workers employed by labour hire group One Key at the Grosvenor received extra cash. 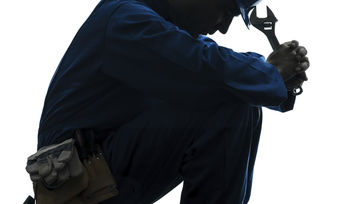 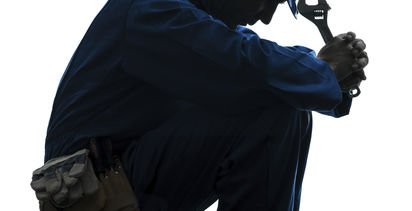