The sounds of silence

I RECENTLY had an interesting Twitter exchange with Drew Hutton, president of the Lock the Gate Alliance, who insisted that institutional investors in coal seam gas companies were talking to him directly about the social risk inherent in CSG stocks. 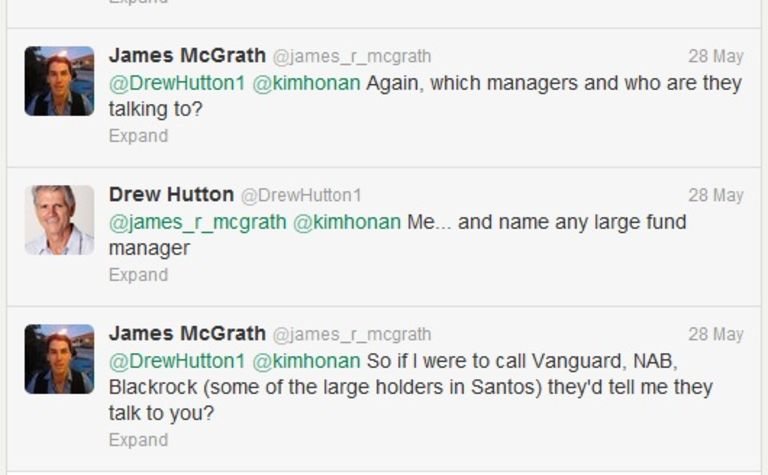 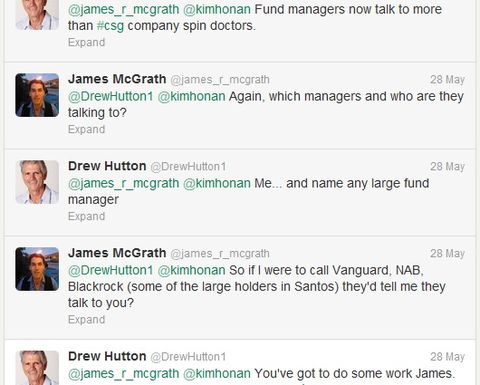 He said investors were “getting nervous” about CSG companies, companies that Lock the Gate was railing against.

You can have a look at the exchange below:

In light of the exchange, I decided to call NAB, Blackrock and Vanguard to see if anybody was talking to Hutton or the alliance about the risk of ongoing protests stalling upstream work.

None of them would comment directly to the question on the record.

Only Vanguard provided an official response to the question:

“Vanguard is an index manager, which means we hold all the investments in the relevant index that the fund is targeting. The objective is to provide investors with the ability to buy the "whole market" as measured by market capitalisation at very attractive low costs,” head of market strategy and communications Mike Bowerman said in an emailed statement.

“So there is a fundamental difference between what we do and other active institutional investors – i.e. our job is not to take a view on whether an individual is a good buy or not, but rather manage the portfolio as tightly as possible to the index.

The relative silence from the three largest holders of both Santos and Origin could mean anything.

It could mean that they were talking with Hutton and afraid to release details of those discussions to journalists asking pesky questions, fearing a drop in the value of their investment if such information was made public.

Or it could mean that they were dumbfounded by the question and nobody knew who Drew Hutton was.

One of the three told EnergyNews that it was a matter of procedure to not comment on private discussions.

Since getting our answers (or non-answers) back from the three investors, EnergyNews has made numerous attempts to get in touch with Hutton (off the public glare of the Twitter-verse) to see whether he would put a name on the public record.

Whether or not Hutton was using Twitter to launch unverified claims or whether he was simply incredibly busy is not known.

Of course, the episode dove-tails quite nicely with an idea that is getting a bit of airtime at the moment.

That idea is that green groups are pressuring shareholders and large funds with holdings in carbon-intensive industries – such as coal, gas, or oil – to simply put their money elsewhere and stop the cash flowing in.

Of course, EnergyNews can made the claim that we called it early in light of the Whitehaven Coal hoax, but this year has seen a marked rise in green activists meeting those with the green.

The Australian Greens in particular have launched a plan to pressure Australia’s Future Fund, a fund that was essentially created to build a pool of wealth the government could draw on for unfunded superannuation liabilities among other things.

It was seen as a great triumph of social advocacy over bottom line returns when in February, the Future Fund decided that it would have no part in funding companies responsible for manufacturing and selling cigarettes.

The Greens are hoping for a similar outcome with tobacco replaced with emissions from gas and coal, with the fund ideally switching its investment focus to squeaky-clean renewables companies.

According to its last public disclosure, the Future Fund holds just over $9.8 billion in Australian equities. Of that, about 9% is held in energy stocks.

Its top 100 equities list has Santos, ExxonMobil and Origin Energy on it, with those three companies equating to roughly 0.3% of the total future fund with the total market value of those holdings about $224.8 million.

While the Fund has certainly heard the call from the Greens, it reportedly has no plans to divest its holdings in gas or coal companies any time soon.

The Fund itself does not make the call on any particular security, but instead uses outside fund managers to select the equities for them, with the Fund given a mandate of meeting a CPI+ 4.5% to 5.5% return per annum target.

For the record, based purely on share performance, Santos has gained about 5%, Origin lost 1% and ExxonMobil gained about 11% for the year.

Activist Bill McKibben has recently come to our shores to urge anybody who would listen that investors were on a hiding to nothing by investing in fossil fuels.

His “do the maths” presentation was given air, largely by the ABC, who booked him as a guest on Q&A, Lateline, Radio National as well as being invited to pen an opinion piece for The Drum and address the National Press Club.

The main gist of his speech was that we only had so much burnable carbon dioxide, about 500 gigatonnes, we could use before we passed the mark to limit climate change to 2%.

Therefore, if world governments started to take climate change seriously, investors in fossil fuel companies would find themselves in an overinflated investment subject to pop.

“Either the bubble pops, or we pop,” he said.

Indeed, he cited research by CitiGroup and HSBC that noted if government were to get serious on climate change, then the share value in fossil fuel companies would be cut in half.

Even a couple of years ago, his thoughts would not have been given widespread attention. However, with the renewed focus on targeting investors his line of thinking was given oxygen.

He reportedly met with superannuation funds while in the country, with McKibben reporting that the issue was on their minds.

What is not known is whether the heads of those superannuation funds were genuinely engaged with what McKibben had to say, or were simply nodding politely while he droned on.

It is also not known whether McKibben touched on gas, or simply focused on Australia’s coal reserves.

We simply don’t know, because no institutional investors or fund managers outside of those set up to be ethical funds have said that they’re giving serious consideration to the line of thinking in regards to gas on the record.

Although, it should be noted that Macquarie’s executive chairman Simon McKeon told the Australian Financial Review that its coal investments were under review.

“The best of the resource investors are absolutely on to this,” Mr McKeon said.

“Anyone who believes they have literally hundreds of millions tonnes of first-rate high-emitting CO2 coal can no longer blindly believe there will be a strong market for that in 20, 30 years. Putting my Macquarie hat on the best of resource investors are absolutely on to this. “

While the institutional investment community remains relatively silent on the issue of gas investment, as it is about most of its investments and investment strategies, expect green groups to try and fill the void with their own voice.

The sounds of (drilling) silence 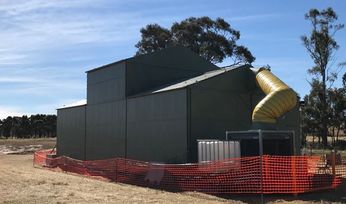 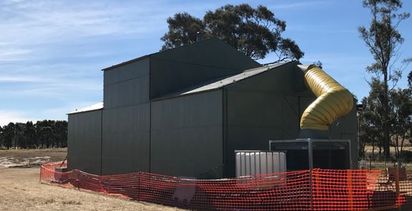