Bill Bookshar has seen the US longwall industry progress in leaps and bounds in his years as a longwall engineer, foreman and assistant superintendent.

Like many he followed his father’s footsteps into America’s coal industry starting as general labor at the Isabelle mine in 1970. After working his way through a bachelor degree in mining engineering he was employed by Bethlehem Mines, firstly as a trainee before progressing to longwall engineer. Between 1977 and 1999 he held various longwall positions including section foreman, longwall coordinator, shift mine foreman and assistant superintendent at Mine 84 in Pennsylvania. Bill now toils away at the Bureau of Deep Mine Safety as division chief of Engineering Services. Bill enjoys dabbling in boating and fishing, water skiing, hunting, gardening and golfing.

WB: As a kid, I lived near a mine. I remember the smoke and smell of the coke ovens. Some days the smell was pretty bad. I saw my Dad and the local miners returning from the mine all covered with coal dust.

WB: I was away from home in the service for four years and wanted to be close to my family. Mining was the only really good job that paid well. I chose mining because of that plus my father was also a coal miner for 44 years.

WB: In 1970 I went to work as a general labor in the Isabella Mine. Pretty dark down there but otherwise not bad.

WB: As a longwall engineer. I made a lot of improvements in the equipment and systems in a short period of time. I was learning something new every day and it was fascinating.

WB: As a labor, pulling track haulage rails and ties. I am not physically cut out for this job. It was all brute strength at that time.

WB: Thomas Duval and Michael Error. Two hard working Mine Foremen who could and did do anything. Everything was possible for these guys. They were smart and knew how to treat people to get them to work for them. Their work ethic was tremendous.

WB: There were many, a few that stick out are; The design of a system to allow for the longwall to successfully mine through 3 entries across the panel, the design and implementation of yield pillars in longwall development sections and the planning, construction, and supervision of a major underground belt conveyor system over 7 miles long. This upgraded the mine from a rail haulage system to a belt haulage system.

WB: The use of electronic control devices within the mine. Mine equipment and atmospheric monitoring equipment have greatly improved the knowledge that miners have about their surroundings. This has saved the lives of numerous miners.

WB: None that haven’t been subsequently broken.

WB: I tried to install a pressure monitoring gauge in a water discharge pipeline. I under-estimated the force behind the natural water head on the pipe and had to call for help to get the water under control. It hurt to call for help, especially when I felt I could do the job without anyone knowing about it. Then, one of my biggest critics showed up to help me.

WB: Walking bleeder entries that contained a combination of higher methane(greater than 1%) and low oxygen(less than 19.5%) that the alarms on my methane and oxygen detectors were constantly alarming. I had to look at both continuously to see what the level of each gas was. I still had over half of my examination to complete in worse conditions.

WB: The death of a fellow employee. He was caught between the miner and the rib trying to troubleshoot tramming problems. He was such a good person and so young.

WB: No, there are too many changing conditions that require adjustments by people who can evaluate the situation and make good judgements on how to respond.

WB: I would like to see improved dust control practices on the shearing head. Miners are miners, they feel that they are tough and can work through anything. 30 years later, breathing all that dust has an impact on their ability to enjoy retirement and family.

Trucking firm has long history of iron ore haulage in the Pilbara. 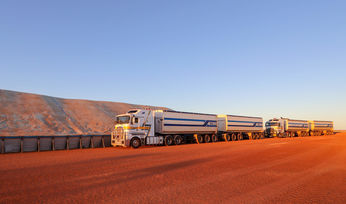 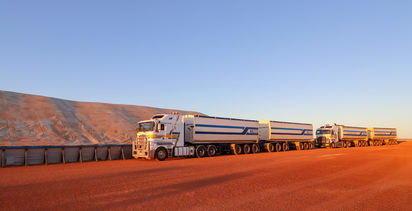 Universities ready to ARC up