DBT TASK teams have been working on a new continuous haulage system with the aim of both automating and dramatically improving the way coal is removed from the development face. The REACH concept is potentially applicable to both longwall development or room and pillar mining.

Today’s high performance longwalls are retreating at ever increasing rates, creating a bottleneck which is proving to be a tremendous cost burden on operators. With an average 3:1 ratio of longwall retreat to section development, the problem is typically resolved by adding additional development sections, representing a massive capital investment and additional people, thus increasing operational costs.

DBT task teams have been working on a project to overcome these challenges for over four years and are busy developing a system which will bring state of the art technology to the underground mining industry. A strategic team was formed including DBT’s research and development group, Professors from Virginia Polytechnic University and Rockwell Automation. These team members were tasked with identifying the bottlenecks and creating solutions to overcome these obstacles.

The project has become known as the R.E.A.C.H project, an acronym for

Rapid Electronic Automated Continuous Haulage. It has evolved into a complete mining system capable of usage in Longwall development or Room and Pillar mining.

The concept is based on a fully automated and integrated control system, utilizing a complete range of Rockwell Automation products, with the steering algorithms being developed by DBT and Virginia Tech.

Utilizing fiber optics for high speed Ethernet IP communications the system is driven by the latest VFD drive, capable of delivering 110kW in a package that is minute in comparison to alternative units available.

The drive was developed jointly between Rockwell Automation and the US Department Of Energy using advanced semiconductor technology developed at the Rockwell Science Center in Seal Beach California. This drive technology has been used on prototype electric vehicles developed for the US military.

Each Mobile Intermediate Traction Unit (MIT) will be powered by two VFD drives which will be controlled as far as speed and direction of travel is concerned from the Control Logic PLC System utilizing the DBT control algorithm. Laser scanners are utilized to control the system and maintain center roadway positioning.

An additional system provides a "Man in Danger Zone" alarm and shut down network. Obviously with a man-less, extremely long system (up to 800 feet) the potential of someone wandering into the movement area has to be taken into account. Thus the second system will detect transmitters fitted to each miner’s belt, monitoring the entry of individuals into the system’s travel path and either warning or shutting off the system.

The system is equipped with a Feeder breaker unit capable of setting roof and rib bolts as the mining process progresses. The purpose being, to quickly install the primary roof support which in the Pittsburgh seam is a critical factor from a safety standpoint. The system can be equipped with a mesh reeling unit to install rib meshing preventing injuries from rib rolls. A series of steel conveyors link the system to the EMC unit (extendable mobile conveyor) which reduces the number of belt moves during production shifts dramatically.

Having conducted the initial surface trials of the system DBT are fast approaching underground testing which is expected to take place in early 2004. This will be a phased approach with the EMC system and feeder breaker being installed first and then subsequently added to as the project progresses.

“This has been one of the most exciting projects I have been involved in,” said Dave Hurd VP sales and marketing, DBT America. “We are introducing technology that will dramatically change the face of longwall development and bring the needed benefits to keep up with the ever improving longwall faces.

“Our strategic alliance with Rockwell has allowed us to throw the full force of two global companies at a major mining industry hurdle that has to be overcome. This represents a paradigm shift in mining methods and we are confident our industry is ready for the transition. Our methodical approach will ensure we get it correct first time and we have received considerable assistance from end users,” he said. 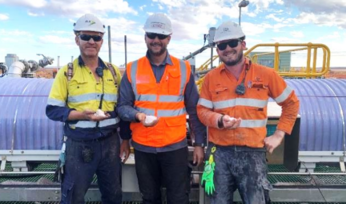 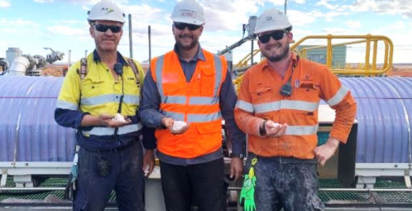