Odd couple on the move

AN unlikely alliance between an Australian mining contractor and a Japanese building giant has spawned a significant new market player. 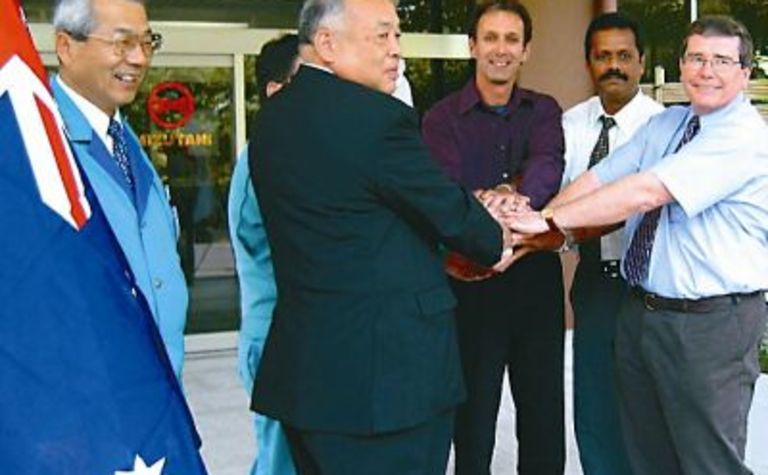 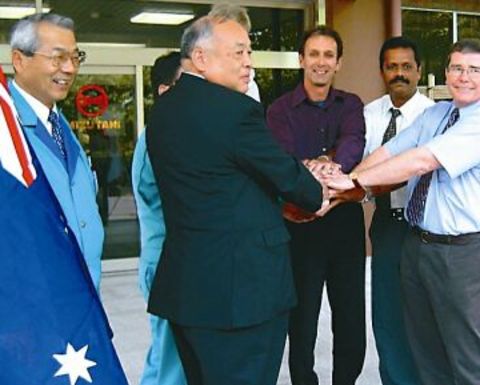 Mizutani and Helvory seal the deal

A massive infusion of Japanese capital has created a new major player in the Australian mining and civil construction contracting market. The new company, HMP Constructions, has been established as a 50-50 partnership between Brisbane-based Helvory Mining & Civil Contractors and Maruichi Australia, a subsidiary of leading Japanese civil construction company Mizutani Kensetsu.

The new joint venture, which took over all of Helvory's existing contracting work in Queensland's Bowen Basin coalfields from July 1, is targeting sectoral and geographical expansion in mining and civil infrastructure-type projects across Australia and into South-East Asia.

The first evidence of the scale of the Japanese investment in the new company came at the end of August, when 28 new pieces of mobile equipment reached Australian shores and effectively doubled the size of the company's equipment fleet. More equipment is due early next year.

HMP managing director Bernie O'Neill said Maruichi Australia was investing an initial $200 million in the joint venture company, the majority of it for new equipment. "Subject to work of course, there is the possibility of doubling that in the short to medium term," O'Neill said.

The joint venture company has taken on all of Helvory's current projects, the 320-plus workers and Brisbane head office. Maruichi is appointing a couple of administration staff to head office and an engineer to each of the company's site offices. While the role of the Maruichi engineers would initially focus on liaison, he said they would take a greater up-front engineering role as HMP took on more civil-type projects.

O'Neill predicts that HMP will achieve turnover of more than $110 million in its first financial year, which would be a jump of nearly 75% from Helvory's $63 million revenue in 2003-04. "That's where we're heading in the short term," he said. "We're starting to work our way up the ladder."

O'Neill said the unlikely agreement between the privately owned and operated Helvory and a Japanese company 10 times its size was beneficial for both parties. He and fellow director/principal Tony Ivory had realised they needed someone able to invest in the company about 12 months ago when they had to turn down an offer of extra work from an existing client.

"They had us going flat out as well in other areas of the mine," he said. "We had to turn around and say, sorry, we can't do it, we're committed to what we're doing.

"It's the first time we've ever said no, and saying no to existing clients is not the best thing you can do."

At the same time, unknown to the Australian company, Mizutani was looking for opportunities in Australia as part of a drive for international growth in civil construction. O'Neill said the Nagoya-based construction group already did about 25% of its business outside Japan, mainly construction of large infrastructure such as dams, highways, railways and airports in developing countries of Asia and Africa in World Bank-funded projects.

It was part of the company's strategy to establish joint ventures with existing companies in the overseas countries, to reduce the risk and cultural hurdles of operating in a foreign environment.

Helvory was first established in 1995 in the Hunter Valley, where its principals had worked for many years in the mining industry, but started winning work in central Queensland when the New South Wales coal industry went into a downturn and by the late 1990s had moved north of the border. From an initial focus on minesite rehabilitation, the company has become known for its work in the rehabilitation of tailings dams, overburden removal and openpit mining. Helvory currently works exclusively in the Bowen Basin, where it holds a number of long-running contracts with openpit mine owners and operators.

"At the moment, for the Helvory Group, rehabilitation is currently only about 20% of our business, so we've actually moved beyond that already," O'Neill said. "Certainly we want to get up there in the big league in terms of major mining and construction companies."

He said the joint venture would aim to expand the mining contracting business – particularly in smaller quick-response projects where Helvory enjoyed a substantial market advantage – while drawing on Mizutani's expertise to compete directly for the large-scale mining and civil contracting projects previously out of reach.

“This joint venture is a significant development in the contract civil and mining sector in Australia,” O’Neill said. “In recent years the industry has been witness to a number of failures of smaller scale contractors as well as increasing pressure on performance expectations of the larger players.

"This joint venture provides the perfect vehicle for both companies to capitalise on their respective strengths and expand their business activities in a controlled manner throughout the region.”

One challenge for HMP's growth plans is the potential impact of the growing global backlog of heavy equipment deliveries on its planned fleet expansion. O'Neill said timely delivery of 28 machines for the initial fleet upgrade resulted from placement of the orders while negotiations on the joint venture were still in progress.

When it came to purchasing, the joint venture was able to draw upon Mizutani's strong position with equipment suppliers, in Japan and elsewhere, he said.

Schaeffler on the march to Yangibana