New mine safety ideas for the new year: Manchin

WITH 24 mining-related deaths recorded in West Virginia in 2006, Governor Joe Manchins State of the State address this week reflected on a year of tragedies and triumphs and addressed a number of new mine safety initiatives.

“While much has been accomplished over the last 12 months to better protect these hard-working West Virginians, with 24 mining-related deaths recorded in our state in 2006 it is clear that there is still much more left to do,” Manchin said.

Manchin said the MINER Act passed last year now meant that every miner in every state can be confident that if the worst should occur, there are practices being put in place to aid in their survival.

“But as proud as I am of that legislation, it was only the beginning of our state’s commitment to our lost miners and their families – and to the miners who continue to strap on their boots and go to work in our mines every day,” he said.

“We must never forget that they are not only providing for their families, they are providing a valuable service for our country by ensuring that our nation has the energy it needs to succeed.”

Manchin outlined new proposals to “protect the miners and families of today but also keep our promise to the families of our lost miners that their loved ones did not die in vain”.

He said the West Virginia Office of Miners' Health, Safety and Training had recently doubled the state’s mine rescue capabilities by establishing and equipping a new mine rescue station, forming two additional state mine rescue teams and purchasing a personnel trailer for mine rescue teams.

Manchin said an additional $4 million would be added to next year’s WVOMHST budget to:

Increase mine rescue training time from 50 to 96 hours per year, per team member;

Offer more competitive salaries to mine inspectors and instructors in order to attract the qualified and capable workers needed to perform these duties;

Increase the salaries of existing instructors and inspectors so the state can retain its “best and brightest”;

Purchase additional mine rescue equipment; and

Continue the abandoned mine mapping project.

Manchin also proposed to introduce legislation to allow the WVOMHST director authority to shut down mines that have had multiple, repeat safety violations.

“Additionally, the tragedies of the past 12 months have demonstrated certain deficiencies in our safety regulations – deficiencies that must be corrected,” he said.

Manchin called for a moratorium on the use of alternative seals in underground mines and a review of the use of “belt air” to ventilate coal mines.

“Once fully implemented, these plans and proposals, coupled with other initiatives, will go a long way toward meeting our goal of making West Virginia the safest mining state in the nation,” he said.

Dozer and truck come together but nobody injured. 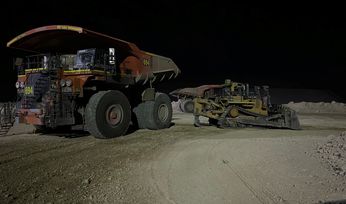 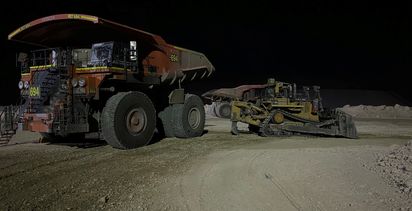