NEW technology involving crystals made from a range of metals and plastics could result in the replacement of multi-storey processing plants used to separate natural gas from contaminants with smaller, truck-sized systems. 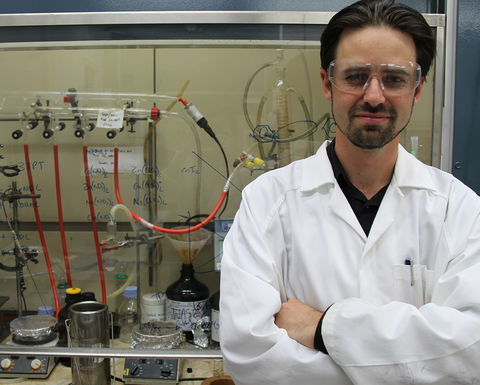 Scientist Mathew Hill’s metal-organic frameworks recently won him one of the Prime Minister’s prizes for science, taking the $50,000 Malcom McIntosh prize for Physicist of the Year.

Hill was one of six winners for 2014 and believes his crystals could be used to make long-lasting filters to clean up natural gas, water, pollution and also safely store hydrogen, carbon dioxide and other gases.

Hill’s Integrated Nanoporous Materials team at the CSIRO are able to make a wide range of customised crystals, which they then map using anti-matter and synchrotron light in order to explore potential applications.

The team is working in conjunction with gas companies to develop the patented technology for gas separation, having already developed a membrane which efficiently separates gas from contaminants and last much longer than traditional membranes.

Patented applications for the food industry are also in the works, while development further down the track could yield carbon dioxide scrubbers and storage systems for gas and hydrogen.