THE recent commissioning of the $A300 million Burdekin to Moranbah pipeline has helped ensure the water security of the Bowen Basin mining industry. 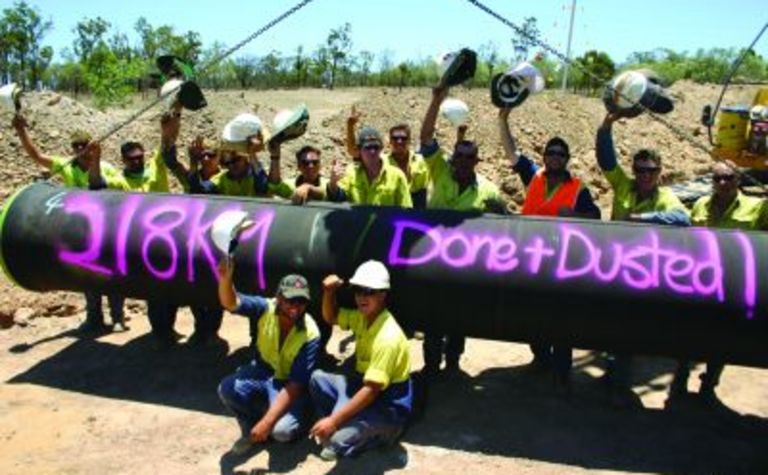 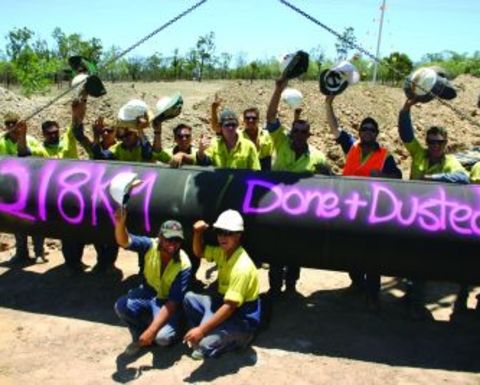 Construction crews working in tough, isolated conditions set records for pipe laying with some days exceeding more than 3km in a single day.

The 218km pipeline is capable of transporting 17,000 megalitres of water per annum from the Burdekin River to the Moranbah region.

Due to recent drought conditions in central Queensland the water storages in the area were at critically low levels. Queensland Government water corporation SunWater recognised that even in normal years supply would not support the demands of a growing coal industry.

Shortly after making the Gattonvale decision SunWater held talks with northern Bowen Basin coal miners about additional water needs for new mines. This led to the commercial development of three additional pipelines to support the growing mining industry there.

The first of the pipeline projects was the $21 million Eungella Pipeline Eastern Extension to deliver water supplies to three new coal mines being developed east of Moranbah. The 47km pipeline was completed in December 2006 and can carry 5600ML a year.

The second and largest development was the Burdekin-Moranbah Pipeline, which was fully commissioned in August. The entire 218km was installed in about nine months.

The third development was the $20 million Eungella Pipeline Southern Extension, which provides 2500ML for two major coal mines south of Moranbah. Construction of the 70km gravity pipeline was completed in October and the pipeline was fully commissioned in December.

There may be more to come. SunWater is carrying out further investigations into the Connors River Dam project.

The Connors River Dam was identified in the Central Queensland Regional Water Supply Strategy as the preferred medium to long-term water supply solution in the Isaac-Connors subregion in central Queensland.

The proposed dam is located on the Connors River, near Mount Bridget in Broadsound Shire, about 235km northwest of Rockhampton and 120km south of Mackay.

The associated pipelines from the dam will stretch to the northern Bowen Basin and service areas of highest demand for the dam’s stored water.

“This will help meet the future water demands of industries and communities throughout the region,” Grant said.

The Queensland coordinator-general has declared the Connors River Dam a “significant project” under the State Development and Public Works Organisation Act. The coordinator-general will also refer the project to the Federal Government to make an assessment and decision on whether the project should be deemed a “controlled action” under the Environment Protection and Biodiversity Conservation Act.

SunWater is putting together a preliminary business case. Once the Coordinator General releases the Connors River Dam draft Terms of Reference for public comment, SunWater will prepare a detailed Environmental Impact Statement. That is expected to be available by mid 2009.

The EIS will ensure any positive or negative environmental, economic, cultural or social impacts associated with the dam or associated pipelines are identified. Appropriate management steps will be taken.

The coordinator-general will review the EIS and make a decision on whether to put the project forward for federal approval. Approvals providing, construction should start in about 2010.

SunWater was also appointed as the proponent to develop the Nathan Dam project business case. The proposed Nathan Dam will be located on the Dawson River, about 75km downstream of Taroom.

Water from the dam will be transported via a new pipeline to coal mines and power stations in the Surat Basin.

Water will also be released downstream to coal mines in the southern Bowen basin, to existing and new customers in the Dawson Valley Water Supply Scheme and, as required, to meet urban supply needs in the lower Fitzroy and other parts of Queensland. This is in line with the Government’s objective of developing a state water grid.

Grant said SunWater was progressing well with detailed studies being undertaken as part of the business case development. Factors to be considered include optimal dam design and costs; expected water availability and demands; and the overall environmental, social and cultural impacts of the project.

Under the expansion proposal CITIC also wants to deepen the mine pit and add infrastructure. 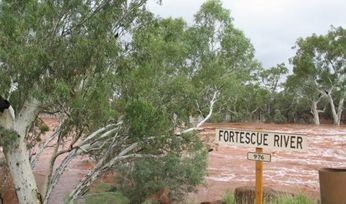 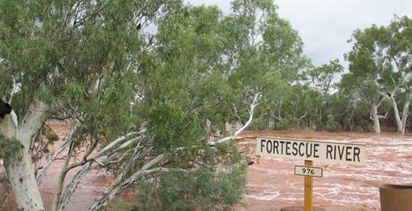 NRW for Nammuldi and Gudai-Darri works