A STEP forward in voice communication will be released to the market by AMPCONTROL with their new VoiceCom system, at the Mining Electricians Safety Conference to be held in Brisbane this week. 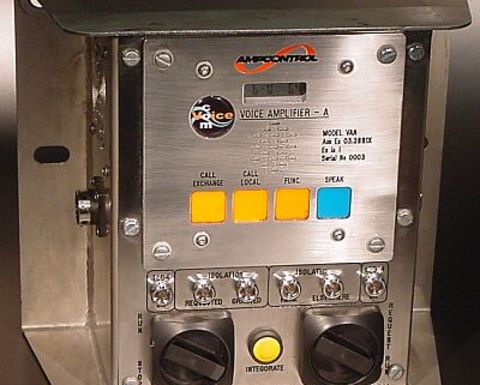 The Ampcontrol design team have incorporated many advanced features into the operation of the new system which include high quality user recordable messages, comprehensive diagnostics to aid fault finding and battery management capabilities, aiding to reduce overall downtime.

VoiceCom provides an easy user interface for operators allowing the entire system to be configured from the VoiceCom controller. Adjustment of pre-start tone, voice messages and individual amplifier parameters can be easily altered to provide optimal performance in the harsh underground mining environment.

The system comprises two main components, the VCA Controller and the VAA Amplifier.

From the VCA, the battery voltage and current of each VAA can be monitored. The user can also adjust the VAA volume and battery charging current.

Digital and/or Modbus serial inputs control playing of pre-recorded messages and in addition to this, a software package that allows the user to generate their own messages is included. Messages are recorded onto a PC and downloaded into the controller via a memory card.

The VAA Amplifier is the field communication module for the system and has an internal microphone and connections for two speakers. Four buttons are provided for controlling the transmit and calling functions as well as an LCD to assist with trouble shooting.

The unit is mounted in the Ampcontrol supplied stainless steel IP66 housing which can also accommodate speakers, remote isolation and lanyard stations.

The VoiceCom design criteria allows for compatible integration with other systems, as individual components or the entire package can be retrofitted to an existing system.