Skills on show at rescue contest

ANGUS Place Colliery took top prize at the Australian Mines Rescue Competition held on Saturday at Centennial Coals Awaba mine. Once again the competition proved to be a great learning experience for competitors, reports the International Longwall News man on the ground, Queensland Mine Rescue Service operations manager Lindsay Creighton. 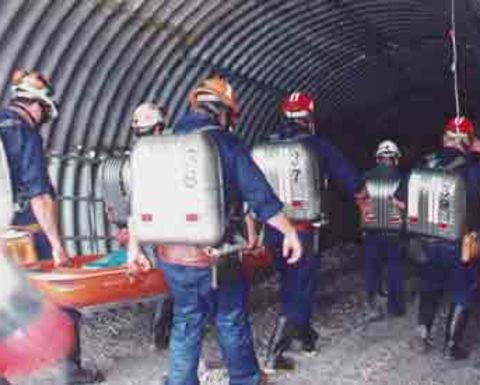 Queensland Mine Rescue Service (QMRS) was represented by Oaky Creek 1 Mine, North Goonyella Mine, Moranbah North Mine and Crinum Mine. Tasmania had one representative team from the coalfields of Fingal.

The competition presented all of the competing teams with a challenging day both physically and mentally.

The first exercise was held underground. Teams were briefed on a range of problems which required their intervention to resolve or assist mine management with an irrespirable atmosphere situation.

The teams were told of a major ventilation disruption which was believed to be caused by a roof fall somewhere in the mine. The teams were asked to prepare equipment to go underground and report to the fresh air base controller.

The teams were asked to complete three tasks:

To check the upcast shaft area for condition of ventilation appliances and report conditions to the incident management team. Locate ventilation stations near the shaft and take bag samples of the atmosphere and complete ventilation surveys at these locations.

Teams were told to report to fresh air base and wait for further instructions. After a short period the teams were advised of mine personnel missing during their attempted escape from a part of the mine during the mine evacuation. Teams found one person unconscious wearing a breathing apparatus nearly out of air and another person with low air in his breathing apparatus who was concerned for his workmate. Teams were asked to apply the correct first aid treatment, prepare the unconscious person for transport and return them to the fresh air base.

To build a regulator in the main south headings to a nominated standard. At the regulator site a team member was asked to demonstrate his proficiency in changing from a BG4 breathing apparatus to an oxy box self-contained self rescuer.

Fire Fighting Exercise: Teams were asked to respond to a machine fire where they encountered injured personnel and had insufficient lengths of fire hose to extinguish the fire. The teams had enough equipment to extend a pipeline to enable them to effectively fight the fire. Teams were also required to treat the injured mine workers with appropriate first aid strategies.

First Aid Exercise: Teams were asked to respond to an incident where maintenance personnel were working on coal handling plant where an explosion occurred. They were required to make the area safe and treat a total of four patients for a range of injuries including – fractured bones, burns, shock, unconsciousness, internal injuries, spinal injuries and others. The teams were required to apply the appropriate first aid strategies and apply appropriate calls for additional assistance and notification to mine management.

Compressed Air Breathing Apparatus Exercise: Teams were asked to check on a set of seals underground to determine if seals had been damaged causing a carbon dioxide problem in the mine atmosphere. They were also advised that two bicycles were found near the mine entrance and that two cap lamps were missing. Teams were to check the seals using compressed air breathing apparatus to do so. Teams were advised that there was a possibility that two persons had gone underground and to keep an eye out for any persons during their task. Teams did find two people who were overcome by carbon dioxide and required to effectively rescue these persons.

All exercises were a simulation only. No team member or other persons were exposed to unacceptable risk.

All teams performed to a high standard and were exposed to learning opportunities throughout the competition.

The competition was assessed by a team of assessors from both Queensland and NSW. At the end of the day awards were given, and even though there was a winning team there was no losing team.

All teams that competed are winners and are a credit to the Australian coal mining industry.

Other results will be available to teams over the next week or at debriefs to be arranged by the mines rescue service in Queensland and NSW.

District assessors John Rowe (Qld), Dave Gordon (NSW), Steve Bullough (Qld), Tony Glashoff (NSW) and Cole Klease (Qld), who are retiring from the role of district assessors, received a token of thanks from the respective mines rescue services for their dedication and tireless efforts in setting up and running these competitions for a number of years.

Thanks to all officials helpers and others who also put in a huge effort to make an event of this nature happen successfully.

The competition will be held at Broadmeadow Mine in October 2006.