MINARCO senior mining engineer Graeme Rigg looks at the software in use in Australias longwall mines. International Longwall News reveals for the first time the full results of the survey. 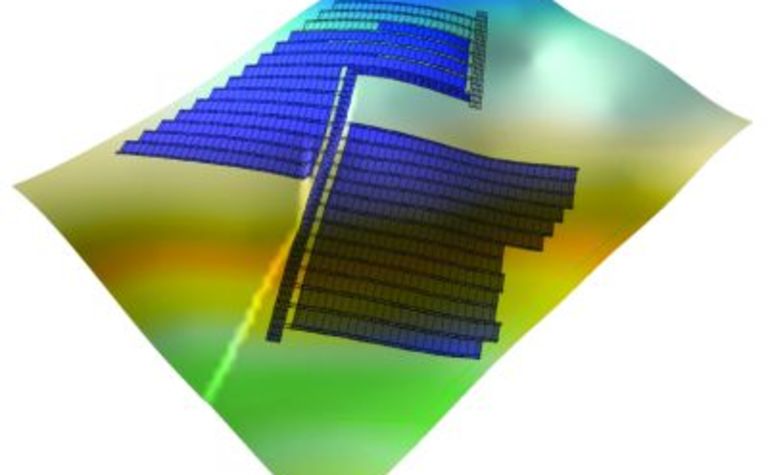 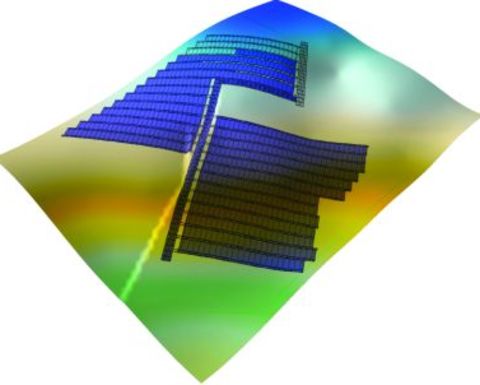 Back in 2001 the mine planning process was in a state of flux. Some mines were still using standard CAD software to do the mine planning. The design work was generally carried out by the mine surveyors. Many of the more progressive mines were using ECSâ Minex suite of software.

Geological modelling was undertaken using the Horizon component, from which seam structure and coal quality grids were created for subsequent mine design in the Eclipse package.

Once the design detail had been finalised, reserves could be estimated and mine scheduling carried out. The mine schedule output could then be used in spreadsheet financial models to assess costs, revenue and subsequently, project value.

The Minex suite provided far superior means of assessing various mine design options, permitting planning decisions to be made on a financial basis rather than the seat-of-the-pants process that had preceded.

Maptek (with the Vulcan package) and Mincom (with the Minescape package) provided similar functionality: mine planning capabilities hanging off the back of geological modelling software. But Minex definitely had the bulk of the market share in comparison to Vulcan and Minescape. Another player in the market was Ohio Automationâs ICAMPS package, although market penetration of the product was minimal.

The new kid on the block was Rungeâs XPAC software. It didnât provide any geological modelling capabilities, focusing on mine planning and scheduling. A separate software package (XERAS) developed by Runge provided the ability to import XPAC schedule outputs for better integration into the financial analysis stage. By late 2001, XPAC was making definite inroads into the market.

Some four years later, what has changed? To allow an objective assessment to be carried out, a survey was sent out to most of the longwall operations and projects (those that have commenced development) in Australia.

As the percentage of survey respondents is significantly less than 100%, any trends observed in the survey responses should be considered as indicative only.

The survey was broken into three parts:

Ten questions were asked for each era, with the questions focusing on geological modelling, mine planning, reserve estimation, mine scheduling and financial evaluation. In each area the questions follow two basic lines â (a) what software is used and (b) who carries out the task (whether the task is done by minesite personnel or done externally).

The latter line of questioning is aimed at determining whether software providers have been successful in making the software sufficiently user-friendly to allow minesite personnel to use the software as and when required.

Minesite personnel appear now to have a greater range of skills and a greater awareness of the economics of a mining operation. This needs to be balanced against the increased workloads of minesite personnel. In many instances it is more efficient and timely to farm the work out to people who are using the software on a more regular basis.

What software package is used for geological modelling?

Figure 1 indicates that things havenât changed much in terms of geological modelling software, with Minex holding the lionâs share of the market, followed by Mincom and Vulcan. The single response in the âOtherâ category is for a mine that uses civil software for the geological modelling process. Figure 1 also indicates that very little change is envisaged in this area over the next few years.

Who carries out the geological modelling?

Figure 2 illustrates the general demise of the head office planning groups within the industry. The reduction in geological modelling by these groups has been offset by an increase in work done by minesite personnel and external consultants. Figure 2 also indicates that more operations are planning to carry out the geological modelling using minesite personnel over the next few years. This will involve a further reduction from head office planning groups, as well as a slight reduction from external consultants.

What software package is used for mine planning?

Figure 3 indicates a dramatic swing towards XPAC, with significant reductions in planning work undertaken using Minex (Eclipse) and standard CAD software. It should be noted that XPAC mine planning is done within IntelliCAD, but the XPAC UG add-in module simplifies the process significantly by automating the generation of development and longwall panels, creating scheduling blocks and calculating average seam thickness and quality values for each scheduling block. The in-house packages are not related. Figure 3 indicates further gains for XPAC over the next few years.

Who carries out the mine planning?

What software package is used for reserve estimation?

Figure 5 illustrates once again the dramatic inroads made by XPAC, primarily at the expense of Minex and Mincom. Survey responses indicate that additional operations are intending to adopt XPAC in the next few years. Once again the in-house packages are not related. 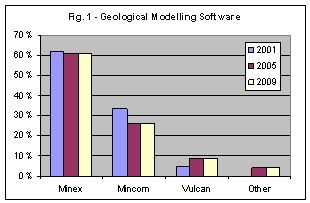 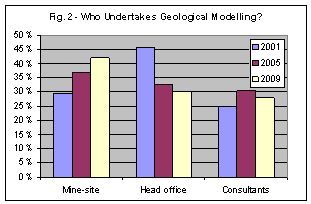 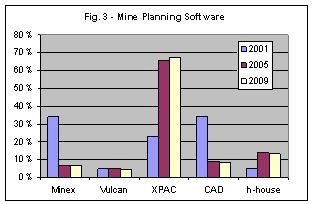 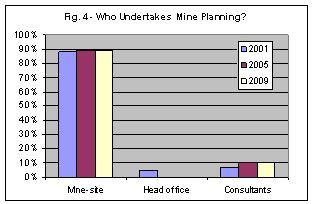 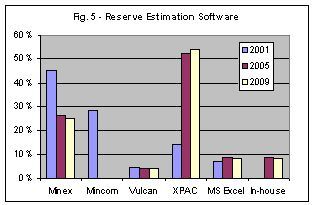 Who carries out the reserve estimation?

Figure 6 illustrates once again the general demise of the head office planning group. The reduction in...click here to read on.

Deswik.GO is a design and scheduling tool for open cut mines that gives planners options. 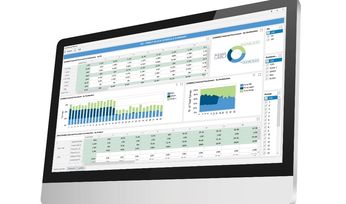 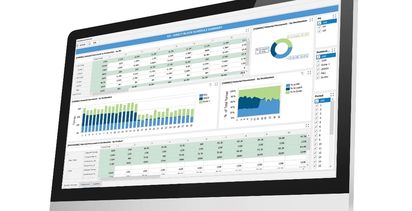