IN 1986, Ulan began its underground longwall mining operation and became the first coal mine in Australia to install DODGE Controlled Start Transmission (CST) units. Twenty years later these original units are still in operation at the mine, in addition to many more CSTs Ulan added during periods of expansion in 1996 and 2005. 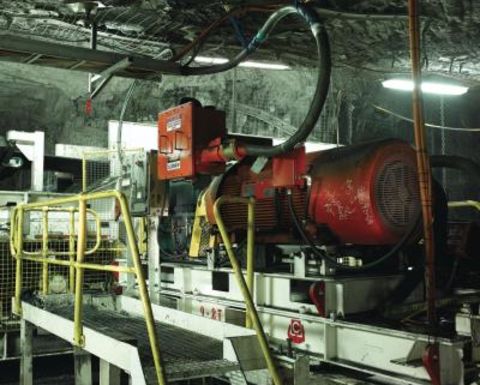 The mine currently produces about 6.4 million tonnes per annum, 5Mt of which are exported, with the remainder used to supply domestic power utilities.

Like most mining operations, Ulan works hard to keep production costs in check.

With an average down-time cost of about $50,000 per hour, Ulan officials have had the foresight to look past the net present value of their equipment purchases, focusing instead on the long-term savings that reliable equipment brings.

A total cost of ownership (TCO) approach and a focus on reliability has led Ulan to stick with the CST, according to Ulan conveyor engineer Gary Wilton, who has been with Ulan Coal for 22 years and says he’s the first bloke in Australia to ever work on a CST unit.

Wilton says a regular monthly maintenance is performed on the CSTs, including vibration and oil analysis.

“We track the history of each of the 18 units, and I can tell you that these units are very reliable. That’s important, because we can’t afford to be down,” he said.

Wilton is responsible for keeping the conveyors running and says the units are easy to work on and troubleshoot: “Being able to work on this equipment ourselves is a big plus for us.”

The portable nature of the units has also meant that the mine has been able to pull a CST from one area and move it to other areas as the mine has expanded.

In order for Ulan to maintain its production levels, the CSTs need to perform up to expectations to ensure the conveyors run optimally.

In assessing the product’s performance, Wilton believes the benefits of using CSTs are clearly demonstrated by its load-sharing capabilities on the long conveyors that employ multiple drive systems.

For example, in a two-kilometer section, Ulan has installed two CSTs to provide the power required for the load. One CST is used as a “slave” to the second unit, so that each equally shares the load.

Wilton says using the CSTs in this way allows the operator to control the torque and speed as needed, depending on the load being carried.

But perhaps most important to Wilton is how the soft-start capabilities of the CST can accelerate high-inertia loads at a controlled, smooth rate, no matter what the load. This feature is especially important underground because Ulan uses fabric belts, which are more elastic than steel belts.

“When these belts get wet, they can stretch,” says Wilton.

“If we couldn’t start the conveyor slowly and smoothly, we could get a sling shot affect that would really damage the belts, plus put a strain on the other components. The bottom line is that the CST provides a smooth start, no matter the conditions or the load.” Fosterville miner stands with those riding to survive