INTERNATIONAL Longwall News’ sister publication Mining Magazine, produced by Aspermont UK, looks at the current state of play with the automation of longwall systems worldwide, from the technology to practical implementation. By Murray Harcus 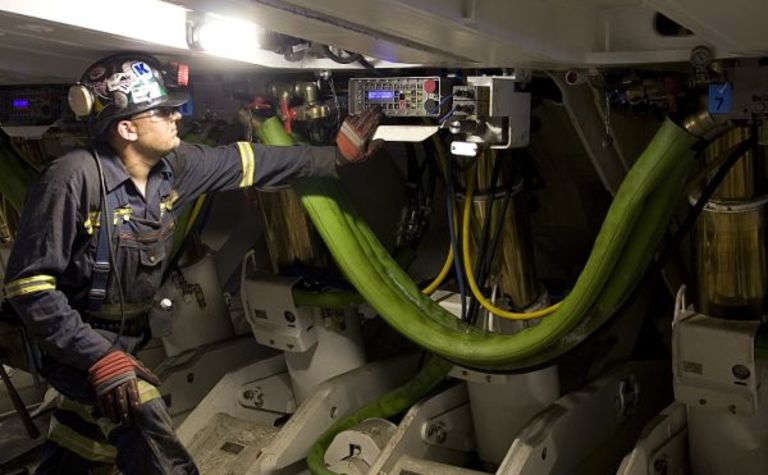 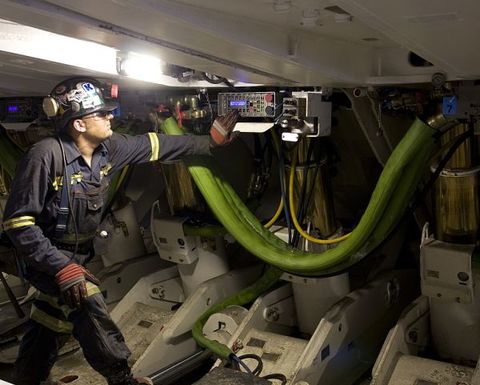 Bucyrus' "intelligence in each shield" philosophy.

Sustained full-face automation under all conditions has been an industry goal for many years. Since 1985, the installed power of longwall equipment has increased three-fold, resulting in increased exposure of operators to high levels of respirable dust, fly rock, high pressure hydraulics and moving equipment.

Longwall OEM Eickhoff has played an important role in the history of automation, dating back to the late 1960s when they introduced the shearer speed control, known as ‘Eicomatik’ to the market. The first memory cut was performed by an Eickhoff shearer in a German coal mine in the 1980s and by the early 1990s the company was offering the Defined Face Opening (DFO) extraction function to the Australian market.

Intensive research into longwall automation began in 1999 with an Australian Coal Association Research Program (ACARP) funded project, undertaken by Australia’s Commonwealth Scientific Research and Industrial Research Organisation (CSIRO) Exploration & Mining and the Cooperative Research Centre for Mining Technology and Equipment (CMTE), now CRCMining. The Longwall Automation Steering Committee (LASC) was established in 2000, comprising ACARP industry representatives, while also working closely with the broader coal industry, the OEMs, researchers and mine safety authorities. The first project funding of $A4 million was awarded in June 2001, with CSIRO and CRCMining contributing a further $2 million. In addition, mine operators contributed significant funds and support by providing expertise and host sites.

Bucyrus became the first longwall OEM to collaborate with CSIRO, working on face alignment and horizon control at the three LASC R&D sites: BMA’s Broadmeadow, Xstrata’s Beltana, and Anglo’s Grasstree mine. An Eickhoff SL 300 shearer at Grasstree was equipped with an inertial sensor (INS) system and Ethernet communication by means of WiFi, with corresponding software upgrades subsequently completed. The equipment is still in use with the focus on face alignment purposes.

The second stage of the project involved additional ACARP funding of $2.42 million to produce a commercial prototype suitable for uptake by the OEMs. At this point, OEMs began committing funds to their in-house commercialisation processes.

Mark Bennetts, executive director of Australian Coal Research Ltd, tells Mining Magazine: “OEMs were kept informed from the earliest stages of the project, and despite being initially cautious, they became more enthusiastic as the potential of the technology was proven. CSIRO and mine operators continue to work closely together and share information in an effort to continue to improve the technology.”

The final outcomes of the project include automatic face alignment, sensors and software for automatic horizon control, open communication systems between longwall components, an information system that allows on-line 3D-monitoring of the entire longwall system, and several new geotechnical monitoring systems. The project also led to the development of a high capacity underground communications system and associated standard for data communication.

Customised inertial navigation technology was incorporated with hardware and software components that were specifically developed for the longwall automation application, collectively referred to as LASC technology. The shearer-mounted hardware component of the LASC technology is referred to as the Shearer Position Measurement System (SPMS), comprising three hardware blocks: the INS, the managed uninterruptable power supply (MUPS) and the central processing unit (CPU). Absolute shearer mainframe position and orientation are continuously measured using a high quality INS.

When OEM-derived measurements of shearer ranging-arm angles are added in, drum positions can then be calculated, leading to accurate measurement of the actual mined floor and roof horizons. Prior to the longwall automation project major roof support manufacturers already had sophisticated automation systems for face-motion and geometry control, but there was no reliable means of measuring the true 3D position of the armoured face conveyor (AFC) or the individual shields.

This meant that sustained closed-loop control of face geometry was not possible. The CSIRO states that the SPMS fills in the missing piece of the puzzle. Because the shearer is linked to the AFC, and thence to the shields, the position of all the components of the longwall face can be determined as the shearer passes by. Proprietary OEM automation solutions then use this information as feedback to control the shape of the face.

A spokesman at the LASC comments: “The LASC technology has been delivered to the industry through commercialisation agreements with longwall equipment manufacturers. As part of the longwall automation strategy, existing longwall mining equipment from various vendors forms an important and integral part of the overall control system. It is therefore essential to ensure inter-connectability and inter-operability between the LASC Technology and the OEM longwall equipment.”

He adds: “The objective of these standards is to ensure that all inter-connected components, both existing and yet to be developed, interact and operate in a predictable and consistent manner.”

The commercialisation of the technology resulted in non-exclusive worldwide licensing agreements signed by Bucyrus Australia, Eickhoff Australia, Inbye Mining Services, Joy Australasia and the ZZM-Kopex Group. This group represents the majority of the global longwall equipment manufacturers. An ACARP project to assist industry take-up of the technology provides a software environment to verify that manufacturers’ LASC-compatible systems meet the new industry-wide automation standards.

Since acquiring LASC licenses, the OEMs have gone on to produce their own in-house automated equipment.

When asked if CSIRO is kept up to date with advancements made by OEMs in longwall automation, David Reid, CSIRO principal research engineer comments: “CSIRO continues to work with the OEMs. In addition, CSIRO with ACARP funding has developed LASC-compliance software utilities which are freely available to the OEMs and industry to confirm that existing and newly developed LASC systems comply with the LASC specification. The LASC-compliance/certification will ensure that LASC technology will work across mixed-supplier equipment.

The CSIRO is continuing with the development of technologies to enhance the LASC system, with work being funded in part by returns from the uptake of LASC. The Australian coal producers are increasingly focussed on automation as being essential to their operations and CSIRO is the major R&D provider in this area.”

The demand for automation worldwide is very high. In the near future, Eickhoff is set to deliver all shearers ready equipped with its latest ‘EiControlSB’ software, offering all Eickhoff customers the opportunity to use their shearer in automated mode, whether having other longwall equipment that is automated or not.

Automation has also led to the development of open standard software interfaces and bus systems which are replacing proprietary systems, therefore the compatibility of machinery from mixed manufacturers will be higher than in the past. This is expected to lead to an increase in the installation of systems provided by multiple suppliers. This is exemplified by the sale of an automated longwall system to Vale’s Carborough Downs mine in Queensland. Tagor (a Kopex subsidiary) supplied the roof supports, which were equipped with electro-hydraulics and monitoring systems from Tiefenbach, whilst Inbye supplied the coal clearance system and Eickhoff the longwall shearer. The remaining parts and equipment were supplied by several Australian companies.

The upgrading of existing longwall equipment to comply with automation standards requires various sensing devices, additional wiring upgrades and additional PLCs. The status of existing equipment needs to be considered and the communications environment may require updates. In most cases, however, an upgrade to the shearer to provide the latest automation technology is possible. Greenfield sites are expected to perform better under automated conditions though, as they allow for planning and engineering in advance resulting in optimum system setup.

When asked about the future of longwall automation, a spokesman for Bucyrus tells Mining Magazine: “There are many partially automated longwall systems around the world – Bucyrus numbers are well above 100 – but we are still some way away from a fully automated longwall. The closest is our automated plow longwall system, which allows for remote operation; but shearer faces will require operators for quite some time yet. Reliable coal-rock detection will be an important piece of the puzzle for achieving true full automation.”

Mark Bennetts considers the wider application of the research: “CSIRO has some ideas for further longwall automation enhancements and ACARP therefore continues to have an interest in this area. The principles and technologies learnt from longwall automation are now being applied to research in shovel automation in an effort to bring similar benefits of safety, productivity and up-time to open-cut mines.”

Bucyrus is only global supplier of plow longwall systems, though Czech company Ostroj and a few Russian and Chinese players have also supplied plows to local markets.

As the leading OEM in this field, Bucyrus states that only plow longwall systems have been fully automated for some time, though as a mining method, plows have still not been as widely embraced as shearers. The company states: “This reluctance has been based on a performance perception dating back to the 1970s when plow systems were not automated and did not possess the cutting and conveying power of today’s systems. After research into the most efficient mining method for low seam coal, Bucyrus plow longwalls have proven to be the safest, most cost-effective and most environmentally friendly way to extract coal from low seams. Shearers can operate in seams of 1.5 to 6m, but are considered less than optimal in seams of less than 2.3m. Plows can operate down to 0.6m and up to 2.3m.” Automated plow systems are operated in China, the Czech Republic, Germany, Kazakhstan, the US, Mexico, Poland, Ukraine, and Russia.

Conventional plows typically only allow the plow ‘pushing’ pressure to be set, not the cutting depth, with the result that the cutting depth varies with coal hardness. Bucyrus has developed the Gleithobel plow system where incremental plowing is used, where the plow cuts an exactly defined depth, regardless of coal hardness, seam structure and faults.

This cutting depth is electronically preset using accurate stroke sensors and an advanced algorithm horizon control allowing control of the plow angle. This ensures that the plow does not dig or climb unless required by the seam geology. It allows the plow system to operate exactly along the seam-floor boundary, even following undulated seams. This results in balanced loads on conveying equipment and a steady advance of the longwall through the seam.

On August 25, 2010, a fully automated Bucyrus Gleithobel plow system GH 1600 achieved a daily output record of 16,894 clean tonnes at the Bogdanka mine in Poland, a new production world record for plow longwalls. During 10.5h of operation, the plow made over 300 passes along the 250m panel, travelling a total distance of 76km. The plow face advanced a total of 21.6m with a cutting height of 1.5 meters; an achievement deemed impossible for a shearer in these seam heights. Each of the 173 roof supports was equipped with its own PMC-R roof support control. Bucyrus states: “The plow longwall installed in Bogdanka is working in automatic mode, allowing a significant reduction of resources required at the face during operation to control the plow or advance the shields. In other words, an automated plow face doesn’t need operators on the face.” Bogdanka is considering the purchase of another longwall system in 2011 for its new Stefanow panel, with the most recent automated plow plongwall installation at Cliffs’ Pinnacle coal mine near Pineville, West Virginia, USA in July 2010.

Part two will be published tomorrow 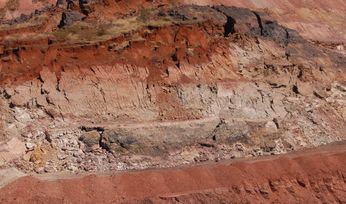 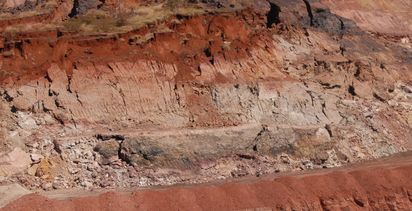