The search for filter mediums

Initial testing has been carried out using a variety of synthetic material mixes, particularly terylene and polyester. Testing has produced some encouraging results in efficiency in the sub micron area, however the backpressure levels have resulted in reduced filter operating life.

Early trials indicated the initial water surge from the scrubber and ongoing air stream moisture could remove the retardant, creating a potential ignition risk should the scrubber inadvertently lose water.

De Jersey said fibreglass media showed excellent potential because of its tolerance to high operating temperatures -- in excess of 200C as opposed to the DA100 media of around 100C or less. As it is a relatively inert material there was also a possibility it could be washable.

“The major problem with this comes from the mechanical stability and thickness required to filter out small particles. It is this “friable” nature that is the problem of both its use and maintained filtration efficiency if it is recycled. And, of course, the number of recycles needed to make it cost efficient,” he said.

“We were unable to calculate the amount of stress fatigue that could be tolerated before major failure, although we suspect it would be tolerable in single use applications.”

Due to the friable nature of fibreglass fine sharp glass (silica) particles may be created that are of biological concern and thus may lead to health and safety issues.

De Jersey said the problem could be overcome by use of either secondary filters or polymer coating, both of which would defeat the object of the filter in terms of cost effectiveness and the ability to recycle.

Other developments in the area of new filter configurations, such as oval shaped filters, may offer a shape and size that suits the space restrictions found on underground mine equipment.

The company continues to work closely with the 3M Corporation on new and innovative materials and filtration methods, and is also associated with a major research company on the research and development of a revolutionary new media for filtration applications.

App launched to make it easier to find diesel filters. 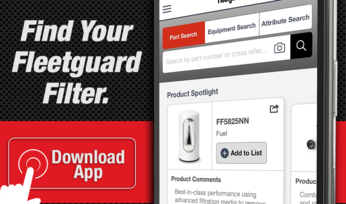 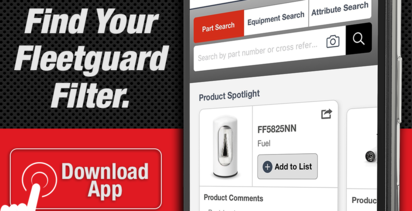 The search for filter mediums