ARCH Coals Sufco mine is one of the highest producers in the US Western coal fields. American Longwall Magazine profiles current operations and the mines plans for the future.

Located in the Salina Canyon, Utah, the Sufco longwall produced 7.6 million tons in 2005 and is well on its way to producing roughly the same in 2006. The mine has been quietly beavering away, producing great tonnages since its inception in 1941.

Today, the longwall, based on current leases and reserves of 45 million tons, will continue producing until 2013. Thereafter, Sufco expects to mine coal in the Lower Hiawatha seam – extending the mine life until 2023.

Sufco mines coal from the Upper Hiawatha seam which ranges from eight to 18 feet thick. Of that, Sufco typically makes continuous miner cuts 9ft tall and leaves at least 1ft of top coal in the roof as primary roof support. Floor coal is left as well to maintain coal quality and increase the stability of the entries.

The overburden is interbedded sandstone, siltstone and shale within the Blackhawk formation.

The longwall features a Joy 7LS03 shearer, 163 Joy 970 UST two-leg shields with RS20 controls and DBT beam stage loader/crusher and face conveyors. On average, the longwall advances about 60ft per day, and 1300ft per month. The total average daily tonnage out of the mine is about 31,000 tons and the longwall cut range is 8.5ft to 12.5ft.

For ventilation, Sufco utilizes one main exhausting mine fan powered by a 1500hp motor. There are seven intake portals where fresh air enters the mine and the sections are ventilated with axial flow section fans. Sufco employs a wraparound bleeder system.

According to Sufco general manager Ken May and engineering manager John Byars, the main challenge at the mine is the limited capacity of the surface facilities. The maximum storage capacity on the surface is about 30,000 tons.

The mine utilizes a conveyor system consisting of, from the portal inby, a 16,400ft, 54” belt at a rate of up to 3200 tons per hour. Inby of there, 60” belts are used. To control peaks and valleys of total coal going out of the mine, a bunker with a 750t capacity was placed at this change point to distribute a more uniform flow.

The major obstacle is the 54” main belt going out of the mine, which limits coal conveyance rates.

Sufco utilizes ICAMPS for its mine planning software and Microsoft Project for planning its longwall moves. During the actual move, miners are divided into crews on three shifts, 24 hours a day, seven days a week until the longwall is back in operation.

Sufco uses Huesker mesh on the face and above the shields during longwall shield recovery and roof bolts are placed in the top before shield removal. On average a move takes 10 days (measured from when the Huesker is placed on the face until the shearer cuts coal in the new panel).

Sufco has implemented a rigorous predictive maintenance program where sensors are set up throughout the mine, such as in bearings, on the beltline, or the fan.

From this the vibration data is then collected and analyzed and it is determined how much life is left in the bearings so they can be replaced before failure.

According to May and Byars, infra-red thermography is also used in predictive maintenance, where an infra-red camera that can detect heat change to one-twentieth of a degree Celsius is used. Electrical installations are then analyzed to catch any heating problems before actual failure occurs.

One preparation shift per day in each of the sections and the longwall carries out maintenance. May and Byars said each section mechanic is assigned equipment to do all inspections as per the service package for that equipment. “This means that all equipment including the longwall components are inspected and maintained four times a week,” May said. “All diesel equipment is pulled out for full service every 200 hours of operation.”

In longwall development panels, three entries are used; and for mains development, in most cases, seven entries are utilized. A typical roadway entry is 9ft by 18ft; a typical gateroad pillar 120ft by 170ft; and a typical main pillar is 100ft by 200ft. Resin bolts with 5in by 5in spacing are used in all haulage entries and belt line entries. Mesh is applied when under heavy cover or as conditions require.

Sufco currently has two development sections operating, both utilizing Joy 12CM12 continuous miners. In each section there is a Fletcher roof bolter and Joy 10SC32 shuttle cars. About 240ft of section advancement is achieved daily.

Dodge Megacabs and 1 tons with MSHA approved Cummins diesel engines are used to transport miners to their respective working sections with a 45-minute trip taken to the longwall face and 30 minutes to development sections.

At Sufco the average age of the 345-strong workforce is 42 years old. “We’re lucky to have some of the most experienced and dedicated miners in the coal industry working here,” said May.

Fosterville production strong but other Kirkland sites restricted due to COVID-19. 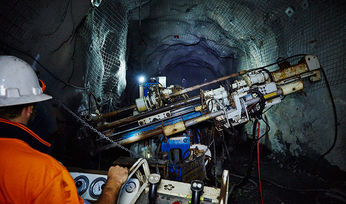 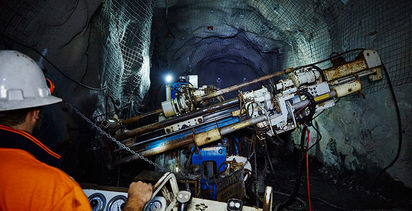