MIM in complete control at Oaky North mine

MIM Holding’s Oaky North mine in Queensland’s Bowen Basin reached an important milestone in July this year — completion of its first longwall block. Early production figures have proven the fledgling longwall’s ability, with output peaking at 570,000 tonnes for the month of June.

Mine manager Ken McLaren was enthusiastic about the success of the first longwall block and in particular the 570,000t in June. “This is awesome for a mine that’s only been running five months,” he said. “Some individual days we cut over 40,000t in a day, though we know there were some days we didn’t produce much coal at all, so we’ve still got plenty of room to improve.”

McLaren believes an important factor in the mine’s success to date is the development lead established over the three year mine establishment period, plus the focussed efforts of the workforce. The philosophy of providing sound, well-planned infrastructure outside of the longwall itself also formed part of the foundation for Oaky North’s success. “Although the longwall produces all the tonnes, it doesn’t matter how good your longwall is if the rest of it falls apart,” McLaren said.

The approach extended across the mine to areas such as secondary gateroad roof support, quality road development, rib meshing, a capacity-strong outbye system and a comprehensive automation and control system.

Oaky North’s mine infrastructure includes a powerful outbye conveyor system — more than 5.5km of conveyor from coal-face to surface stockpile, providing peak throughputs of 6500t per hour. McLaren said the outbye system supplied by Continental Conveyor had plenty of capacity up its sleeve. “The belt system must deliver to produce in two days in June over 40,000t. We were nowhere near the capacity of our longwall-to-stockpile transfer capacity,” he said.

The outbye system comprises two 4500tph, 1.6m-wide maingate conveyors (one for each Oaky North longwall), and a 2m-wide trunk and ramp conveyor system, each rated at 6500tph and stretching 3.8km from maingate to surface stockpile. The entire conveyor system from maingate through to ramp conveyor is based on a Dodge Controlled Start Transmission (CST) with electronic-hydraulic control system, a choice made by Oaky North after a global search for appropriate conveyor control technology.

The Dodge CST system provides full soft-start and torque/speed regulation of the conveyor, using an electronic-hydraulic control that allows the motor to come up to full speed under no load. Based on a wet-clutch brake/torque application system, the CST transmits torque to the output shaft simply by varying hydraulic pressure in its reaction disk system. Oaky North has been the venue for a number of CST firsts. The 11kV, 1100kW units on the ramp and trunk conveyors are the largest CSTs in Australia (there are three on the ramp and two on the trunk conveyors). Also, Oaky North’s two maingate conveyors feature Australia’s first right-angled CSTs (each rated at 1kV, 320kW).

John Clack, engineering director with Continental Conveyor, believes the CST offers clear advantages over other systems. “The CST was designed specifically for starting conveyors,” he said. “With the control of the conveyor on the low speed side of the gear box we can get quite accurate control for small changes in load.”

Clack said the simplicity and reliability of the CST control system, which had a single proportional relief valve controlling reaction disk pressure, was ideal for an application requiring such high availability levels. “We’ve had situations where under a relief valve failure, we’ve grabbed a PortaPower, turned on the motor and just pumped the pressure up to get the conveyor away under a controlled start — it’s that straight forward!”

The outbye conveyor system is also supported by a comprehensive underground-to-surface information and control system. Designed and developed by Brisbane-based systems integrator Nu-Lec Systems, the total underground system features about 3000 I/O and 4500 SCADA tags. Based around a network of Allen-Bradley Ethernet-enabled controllers (SLC-5/05s and PLC-5/40Es), the system is connected via a 5km surface-to-longwall Ethernet fibre network, providing data transfer rates as high as 100Mb/sec.

Controller technology was chosen according to functional requirements and budget. The SLC-5/05 small controller was selected for the conveyor systems, while PLC-5s provide the higher-end functionality and data handling required at the longwall. Although Ethernet provides the main backbone medium, Oaky North has opted to use Allen-Bradley Data Highway Plus (DH+) peer-to-peer communications at the longwall distribution control board, longwall substation and the longwall itself, with Ethernet on fibre as back-up.

Mining of the second longwall block at Oaky North started in early August. With 1.8mt mined in the first five months of production and monthly outputs already approaching 600,000t, the mine has exceeded early capacity estimates and is well on the way to meeting its March 2000 budget of 4.5mt.

“The future for the mine is really good; we’ve got a good workforce and the company’s invested in quality equipment,” said McLaren. “We should make a good profit this year. There’s not many in the current market that can say that.”

The Oaky North outbye conveyor and control and automation system both have vital roles to play in the mine’s drive to profitability. “The outbye system has the built-in capacity and reliability we need,” said McLaren. “It’s really just the conditions on the face that now determines how fast we can mine.”

Mastermyne's workforce is standing by awaiting processes to conclude for mine re-entry. 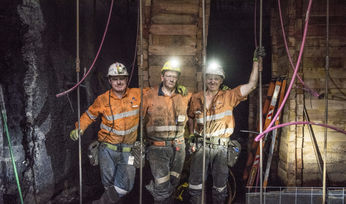 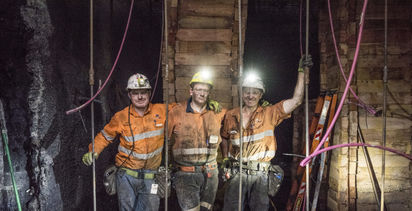