IMAGINE one of the coal industry’s past deadly ground control-related disasters: the miners lost, the families changed, the equipment destroyed and the mine forever altered, often irreparably. Then imagine the outcome with a warning that a failure was about to occur. It is no daydream, and technology has made it possible. By Donna Schmidt 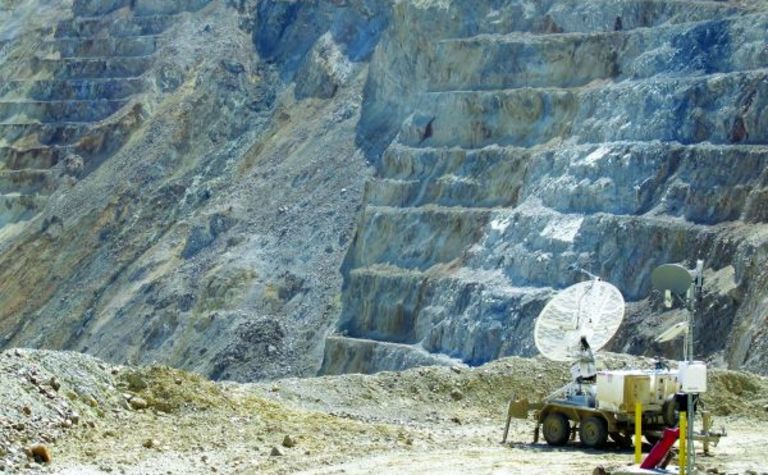 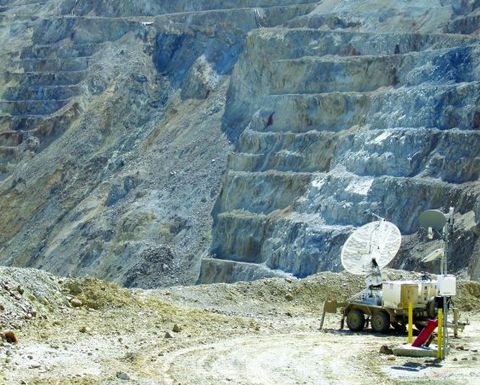 Kennecott Utah Copper’s Bingham Canyon complex, located just outside Salt Lake City, had that opportunity in April when the monitoring system it used warned of an impending ground failure, recording a movement of about two inches daily in the later stages.Experts could even estimate that the mine had a week, at best, to move people, equipment, utilities and other assets.

The massive operation, which even had a visitors center that gave the public a bird’s eye view of the spectacle of what some compare to its own functioning city, produced about a quarter of the nation’s copper in 2010 and 2011 and about 2% of worldwide production. It also produces the steel alloy component molybdenum as well as gold and silver.April 10 would be the day when a massive landslide contained within the walls of the mine finally occurred.

However, the mine had taken its crews and vital assets out of the area two days before, so no injuries were reported.“Pit wall movement is infrequent, but something we monitor for daily,” officials said in the hours after the event.

“Using sophisticated monitoring equipment, our highly trained geotechnical experts determined a slide would occur on the northeast wall of the Bingham Canyon mine. We proactively relocated workers, equipment and facilities away from the area well in advance of the slide.”

In a Q&A format statement to the media and public, Kennecott said every possible measure was taken to ensure the mine’s personnel, including moving miners to safe areas and limiting contact to the area of concern, and all employees were completely evacuated from the mine once the slide occurred.

Kennecott cited the rough Utah environment for the changing conditions that resulted in the slide, including rain, snow melt, freezing and thawing cycles and runoff.

However, the company also confirmed it put a contingency plan into place for any slides and projected no further failures.

Bingham Canyon: the next steps

While the producer said in the early stages post-slide that its production would be impacted, the true scope of that would become clearer in early May when officials said in a statement that it would lay off an unknown number of its staff as part of cost-cutting measures across the operation and that production would fall 50%.

“It is always difficult when jobs are lost because of the direct impact it has on individuals and families,” spokesman Kyle Bennett said.

On May 8, another KUC statement confirmed that Bingham Canyon workers eligible for retirement by June 2013 would be provided a one-time $20,000 resignation incentive for those under the complex’s collective bargaining agreement.“Our workforce is an important consideration in every decision that we make,” company officials said.

“However, additional changes to reduce operating costs may be required as operating plans are finalized in the coming months.”

At that time, Kennecott said it was still in the planning phases of its action plan and had still not determined the total workers that could be furloughed.

International group GroundProbe has developed several geotechnical systems, most notably the Slope Stability Radar (SSR). The company was incorporated in 2003 as an offshoot of an R&D program at the University of Queensland in Australia.

The project was partially funded by the Australian Coal Association Research Program, which requested a safety-critical monitoring system for the coal industry. The SSR remotely tracks slope movement in open cut operations, having diverse capabilities, including analysis tools for long-term trending and hazard identification, reporting tools for data collection and analysis, and even photographic and 3D radar imaging of mining areas to allow for identification and interpretation of slope movements.

Specifically, when the SSR finds an area of risk, members of management and, when needed, nearby equipment operators can be notified before a dangerous situation turns into a ground failure, potentially injuring or killing workers.

The SSR has successfully operated at altitudes of up to 5000m and in temperatures from -minus 40 Celsius to 55C, and in all types of weather. In general terms, different geotechnical monitoring systems are commonly used to provide complementary monitoring.

When an area of active slope movement is identified a real aperture radar unit is typically deployed to concentrate and study the movement in a safety-critical circumstance.

GroundProbe’s SSR system is RAR, a metaphorical fire truck of sorts, whereas the prism and SAR monitoring systems could be likened to a watchtower monitoring a broad area. Both types of systems run on a continual basis and send the associated data to officials. The SSR is used to gather more detail about the specific movements, origins and offer insight into the potential and track the issue may take.

In short, the system provides the future warning mines always wish they could have. Measuring nearly three miles across at the top and three-quarters of a mile deep, Bingham Canyon is one of the top three largest open-pit operations worldwide, so the placement of complimentary monitoring systems, including SSRs, at different points of the complex has ensured complete monitoring coverage.

GroundProbe has a US office in the heart of Tucson, Arizona’s mining country – works with many of the largest metal miners, including Bingham Canyon, in the US, Canada and Mexico.

However, none of those installations, with the exception of a trio of SSRs in place amid the metallurgical basins of Canada, are in coal operations.

While GroundProbe has also marked sizable growth in the mining industry, seeing particularly increasing interest from Canadian miners, the US coal circle has been silent.Company general manager for American operations David Ogan admitted the metal mine focus of the SSR technology in the US has resulted in less awareness in US coal mines.

However, at press time, no active US coal mine had taken the next step to put the system into place.It is not that the coal-rich areas of the world are vastly different than the nation’s coalfields. In fact, many factors of the Powder River Basin closely parallel those of the Bowen Basin in Australia, where GroundProbe has over a dozen SSR systems in active use.

The system also is not required for use at this point in time by federal regulators, another factor Ogan said might have a role in coal’s decision to remain off the bandwagon.

Whatever the reasoning, he noted, should GroundProbe make its foray into coal in the future it would likely have the same experience as those in the metals circle: increased miner and asset safety, higher productivity and the ability to conduct countless analyses with the data the SSR’s software collects.In fact, surprisingly enough, the SSR device itself is not the only heart of the system for those mines currently using the technology, it is what can be done with the information collected.

Much like at Bingham Canyon, operations have the capability to know that a hazardous situation is imminent, but they also have the ability to make use of measurements that pinpoint to the nearest tenth of a millimeter and a plethora of other figures, and all in one place – and in real-time, when needed.

Ogan said that coal mines would also be similar to other mine types in that an SSR system was not critical for use at every single operation. Some mines possess the geotechnical properties that make such monitoring ideal, and some do not.

However, the benefits are certainly there for the coal sector as a whole.

While it seems a large, productive copper mine in central Utah may be miles away from a coal highwall in Appalachia or elsewhere in terms of necessary tools and technology, both share some basic non-negotiable elements: a desire to be the safest mine possible as well as the most productive.

At Bingham Canyon, crews had days to prepare for an event thanks to the geotechnical monitoring systems employed by them to determine it was coming, even to the point of being able to evacuate and idle two days prior. While the scope of the event could not have been averted, there is no doubt that the warning saved miners’ lives as well as millions of dollars in equipment.

In coal, where mine safety is obviously paramount and the push for proactive safety measures is stronger than it has ever been, it is that ultimate goal of zero injuries and fatalities that could lend itself well to implementing such important technology.