THE operator of a large Virginia theme park who copped industry backlash for an “insulting” Halloween attraction depicting an underground mine disaster said he would not bring it back.

Called “Miner’s Revenge”, the attraction at Kings Dominion near Richmond was described by its developers as the aftermath of the worst coal mining accident in history.

“The families of missing miners begged for help but it was decided that a rescue was too dangerous,” the site said of the attraction, which it closed October 27 along with the park for the winter season.

“The miners were left entombed deep underground…lamps at their sides and pick axes in their hands, they are searching for the men who left them to die, waiting to enact their revenge.”

Despite its recent closure, it has received much criticism for its topic, particularly just a few years on since the Upper Big Branch mine explosion in West Virginia that took 29 lives.

It also appears to resemble the outcome of the August 2007 cave-in at Crandall Canyon in Utah, which killed nine.

The biggest critic has been the United Mine Workers of America, who called “Miner’s Revenge” an insult to the memories of miners have been killed in the nation’s coal mines.

“It’s very offensive for someone to try to profit off of our loved one's death and off of our pain, because this is very painful,” the brother of Rex Mullins, one victim of UBB, told the

Attorney Rachel Moreland, who was an official miner's representative during the explosion probe, told the news service that the attraction “commits a heartless act of corporate cruelty and desecrates the memory of UBB miners”

Kings Dominion initially said in a statement to media that the Halloween attraction, which included a maze, was not designed for nor intended to depict any specific situation.

Still, officials said on Tuesday that the controversial “Miner’s Revenge” will not be returning next season.

“As part of its regular rotation, Kings Dominion does not intend to operate the Miner's Revenge Halloween attraction next year.”

Too little, too late for West Virginia representative Nick Rahall, who said Kings Dominion showed “an appalling lack of sensitivity”

“Using mine tragedies for profit is an insult to a region built on the backs of miners,” he told the AP.

“Mine fires, collapses and explosions are not science fiction, or ghost stories, or the fantasies commonly cooked up for innocent Halloween fun. They are the all-too-real nightmares of miners and their families.”

The historical remnant of Queensland's tin mining legacy is a tourist attraction. 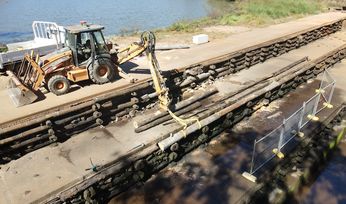