Arrests made in UBS MTR protest

FOURTEEN environmentalists were arrested and four are facing felony reckless engenderment and trespass charges following a Connecticut rally against financial firm UBS for its support of mountaintop removal practices.

The demonstration was held on Monday in Stamford by the groups Hands off Appalachia and Capitalism versus the Climate, with the four charged climbing about 220 feet of a construction crane to hang banners demanding that UBS halt its funding of MTR projects, according to local media including the Stamford Patch.

Others in the group entered the firm’s headquarters building on Washington Boulevard and chained themselves to the front door and railings.

Police officials said the group as a whole has been charged with various crimes including breach of peace, criminal trespass and criminal trover as well as conspiracy counts for each.

In pre-rally press the group said its protest in Stamford was part of a multi-state campaign against UBS to demand it halt investments to MTR operators.

“We wanted to put a human face on what we feel to UBS is just a bunch of numbers, to let them know there are real people affected by their funding decisions,” Hands Off Appalachia spokesman Mathew Louis-Rosenberg told the paper on Monday.

Post-event he added that he thought the protest event went well.

While it did not address MTR mining directly, UBS said it had established “processes and commitments” for responsible banking.

“We have developed and continue to develop policies and guidelines to identify, manage and control environmental and social risks in our business transactions,” spokeswoman Karina Byrne said.

The environmentalists said via Twitter that they were seeking donations to bail out members still being detained.

The group, called Health On The Frontlines, were protesting against the health effects of coal. 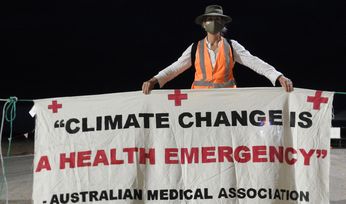 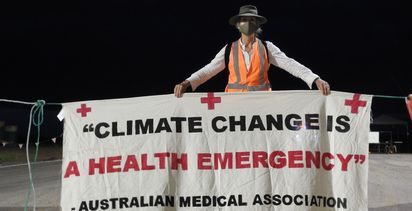 Arrests made in CT anti-coal protest