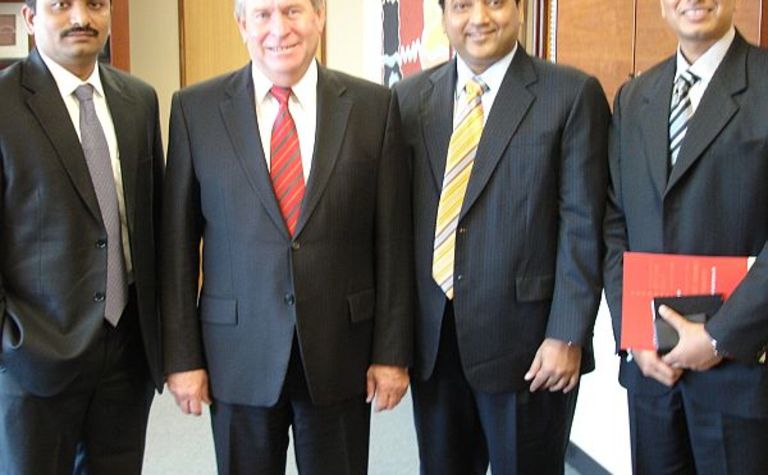 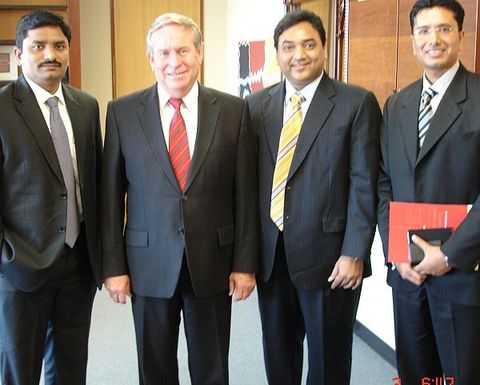 Lanco chairman L. Rao is to the right of WA Premier Colin Barnett.

Lanco chairman Madhusudan Rao and other company executives met with WA Premier Colin Barnett in Perth to complete the transaction.

“We were very pleased to have a successful meeting with the premier this week and we received a positive response to the completion of this acquisition and our development plans,” Rao said.

“We are focused on growing the Griffin coal business, and further developing the mining and infrastructure facilities in the region.”

Infrastructure development is likely to include participating in the development of Berth 14 at Bunbury’s port.

Lanco said the development of additional facilities at the port would allow Griffin’s mine production to ramp up “four-fold” to more than 15Mtpa.

This would be accompanied by further rail development to Bunbury from the Collie-based mines.

“We believe these development plans and additional investments will support significant growth opportunity, economic development and employment generation in the region,” Rao said.

Under the management of KordaMentha since it entered voluntary administration in January 2010 with more than $1.8 billion of outstanding debt, Griffin started making export shipments to India, with the coal railed to Kwinana’s port.

Back in September, Construction Forestry Mining and Energy Union WA’s secretary of mining and energy Gary Wood revealed the company was producing about 1Mtpa of export coal and about 2.7Mtpa for the domestic market.

The Griffin Energy assets, including the $1.2 billion Bluewaters power station in Collie, remain in a sales process.