Make sure the force is with you

A REVIEW of the basic geometry of longwall supports currently in use in coal mines in Australia has highlighted the potential for conflicting interaction with the mine roof. By Ian Dunn*

Longwalls have been operating in Australia in some form for more than 100 years. Powered supports have evolved over the past 50 years to capacities virtually unimaginable at the beginning. However, in some mines certain supports can respond in ways contrary to expectations.

Lemniscate linkages ("scissor" type links) have been added to supports so the canopy will follow a nearly vertical path during raising and lowering while being able to resist general relative sideways movement of the canopy.

The path the canopy follows is often referred to as the "S" curve due to the shape of the small variation in "tip to face" distances over this range. Pivots in the supports have a certain amount of slop when new which increases with wear and corrosion over time.

This slop is evident by the tip of an unloaded canopy being able to be pulled horizontally a small distance towards the face. Figure 1 shows a typical chock with the S curve, with boundaries corresponding to the offset of a smaller pin in various sides of the bores. Being raised and lowered in the workshop, a support will follow the path shown to the right. If the canopy tip were pulled toward the face the path followed would be the one to the left. (If the bores were tight the canopy would follow the middle curve.) In an underground situation the force of the goaf on the rear of the shield will cause the support to raise in the region between these two extremes.

Two legged supports working in certain roof conditions were observed to be superior to four legged supports. This was explained by the forward tilt of the legs exerting a force toward the face. The horizontal component of the leg force was transferred to the roof via friction and tended to hold the roof in compression rather than allowing tension to develop which could open up any cracks in the roof strata.

Some geotechnical reports note the force of the support legs pushing the roof toward the face. But depending on support design and operating conditions, it is possible at times to achieve the opposite effect. Some supports can at times place tension on the mine roof during set or convergence.

During longwall mining there will be some convergence of the roof -- more pronounced at times of periodic "weighting" -- but normally relatively small for operating longwalls. Critical convergences can occur if the longwall is stationary for extended periods of time.

The angle of roof convergence is the angle formed by roof and floor convergence and the amount the roof moves toward the goaf relative to the floor.

Some tests were done in Britain in the 1970s and this value was measured at 11 degrees off the vertical and down toward the goaf. I can find no evidence of this angle of convergence being measured in Australian coal mines. The importance of this angle is in its relationship to the geometry of the support.

During mining the supports must also follow the seam. A certain amount of undulation occurs during horizon control. If the support were kept to, say, below four degrees off the horizontal then for the British coal mine investigated the angle of the support path under lowering (leg yield) would need to be less than seven degrees to ensure no negative interaction with the roof under convergence.

All supports investigated were below this value for Britain. However, if the angle of convergence in Australian coal mines is less than this British angle, or supports are inclined at angles in excess of four degrees, then negative interaction with the roof may occur depending on chock geometry.

Builds on training components of its predecessor. 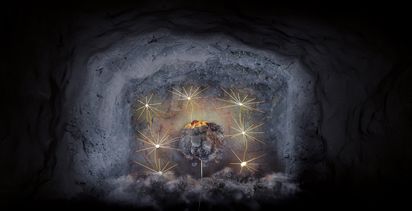 A TRUCK YOU CAN DEPEND ON