WITH aspirations to be the Steven Spielberg of the mining industry, former Cumnock No. 1 mine manager Godfrey Adamthwaite is well on his way - shooting promotional, training and induction videos for the whos who of the longwall industry. 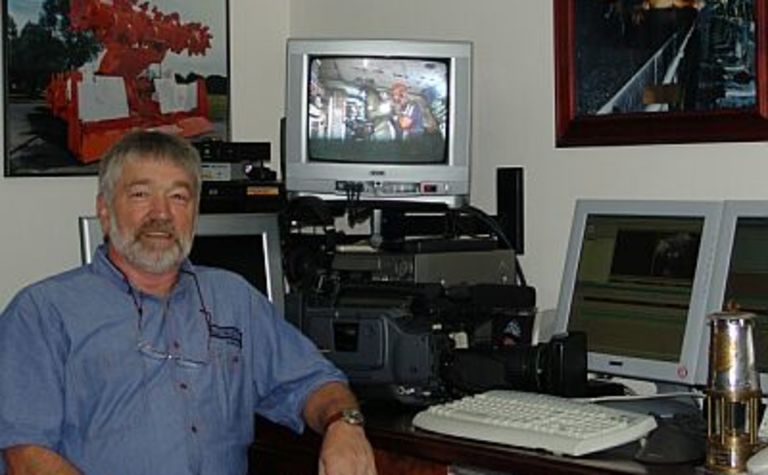 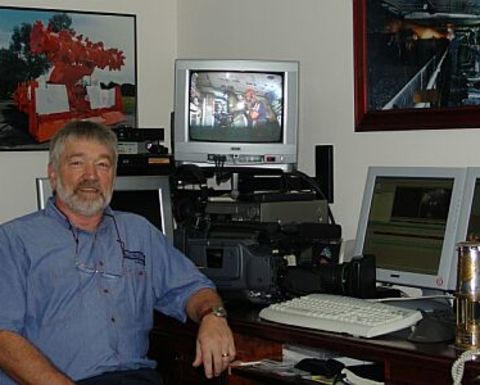 While Godfrey’s production company Silky Oaks Video Productions now takes up all of his time, just a few years ago he was deeply immersed in the longwall industry. He first started in the coal industry as an apprentice electrician in 1963 at Aberdare North, Stockrington No1 and Liddell Colliery - where he finished his apprenticeship and studied electrical engineering. He then worked as a shift electrician and leading hand electrician at Liddell Colliery up until 1977.

For a two year stint he was conscripted and served as a National Serviceman in the Australian Army but on returning from the army took up his position back at Liddell Colliery where he met mentor Stan Pitrans and started his mining studies.

In 1982 he returned to Liddell State Coal Mine as a shift undermanager and in 1983 was promoted to undermanager in charge and continued his studies gaining a managers certificate.

Godfrey’s longwall experience began in 1985 when he was given the task of introducing longwall mining in to the Hunter Valley coal fields and Liddell State – “the following few years were trying,” he said.

In 1992 he was made deputy manager / longwall manager as his team proceeded to plan for longwall mining in the Pikes Gully Seam. Two years later he was made mine manager of Cumnock No1.

“In 1997 there was major changes in the company and I decided I had been in the dark long enough. With my wife’s approval I resigned with the express goal to turn my lifelong hobbies of film and photography in to hopefully a viable business,” Godfrey said.

“I spent more money than I had and upgraded to a multi camera production company providing Digital Broadcast production and editing facilities capable of productions in both 4:3 and wide screen 16:9 screen ratios. We use a range of Sony DVCAM broadcast digital video cameras and sound equipment.”

He recently completed a series of training videos for West Cliff Colliery on the introduction of its new longwall face.

GA: Standing on a working platform at a new inset with my father (undermanager) and several other men. We were at the 400m level in the downcast shaft of Gordon House Colliery in the North of England in the middle of winter in 1960 and I was 11 years-old.

GA: I wanted to be an electrician, my father saw mining as a good career, so we compromised and I became an electrician in a coal mine (Aberdare North Cessnock Coal Field 1963).

GA: As a youth bringing the horses out of the pit for the weekend at Stockrington No1 Colliery. As a mine manager having meaningful discussions with the CMFEU.

GA: Stan Pitrans - a mining teacher who convinced me to continue with mining studies.

GA: Being the mine manager of Cumnock No1 when the shares were worth $2.00 plus.

GA: Bulk soap on tap in the bathhouse - just joking, mine atmosphere monitoring in real time and tube bundle. Most other developments have been a natural progression or an improvement of something that was already in use.

GA: No, the guy’s at the face hold the records. Records today become tomorrow’s expected goal and it doesn’t work.

GA: Yes, to become the Steven Spielberg of the mining industry (ask Nick Wills of NBW Mining to explain this).

GA: Being interviewed by the Ray Martin Midday Show film crew with Cumnock’s first open cut in the background with a large excavator bursting into flames (just out of the shot thankfully).

GA: My first mines rescue training run in a sealed area at Aberdare North, and realising that if I spat the mouth piece out and there was nothing to breathe.

GA: Death in the workplace.

GA: I think the technology has been around for quite a while, but the variables are many. Who would be game to be the first, if it worked you would be a hero if it failed you’d be out of work.

GA: Longwall equipment has progressively become bigger thus components have become heavier - just how much can one guy carry? Instead of bigger let’s get smarter.

Solid board to maximise potential 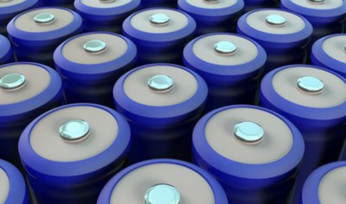 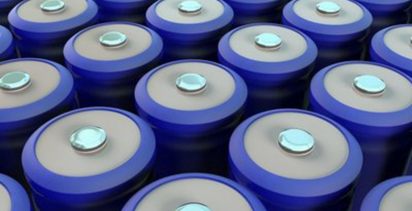 Rio in its rights to sack swearer, says Fair Work