IR rallies kick off across Australia

PROTESTS against the Federal Government's industrial relations laws are underway across Australia for today's nationwide day of action. But Workplace Relations Minister Kevin Andrews says lower than anticipated numbers at the Melbourne Cricket Ground show most voters are not concerned with the changes.

Unions were expecting record turnouts for their rallies in all of the capital cities and hundreds of regional centres which are being linked by satellite to the MCG.

However, according to reports, by 9.15am (AEDT) a crowd of around 50,000 people was gathered inside the MCG, although organisers were hoping for around twice as many.

“The less than expected numbers send a clear message that reflects the fact that in the six months or eight months since WorkChoices came into operation, we've seen growing jobs in terms of numbers, record low unemployment, wages continuing to rise, record levels of low disputation in the workforce," Andrews said.

“And this was reflected by the fact that the overwhelming majority of people were at work today.”

Australian Chamber of Commerce and Industry chief executive Peter Hendy agreed with Andrews, claiming the lack of people at the MCG showed that the union campaign “was a fizzer”.

“I welcome the fact that the overwhelming majority of Australian workers and businesses today got on with the job and shunned union protests against workplace reform,” Hendy said.

“Despite a major publicity blitz and a yearlong campaign against WorkChoices, according to media reports significantly fewer people attended today’s ACTU National Day of Action rallies than those held in the middle of the year.

“Reports suggest that significantly less than 100,000 people attended today’s trade union rallies around the country, with a large proportion of these protesters state public servants and regular union and political activists.

Hendy suggested more members of the public were inconvenienced in going about their daily life by today’s union rallies than people turning up to them.

“ACCI has calculated that every 100,000 people that left the workplace for these political rallies cost GDP some $31 million,” he said.

But Labor's industrial relations spokesman, Stephen Smith, who was at the Melbourne rally this morning, said the MCG was about three-quarters full and two or three train lines were down, which did not help.

Smith said the attendance was also affected by the fact that the rally was being shown live in hundreds of venues around the country and also because of the IR laws with people fearing they would lose their job if they attended.

“Our determination has strengthened, we will not allow the rights, the wages, the working conditions, that have been won over the past 100 years, to be swept away," she said.

“Together, we are building a movement for change."

In Sydney thousands of protesters marched to Bridge Street with the union estimating 150,000 people will join the protests at almost 200 venues across New South Wales.

Meanwhile, the cultural forecourt at Brisbane's Southbank is crowded with thousands of workers with a large contingent of Construction, Forestry, Mining and Energy Union and Builders Labourers Federation members.

Unions estimate that over 2500 people have marched through Hobart to protest against the IR laws.

The coal supporters rallied at the same time as a global strike by school students. 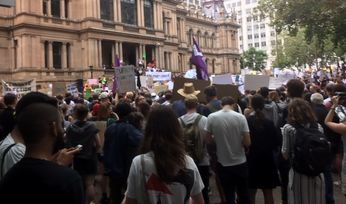 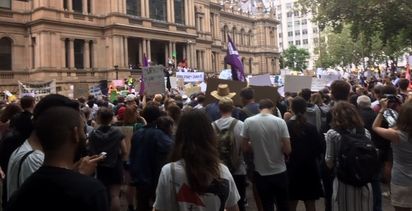