US MINE Safety and Health Administration investigators have cited the operator of a southern West Virginia mine for issues that contributed to a March 2013 fatality, including non-compliant equipment and inadequate roof bolter training. 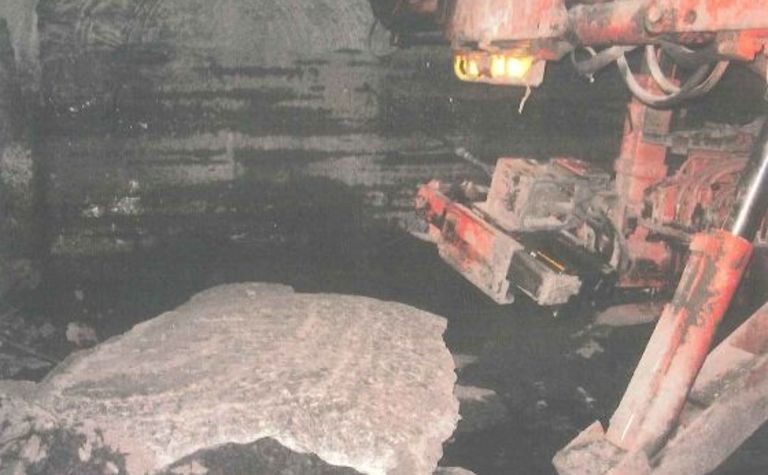 The scene of a March 2013 fatality in West Virginia.

Roof bolter operator Asa Fitzpatrick, 63, was killed March 3 at Newtown energy’s Peerless Rachel mine in Comfort, Boone County, when he was struck by a section of roof rock.

He was at the last row of installed roof bolts at the time, installing a rib bolt into the mine’s 8 Right crosscut on the No. 1 section.

“The large roof rock fell and tipped toward the roof bolting machine, pinning the victim between the drill head and the rock and caused crushing type injuries,” the agency said, noting the worker had just installed glue resin and the bolt in the completed hole when the fall occurred.

A review of the scene indicated the rock that killed Fitzpatrick weighed about 2200 pounds and landed about five inches outby the front edge of the unit’s automated temporary roof support.

“The roof rock that struck Fitzpatrick fell in such a manner that the portion of rock closest to [him] pinned and crushed him in a semi-upright position against the inby edge of the drill mast,” investigators said.

“This placed [the victim] at the inby edge of the drill mast with only 12 inches of clearance to the front of the ATRS … [and] at least a portion of his body was under unsupported roof when the rock fell.

“Based on the evidence at the accident scene, Fitzpatrick apparently positioned himself in this manner in order to insert the resin clue and the roof bolt into the hole.”

The killed worker had more than 24 years of mining experience, and had been at Peerless Rachel 38 weeks at the time of the rock fall.

However, in an overall review of records, MSHA determined that the mine’s roof bolting machine operators had not received the mandated specific training on the use of hydraulic drill guides or training in the use of resin insertion tools as part of task training.

“Roof bolting operators were allowed to position themselves in front of the roof bolting machine drill mast at the automated temporary roof support during rib bolting operations,” investigators concluded in the report.

The operator also was required to provide additional task training to operators, including specific training on hydraulic drill guides and resin insertion tools.

Operator Newtown Energy is a division of Patriot Coal.