IF IT has tracks we can fix it. That should be the motto of Trackspares director Brad Oats. Supply Side by Australia’s Mining Monthly editor Noel Dyson

A Trackspares worker getting ready to rebuild a worn excavator track link. Note the damage to the drive lugs on the top.

Be it excavators, dozers, crushers and compactors, or drill bases, Trackspares has set itself up so it can replace or repair their tracks and undercarriages.

Trackspares, which grew out Trackex, has been run on Australia’s east coast since 1998.

Trackex was a business based on servicing the undercarriage of tracked earthmoving equipment, predominantly in the coal sector.

The Toowoomba, Queensland headquartered company recently opened a facility in the northern Perth suburb of Neerabup to try and break into the iron ore market.

“We have a 380t track press here that allows us to assemble and disassemble track chains,” Oats said.

“We have a fully equipped boiler maker bay, complete with a 32t lifting capacity.”

The company had representation in WA for the past five years but about three years ago it decided to invest significantly in the Neerabup facility.

That was about a $3 million investment.

In some ways the timing could not have been worse, with the iron ore price falling to its lowest point for some time. In other ways though, it could be an ideal time.

With today’s commodity prices it is about getting more from less and boosting productivity.

Oats said that had opened the door to the likes of the BHP Billiton and Rio Tinto, which were both considering aftermarket rather than original equipment manufacturer equipment for the first time.

And why wouldn’t they? Consider this.

The track on a Komatsu PC3000 excavator costs about $650,000 new. Over time the drive lugs on the track wear away to the point that the track slippage gets too great.

At this point the track is taken off and replaced with a new one and the old track is discarded.

In mining it seemed a $650,000 component was effectively a consumable item and managers had little problem with that.

This is where one of Trackspares’ secret weapons, equipment whisperer Kevin Abbott comes in.

It would be fair to say the ground Mount Gibson was working in was challenging. One description of it was: “It’s not exactly hell, but you can see it from here”

Abbott came up with a curved lip bucket design – similar in a way to a garden spade – that helped the bucket cut into the earth better along with a number of other improvements.

He is working with Trackspares these days – where he may even go back to bucket building, beefing up the company’s ground engaging tool offering – and can bring those old excavator tracks back to life.

“You just need to build up the steel in the drive lugs,” Abbott explains, making it sound a lot easier than it actually is.

The end result of that though is a refurbished track with about the same service life as a new one for about half the price.

Oats said because the company had the Perth facility in place it could take the next step.

“We know how stuff wears. We know how to deal with things such as track frames.”

Besides its workshop offerings, Trackspares also has a mobile maintenance service that can go out and fix tracked equipment on site.

“It’s a very industry specific type of service that we offer,” Oats said.

Trackspares also has its own factory in Korea that turns out its KBJ brand of undercarriage parts.

“We have an extra 7mm in rail height,” Oats said.

“We’re talking up to a 30% extra track life in certain circumstances with savings anywhere from 15-20% on the OEM [original equipment manufacturer].

Trackspares accounts and business development manager Stuart Shand said no other manufacturer made a chain or link like it.

“This chain has been developed, and is assembled, by us in our track shops,” he said.

“As well as the D11 chain we have developed products to suit most chain and plate style machines currently in use in mining.

“We rebuild track frames to at least the same standard that the OEM workshops do, for around 70-80% of the cost using either genuine or aftermarket items.

“We rebuild or remanufacture large excavator idlers and tumblers at about 40% of new OEM replacement.

“During this process we source both local and overseas materials, selecting those that we know are of the very best quality for very much less than the parts are available from the OEM.

“We can get track shoes and rebuild them for about one-third of the cost to buy them new.”

Exchange undercarriage parts for excavators and dozers is another Trackspares offering.

“We rebuild and remanufacture undercarriage parts for bulldozers and excavators that would have to be stood down due to lack of availability,” Shand said. 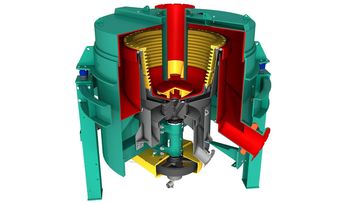 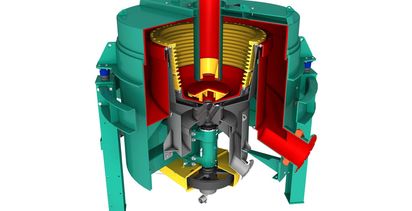