A pint with Gary Gibson 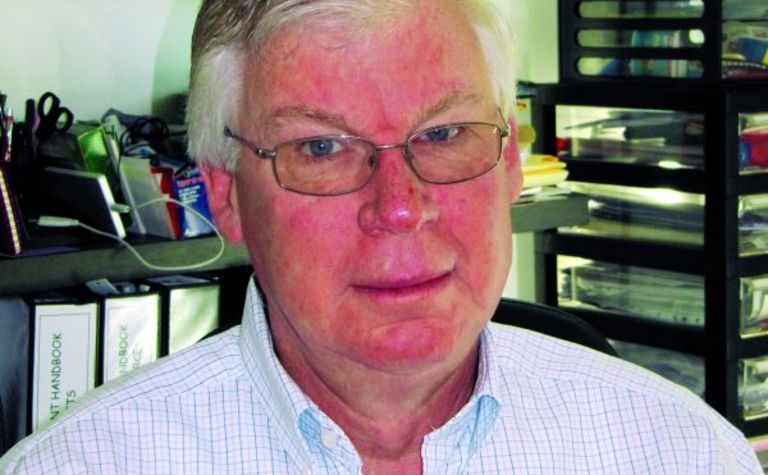 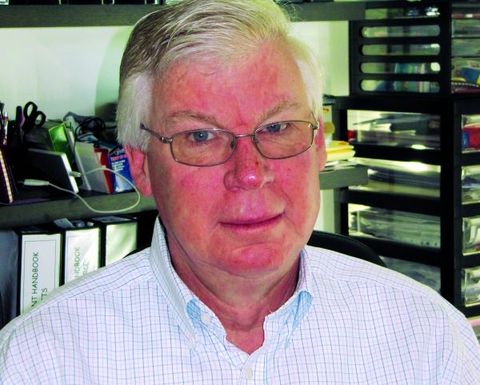 Australian Longwall: You’ve been everything from an undermanager to a chief executive. Can you give us a rundown on your underground experience?

Gary Gibson: As a Mining Trainee with BHP Collieries in the Newcastle region mines, namely John Darling, Stockton Borehole and Burwood, in the late 1960s early 1970s I had the opportunity to get a grounding in bord and pillar development with track mounted and tracked “conventional” mining and drill and blast systems, bord and pillar development, and extraction with continuous miners using open ended lifting, timber supports, and Joy 1CM continuous miners. This was complemented with shortwall mining experience with FSW two-leg hydraulic supports and continuous miners at John Darling, and with longwall mining experience subsequently gained at Stockton Borehole and Tower Colliery during introduction of the first longwall faces at these two mines.

Cook Colliery was my first posting as Colliery Manager in 1974 and I was responsible for establishing and operating the mine over its first eight years of operations and, with involvement at the nearby Leichhardt Colliery, I gained a healthy respect for the difficulties of mining the Rangal coal measures.

Following a stint at the then Kooragang Coal Loader as operations manager during the loader’s construction and commissioning stages and stints at Lambton and Stockton Borehole as colliery manager, I had the opportunity to move south to the Illawarra where I gained experience in the technical services role, and as colliery manager at Tower before taking up the regional operations managers role. My time in the Illawarra gave me an opportunity to get a good insight into the challenges of mining at depth, high gas domains and outburst conditions.

Over the last 10 years the primary focus has been on roadway development, initially from a contract mining perspective in both mains and gateroad development, and more recently with ACARP’s Roadway Development Improvement Project. I recently had the opportunity to put it all into practice again during a short posting to Cornwall Coal in Tasmania, and assisted with the introduction of the first miner-bolter into that operation and also learned about the development of the Duncan pillar extraction method.

It’s terrible looking back and finding out that many of the mines I have been involved with are closed down and are now just historical footnotes.

AL: How do you manage to bring all the sectors of a mine workforce focused on a result?

GG: Some of my early mentors were pretty tough managers – do it my way or the highway, and I think that may have shaped my early time at Cook. As a consequence the mine had a few too many days off at times, and reverted to a seven-hour shift operation “on principle”.

Following his appointment to Blackwater, Bill Beath was instrumental in challenging me to find other ways of managing, and over the next 4-5 years I believe we did in fact do things differently – in the late 1970s we introduced what were later referred to as “quality circles” to identify and address productivity-related issues, and went through a major review and rationalisation of the Blackwater operations which resulted in the closure of Leichhardt and subsequent sell-off of Cook with a minimum of time lost – all through involving and working with people, and communications, communications and communications. I still have my early newsletters from Blackwater and Tower.

The introduction of Total Quality Management to BHP Collieries in 1989 reinforced these principles of involving people and improving communications, with quarterly on-shift pit top meetings being introduced at all mines on all shifts as a means of improving the workforce’s understanding of the business imperatives and need for productivity improvement.

So my counsel to any aspiring manager is to get out and about and look at what people are doing and listen to their problems, and with that understanding develop a strategy which involves people directly in solving their real problems. The challenge then is to regularly, consistently, day on day communicate with employees about business performance and progress against the improvement strategy, preferably by face to face, one-on-one, and one-on-crew or even one-on-shift meetings.

AL: And then there is the business plan. Do you have a head for figures?

GG: I would like to think that I have a good understanding of mining economics and what drives the bottom line, although I would probably admit to being more focused on investing in capacity and systems to achieve an outcome, than to cutting costs to massage the bottom line.

A challenge I am currently wrestling with is that of development economics – I see mines that commit three, four, and sometimes five development units to achieve longwall continuity while others achieve longwall continuity with two, or even as little as one single development unit. Each development unit probably costs around $10 million in capital to establish, and $8-10 million per annum to operate, costs which rapidly pale into insignificance when lost longwall production results in losses of $1 million per day (or more). I believe the solution is to invest more in people, technology, and process management to improve the inherent capacity, than to increase the actual number of development units. The trouble is that as an industry we don’t do those things (people, technology, and process management) very well.

AL: You’ve had to deal with some difficult conditions at Tower and Stockton Borehole. Could you describe what the challenge was in both cases?

GG: At the time Tower was an amalgam of workforces, with employees drawn from some four other mines that had closed down in the region together with a nucleus of the mine’s original mine construction workforce, with all of those individual mines having the best way of doing anything.

On top of that, 450-tonne capacity two-leg longwall shields were being introduced into a region where conventional practice suggested +600-tonne capacity four leg chocks were more suited, the phenomena of stress-notching on face ends was then not understood (a phenomena compounded by very high horizontal stress levels), and there was probably insufficient investment in refurbishing the longwall equipment on its transfer to the mine. Further, the mine had experienced outbursts which drove down development rates and production bonuses, making it perhaps the least preferred place of employment for the majority of the mine’s workforce at the time.

The conditions experienced at Stockton Borehole at that time were again associated with the introduction of longwall mining to a bord and pillar mine. However, in this case, it was perhaps more to do with the low seam section being mined (1.35m), the hardness of the sandstone roof and floor material, and longwall equipment-related problems such as shearer motor and AFC haulage capacity, and AFC/BSL transfer design. The challenge then was to get these issues identified and to focus resources on addressing the issues in parallel with maintaining routine operations.

On-shift meetings were conducted with longwall crews to identify the problems, with the management team then developing and implementing an improvement strategy coupled with regular progress updates to the workforce. A similar process was then utilised to develop strategies to successfully mine into a pre-driven longwall recovery road, the first undertaken in the industry after first being trialled at Newstan.

AL: On the operational research front, what kind of ideas have you been thinking up?

GG: While perhaps not directly “operational research” the areas that I consider warrant considerable research are the introduction of automation in the workplace, particularly as it relates to the roadway development process, the effective introduction of new technology, equipment and practices (or managing change in the workplace), and process improvement through the application of lean thinking.

AL: And how have you been developing in the roadway development department?

GG: I suspect that my role with ACARP’s Roadway Development Task Group may be becoming almost a passion. It certainly has given me a good opportunity to see what people are doing across the industry, to develop an informal roadway development network, and to assist in the transfer best practice from mine to mine.

It’s also great working closely with the researchers and OEMs who are developing and introducing new roadway development-related technologies and equipment such as continuous miner navigation and control systems, automated bolting and meshing systems, monorail and conveyor advancement systems, and continuous haulage systems.

The Roadway Development Task Group has recently extended its CM2010 vision to hopefully bring to fruition by 2015 a high-capacity roadway development system capable of safely producing at sustainable rates of 10 metres per operating hour, 20 hours per day. I hope I am both able and permitted to continue this journey with ACARP.

AL: I understand that you are a gentleman vintner with a vineyard just outside of Canberra. What kind of grapes do you grow?

GG: Few would probably agree that I am either a gentleman or a vintner; however, number one son and I do have a small (1.5-hectare) vineyard near Bungendore, which is where I spend most of my spare weekends playing with my grapes and also catching up with three granddaughters. The vineyard was initially established by others in 1998 and we now have mature chardonnay, sauvignon blanc, and merlot vines, with our pinot noir vines coming into production next vintage. We contract the Lark Hill Winery to produce our wines and so far have been able to get a bronze medal winning wine each year.

We might think its hard working in the mining sector, but what I have found is that you probably have to be nuts to invest or work in the rural sector – just when you have nicely pruned, fertilised and tended the vines, along comes either a frost, extremely hot conditions or drought, extensive and unseasonal rain, mildew, bugs or any one of a number of nature’s challenges to put the crop at risk. Reminds me of another of my hobbies from Central Queensland days – sailing – the definition of which is a hole in the ocean surrounded by fibreglass into which you continually pour money. At least in the vineyard I shouldn’t drown.

AL: What is your label, and what can you recommend to other wine connoisseurs out there?

GG: Our wines go under the Yarrowlumla Estates label, a name coined from the now amalgamated Yarrowlumla Shire and which also has the same derivation as Yarralumla, the governor general’s residence (which is also quite fitting given my initials). We are doing a pretty good chardonnay and/or sauvignon blanc most years; however, the merlot is proving to be a little problematic and difficult to ripen fully. Hopefully our new pinot noir vines will give us an opportunity to develop a good red. My recent sojourn in Tasmania certainly opened my eyes to how good a good pinot can be, We could possibly graft pinot onto the older merlot vines.

AL: Are there any similarities to running a longwall operation?

GG: Probably not other than hard work, lots of opportunities to spend money, and the number of uncontrollable variables.

AL: You’re a big believer in an “integrated operations” management system. Could you explain what this means?

GG: When this was topical, mines were typically structured along functional lines, for example mining electrical and mechanical,with each function separately supplying resources to the various development, pillar extraction, or longwall mining activities withlittle real coordination and cooperation between the various functions.

Integrated operations firstly focused on integrating mining and maintenance planning to coordinate activities across the entire mine operation, which subsequently led to the development of individual process streams such as development and longwall operations, as now widely adopted.

Old hat now, but then it was different and sometimes difficult to get the mining and engineering functions to work to common goals and objectives.

Some of my early mentors were pretty tough managers – do it my way or the highway.

On site at Koolan Island geotechnical works on the main pit footwall are continuing. 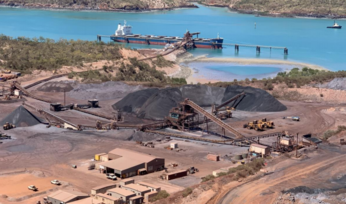 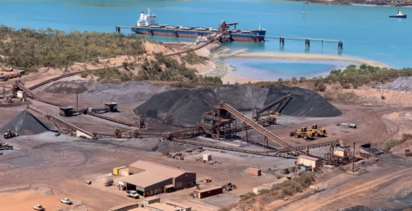