NATIONAL contractor Abigroup has commenced paving on the western section of the Hunter Expressway.

The first section of the expressway to be paved in the 27km western section of the project is a 1.6km section west from Allandale interchange to Camp Road (northbound and southbound).

It is estimated this section will use 3200 cubic metres of concrete and take one week to complete.

“In this particular section of road we are laying the sub-base, which is the lower of two concrete layers that make up the pavement,” he said.

Using concrete from its batching facility on the new road alignment at the Allandale interchange, Abigroup will transport the concrete mainly via the new alignment to its point of placement instead of using the public road network.

When completed in 2013, the $1.7 billion Hunter Expressway will provide 40kms of four-lane divided freeway linking the F3 Freeway at Seahampton with the New England Highway west of Branxton.

It will also provide a new arterial route between Newcastle and the Upper Hunter. 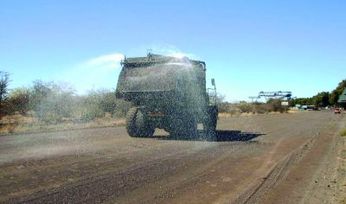